Women and ADD — The Hidden Disability

What You Need to Know About Attention Deficit Disorder 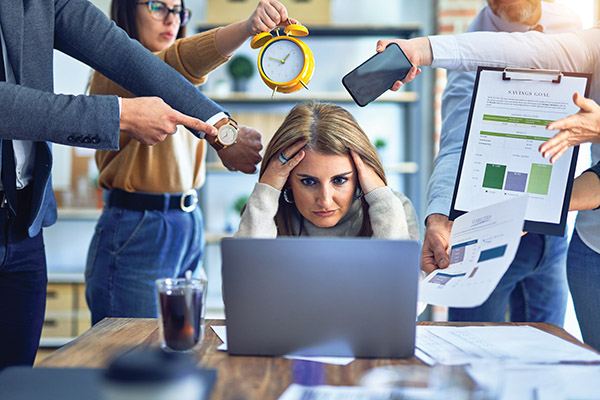 According to Sari Solden, in her book Women with Attention Deficit Disorder, “Almost all women find that life today is complex, upsetting or frustrating, but they are still able to meet most of [life’s] demands reasonably well…. For women with untreated Attention Deficit Disorder (ADD), however, the demands of daily life can be crippling. It cripples their self-esteem, their families, their lives, their work and their relationships.”

ADD, also known as Attention-Deficit Hyperactivity Disorder (AD/HD), affects between three and five percent of the population. However, adult ADD, especially as it appears in women, often goes unrecognized.

CHARACTERISTICS OF ADD IN WOMEN
The symptoms of ADD are many. Some are more commonly seen in women and opposite the more recognized symptoms seen in men. This makes detection unlikely and diagnosis difficult. Each person’s experience with ADD is unique. While there is a multitude of characteristics, most women with the disorder don’t have every symptom. Instead, each woman has a mixture severe enough to impair some areas of life.

Mental vs. physical disorganization
Disorganization is typical and often a severe problem for women struggling with ADD. They may be unable to organize their homes, offices, or lives. To outsiders, the disorganization isn't always visible. That's because women who lead professional lives may have assistants, secretaries, and cleaning services to assist them. Some ADD women have a partner who compensates for their organizational dysfunction, as well.

Hyperactivity vs. hypoactivity
Women with ADD can be at either end of the spectrum, either hyperactive or hypoactive (underactive). Hyperactive women may go at full speed until they crash from the overload.

Family life can also suffer from a hyperactive mother. She may be unable to sit and play games or read to her children unless she finds the activities stimulating.

Many women with ADD are at the other extreme. They're hypoactive, unable to muster the energy to do much of anything. These women are often unable to keep up with life's many demands. Maintaining a home, participating in family activities, staying in touch with friends, even holding down a job can be a significant challenge.

Inattention vs. Hyperfocusing
The problem is women with ADD struggle with the inability to regulate attention. So, it doesn't mean they can never maintain attention. Instead, their ability to focus is based on interest and whether the activity is stimulating. Many women daydreamed through school when they were younger. Yet the subjects or activities they found fun, interesting, or exciting didn't pose such a problem. Adult life with ADD is often the same.

Hyperfocusing, which is the opposite of inattention, also poses problems and can coexist with symptoms of inattention. While it may be challenging to focus on some things, a woman may hyperfocus on that which interests her and be unable to shift her attention. Hyperfocusing can last for hours, days, and longer and makes it difficult to break for important matters. Meals may be forgotten, and family members can carry on conversations without being heard. So hyperfocusing puts a strain on the family. If a hyperfocused woman does manage to break away from what she's engrossed in, she may wander aimlessly and forget what she's doing.

Impatience and Impulsivity
Standing in lines, sitting in waiting rooms, and being placed on hold for lengthy waits drives some women with ADD to the brink. So, they may avoid these situations altogether. Women with ADD may be impatient either visibly or internally or act impulsively. Minor nuisances can cause significant agitation. Other women with this disorder can maintain their composure yet still feel anxious and annoyed.

Women with ADD may also be impatient about life and events. A woman may plan her whole education or entire life in one day and need for it to happen immediately. She goes into things full swing rather than step-by-step. As a result, women with ADD may have a change of heart after much investment of time or money or feeling spread too thin, with too many goals to achieve.

Impulsiveness is seen when women with this disorder act or speak without thinking. This often leads to trouble by spending impulsively or jumping into relationships and even marriage. Some struggle socially and interrupt conversations or blurt things out they later regret.

Mood
Mood swings, being overemotional, or easily frustrated is another problem. For some women, having ADD is like being on an emotional roller coaster. Extreme mood shifts sometimes lead to a misdiagnosis of bipolar disorder, though the two can coexist.

Women with ADD are frustrated by the slightest aggravations. A simple mistake seems a major ordeal and may result in anger, storming off, and dropping a task altogether. If interrupted in the midst of something, a woman may become irritable and annoyed.

Depression, although not a symptom of ADD, often coexists or is a result of the debilitating disorder. Depression in the ADD woman may stem from a lack of self-worth because she's unable to hold down a job or adequately care for her family. It can also result from not achieving up to potential because of attention problems or the inability to stick with things. It also sometimes comes from feeling overwhelmed. This feeling can dominate the life of a woman with this disorder.

THE CAUSE OF ADD
Research indicates ADD is a neurobiological disorder with a strong genetic link. According to the nonprofit organization Children and Adults with Attention Deficit-Hyperactivity Disorder (CHADD), complications during pregnancy, labor, and delivery, exposure to nicotine or alcohol during fetal development, or several other environmental factors may also play a role in the development of ADD.

Doctors often diagnose the depression that accompanies ADD, but miss the ADD itself. Women, more often than men, have coexisting anxiety and depression, which must be treated as well.

Also, women who are more hyperactive, hyper talkative, and impulsive are sometimes misdiagnosed with bipolar disorder.

Many doctors still look for signs of ADD more typical of boys. Many doctors fail to understand that ADD symptoms in females often don't appear until puberty or later because of hormonal fluctuations. When girls enter adolescence, during PMS, and as estrogen levels drop in perimenopause and menopause, the symptoms of ADD often worsen.

Also, girls tend to try harder in school, so their ADD patterns are often masked or overlooked by teachers.

TREATMENT OPTIONS
Several treatments are available for ADD. The most effective is a prescription medication. There's a multitude of stimulant and non-stimulant drugs available for treatment.

Behavioral therapy is also beneficial for both coming to terms with the lifelong disorder and to relieve negative coping behaviors. Coaching is also useful for learning new skills and strategies for structuring life. Because ADD is neurobiological, therapy and coaching work best in conjunction with medication.

Several ineffective treatments are on the market, as well. Suspect therapies, according to CHADD, include dietary plans such as the Feingold Diet and vitamin and mineral supplements. Other treatments that lack evidence include anti-motion-sickness medication, Candida yeast, EEG Biofeedback, Applied Kinesiology, also known as Neural Organization Technique, and Optometric Vision Training, to name a few. Often, excessive claims are made about these treatments, citing a few favorable responses or studies that don't hold up to scrutiny.

WHERE TO FIND HELP
An accurate diagnosis and appropriate treatment are essential. Finding a qualified provider isn't always easy because adult ADD, particularly as it affects women, isn't always recognized. Before seeking a diagnosis, read some recommended books for a better understanding of the disorder and the diagnosis and treatment process. Also, compile a list of questions to ask your provider to ensure he has a clear understanding of the disorder and appropriate treatments. If you don't feel comfortable with a physician's responses, seek help elsewhere.

Some of the symptoms commonly seen in women, partially taken from Attention Deficit Disorder in Adults by Dr. Lynn Weiss, are as follows: