Why CoolSculpting® Is the Next Best Thing 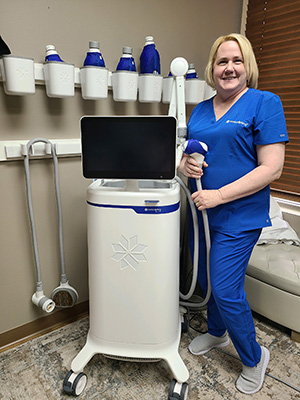 Do you hate your “muffin top?”  How about love handles—that aren’t so lovely? Or maybe it’s that outer thigh fat that causes you to avoid wearing yoga pants. Many people struggle with stubborn pockets of fat that simply won’t go away—no matter how much they diet or exercise. CoolSculpting is an up-and-coming, non-surgical procedure to reduce fat cells, and is now available in Bloomington-Normal.

What is CoolSculpting?
It is a non-invasive body contouring method. According to the CoolSculpting website, this technology was founded at Harvard University in 1999. Two scientists worked together to form a safe way to deliver cryolipolysis, a term meaning to cool and break down fat. Their research was driven from a study in 1970, in which dimples were noticed to form on children who frequently ate popsicles. They found that cooling temperatures destroyed fat cells permanently and translated that into a safe and effective body contouring product.

CoolSculpting started with placing a probe or handpiece directly onto the skin. It used a cooling technology to freeze and crystalize fat cells. Patients would feel a cooling or numbing sensation, but virtually pain-free. Our body naturally filters and removes waste. These frozen fat cells go through the lymphatic system and then are filtered through the liver and kidneys and flushed out of the body as waste. The procedure is non-invasive and non-surgical, which means the skin is not cut or opened in any way. It is safe, effective, and requires no recovery time.

Note that CoolSculpting targets fat cells. This is a sculpting treatment for reducing stubborn areas and pinchable fat. CoolSculpting is NOT for weight loss. It focuses on freezing actual fat cells which allows the body to slowly rid of the waste, therefore, giving skin the opportunity to change slowly in the reduction phase. Often, a large amount of weight loss can lead to concerns with saggy skin. While CoolSculpting is not associated with the skin in any way, the body reducing the dead fat cells over time allows less issue with sagging skin.

Candy Slagel, local CoolSculpting specialist and Certified Laser Technician at Serenity MedSpa reports that, “CoolSculpting freezes stubborn fat cells and rids them through one’s lymphatic system over time. The results are not immediate, but you can expect to notice the difference in 1–3 months. The number of sessions needed varies per patient and per targeted zone.”  It is FDA-approved for targeting nine areas, including:
Who Can Get CoolSculpting?
Making a complimentary consultation with Serenity MedSpa would be the first step in determining if you are a good candidate for the procedure. CoolSculpting  is an option for both male and female patients who are 18 years or older; have stubborn fat bulges in the areas listed above that have not responded to diet and exercise; and who do not have any medical condition in which CoolSculpting would be contraindicated. It is recommended that you wait until after you have had children and you should be satisfied with your weight and maintain a healthy lifestyle. If you want to lose weight, it’s best to hold off until your weight is stable and you are sure that you won’t gain it back.

Will It Stay That Way?
The answer is yes!  According to Slagel, most fat cells are acquired during adolescence. And although fat cells may expand and contract as weight changes, with CoolSculpting, the fat cells that are frozen during treatment are eliminated by our bodies permanently. Targeted areas may require more sessions than others.

People seek body contouring procedures for many reasons—but most commonly it is due to a negative body image. CoolSculpting offers a low-risk, non-invasive option with no down time that can help your clothes fit better, increase your self-confidence, and help you to look and feel your best.

Set up a no cost, no obligation consultation with Serenity MedSpa by calling their main office, 309-661-1800 located at 328 Susan Dr. Ste. 300 in Normal; or their satellite location, 309-808-0889  located within Dr. Tattini’s office at 902 N. Hershey in Bloomington. They have one of the largest  “menus” of treatments in the area including body contouring, laser hair removal, Morpheus 8, Votiva, Botox, fillers, and more. Back to Top
September 09, 2022