What Makes Us Laugh? The History of Laughter and Science Behind Its Medicinal Effects 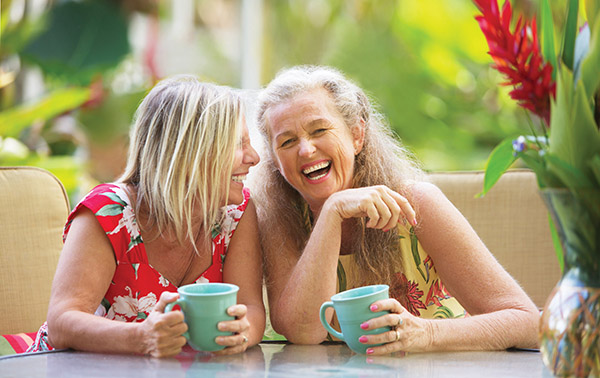 Whether you guffaw, chuckle, chortle, cackle, roar, howl, or giggle, the ability to laugh is shared by all people around the world. Humans even share this ability with apes and other primates! Charles Darwin and many other researchers have recorded observations of laughing in various primate species during play and especially when being tickled. These findings suggest the ability to laugh goes back millions of years to a shared ancestor. Tickling may not be what makes you laugh—but everyone has something that tickles their funny bone. Although the jokes people tell have shifted and developed throughout history, laughter's positive benefits are unaltered.

How Do Laughter and Humor Affect Our Health?
Laughter may really be the best medicine. Scientific research has backed up the positive effects a good laugh can have on your physical, mental, and emotional health. Laughing is so beneficial to health that laughter therapy has even become an alternative approach to treating depression, stress, and other mood disorders. Evidence from numerous studies finds laughter to be an effective method in cognitive-behavioral therapy because of its effects.

Gelotology is the term used to describe the study of laughter. This field was developed in the late 1960s and examines the physiological and psychological effects of humor. One of the founders was William F. Fry, who would watch comedic movies while drawing blood samples. The results showed that laughter increased the activity of immune system cells.

Norman Cousins was a big proponent of laughter as medicine. At the age of 50, he was struck with a disease with a low recovery rate. But he noticed that he experienced less pain and fewer symptoms when laughing. He prescribed himself regular laughter by watching Candid Camera and Marx Brothers movies and lived another 25 years. He worked with the California University Hospital to more formally study the health effects of laughter.

A physician from India, Madan Kataria, created laughter yoga which combines breathing, movement, and laughter to promote mental and physical health. A study examined the effect of this method on older adult women experiencing depression in comparison to a control group that used exercise therapy. Those who completed laughter yoga reported significantly higher life satisfaction and improvements in their depression compared to the control group. The study found laughter yoga to be as effective as exercise programs.

The Association for Applied and Therapeutic Humor is a non-profit organization started by a group of psychologists who promote the use of humor to support improved health and well-being. They have an extensive research library that shares academic research related to the benefits of humor and laughter.

Counselor and stand-up comedian, Richard Granirer, of Stand Up for Mental Health, uses stand-up comedy to educate the public about mental health and reduce the stigma around it. He also teaches those with mental health issues or disorders to utilize their struggles to create comedy, which gives them a sense of control and self-worth.

How Has Humor Changed Over Time?
Humor as a source of laughter has been around as long as humans have been able to communicate. According to Robert R. Provine, a laughter expert, "The necessary stimulus for laughter is not a joke, but another person." Laughter seems to have evolved as an essential part of social interaction, even if it does not happen face-to-face. The current thought is that humor is based on the recognition to observe or create incongruities in a social setting, and as humans’ cognitive abilities and language has developed, so has humor. Play-fighting may be one of the earliest forms of humor due to the mix of playfulness with fighting behavior.

In 2008, a group of British historians hunted down the oldest recorded joke—a fart joke in Sumeria in 1900 B.C. It was inscribed on a tablet and translates to: "Something which has never occurred since time immemorial. . ." "A young woman did not fart in her husband's lap." Although the words used may change, jokes at their core tend to make light of similar ideas—like fart jokes or toilet-related humor.

Top 10 oldest jokes from history, discovered by researchers led by humor expert Dr. Paul McDonald, reinforce the idea that at their heart, jokes have not changed too much over time. Humor has always dealt with "taboos," witty retorts, pointing out ironies, making light of difficulties, or come at someone's expense. The format of jokes may change, and the details may shift to reflect the times, but the basic elements remain the same.

Throughout history, humor has developed to reflect the times as people used laughter to connect. What people find funny varies based on individual and shared experiences. Humor generally reflects current events and stages of life and can be a way to relate to others. Shared humor relies on shared context and understanding of content. So people may not be able to appreciate jokes that have a more specific connection to a particular group. Some types of humor may be more global and relate to the basic human experience. In contrast, others have a more narrow audience that can appreciate them.

Jokes and humorous content have also been shared in a variety of different ways, depending on the technology available. Humor can be shared in any way that people communicate. Jokes have been shared through every medium imaginable—carved on tablets, written in newspapers, sent in letters, graffitied on walls, or told by entertainers like court jesters and stand-up comedians. The rise of technology has also led to alternative ways of sharing humor. In the 1950s, Charley Douglass, a sound engineer for CBS, created laugh tracks to make a shared experience of laughter for people watching at home. Today, humor can be shared far and wide through the internet and social media in the form of memes or videos.

Humor and laughter are universal and vital parts of a happy and healthy life. Keep your spirits up by finding ways to keep laughing. Though each person's sense of humor may be a little different, you just have to seek out what you find funny or enjoyable. Especially when you are feeling down, it is even more important to try to find something to laugh at to lighten your load. Socialize with people who make you laugh for a boost. Sign up for a daily joke or comic strip. Follow your favorite comedian. Keep a running list of books, songs, tv shows, or movies that make you laugh. Or start a 'funny file' for emergencies with cards and pictures that bring a smile to your face. Even if you don't feel like laughing, try forcing a few chuckles—the more ridiculous, the better. You'll likely find yourself genuinely laughing before you know it! Back to Top
July 05, 2021
Categories:  Feature