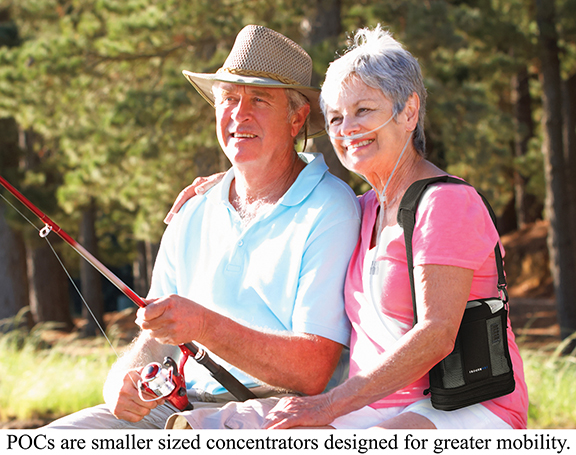 For the over 2.5 million people that require supplemental oxygen, being tethered to a large, heavy oxygen tank can be life altering. Seniors, in particular, can become increasingly homebound due to the extra effort, planning, and even physical strength required to leave the home with a tank. When this happens, they lose more than their mobility, but also their quality of life.

For seniors, any loss in mobility can lead to increasing disconnection from friends and family. Feelings of isolation and separation can emerge. Although the physical need for supplemental oxygen is being met, their social life suffers and can even impact their overall outlook on life. It can be a dwindling spiral.

This is an important issue for seniors in particular because the risk of respiratory diseases increases with age. Take Chronic Obstructive Pulmonary Disease (COPD), for example. According to the Centers for Disease Control and Prevention, the highest rates of COPD, a chronic inflammatory lung disease that causes obstructed airflow from the lungs, are found in men and women over the age of 55.
Seniors on oxygen therapy require a supplemental supply of concentrated oxygen. For decades, the standard has been to prescribe large, refillable compressed gas oxygen tanks.

However, these metal tanks can weigh up to 18 pounds. They also require regular refilling, so users must ensure they have enough tanks on hand, schedule pick-ups of replacements, and carefully plan how far they travel.

Even simple activities, like taking a dog for a walk or visiting nearby friends, require extra effort with an oxygen tank. Traveling on a plane with an oxygen tank is not permitted by the FAA either, which can be a significant barrier to staying connected with family and friends.
According to Sharon Hehn, who has a mild case of COPD and lives near Cincinnati, Ohio, the oxygen tanks provided through Social Security impacted her mobility significantly.

“I mentally boxed myself into my home, and the walls felt like they were beginning to close in on me,” says Hehn.
Fortunately, there are alternatives to large, traditional compressed gas oxygen tanks.

Another alternative are oxygen concentrators that separate the oxygen out of the air and store it, eliminating the need for refills. Portable Oxygen Concentrators, or POCs, are smaller-sized concentrators designed for greater mobility. The POC converts air into concentrated oxygen by removing nitrogen using a special filter.

As compared to the traditional compressed gas oxygen tanks, POCs are much smaller and lighter and operate more quietly. Units available on the market today, such as the Inogen One G4, weigh less than three pounds and can be worn over the shoulder, as a hip bag or as a backpack.

Founded in 2001, Inogen was founded by Alison Bauerlein, Brenton Taylor, and Byron Myers to improve the life of Mae, Alison’s grandmother, and the millions of individuals like her using supplemental oxygen therapy. The award-winning concept was conceived as a project at the University of California at Santa Barbara (UCSB) by the three while attending business school together.

As with all POCs, units like the One G4 require AC or DC power to operate. The rechargeable batteries typically last for several hours. Double-battery units are available, as are portable DC chargers for cars.

Although there are POCs that provide a continuous supply of oxygen, the One G4 uses a pulse dose delivery method. With this approach, a small burst of oxygen is delivered every time the user inhales, matching the breathing pattern. The benefit is less oxygen is wasted.
According to Hehn, she has been on oxygen therapy for 14 months since her doctor first prescribed the treatment to address her COPD, which resulted from long-term sleep apnea.

Dissatisfied with the compromises to her mobility and quality of life that resulted from using oxygen tanks, Sharon researched oxygen therapy solutions online where she learned about POCs. Having compared options, she selected and received a prescription from her doctor for the One G4 from Inogen. Her husband ordered it for her and surprised her with it as an “early Christmas gift” with the promise of bringing life back to normal again.

After seven months using a traditional oxygen tank, the switch to a POC had a noticeable impact on Hehn’s quality of life.
She refers to her POC as having “grab it and go” portability. She has returned to walking her dog every day and enjoys visits to a local farm each weekend with her husband. The POC unit has restored a sense of normalcy by allowing her to get back to many activities she enjoys.
Unlike tanks, which are not allowed on planes, POCs can be used as long as the model is FAA and TSA approved and can fit under a seat or in an overhead compartment.3  For Sharon, who is retired from over 34 years in the airline industry, this means she can more regularly visit her son’s family and four grandchildren who live in another state.

With enhanced mobility, a senior on oxygen therapy can have a more positive mental attitude. For Hehn, this has been the biggest advantage of using her Inogen POC since she cut what she describes as “an umbilical cord” with her oxygen tank. As she puts it, “I can do anything I want to do now. My wings are back.”

More information on portable oxygen concentrators can be found at www.inogen.com. Back to Top
December 08, 2018