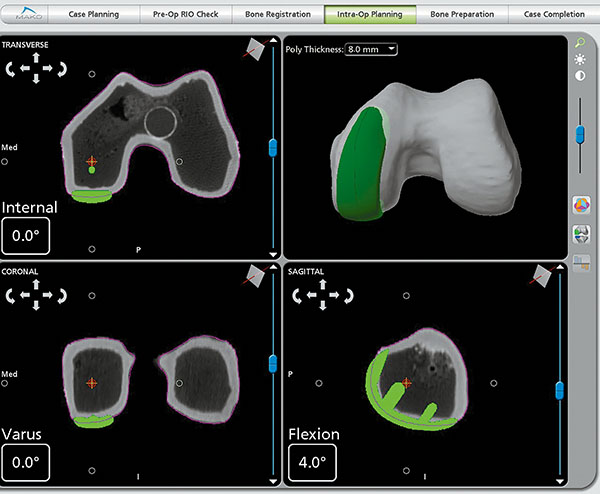 Any time two parts of a machine move against each other, wear is inevitable. It is why engines are filled with oil, why bike chains are greased, and why our joints have cartilage. Each exists in its respective system in order to reduce that wear.

But just as oil and grease eventually need to be changed from use and contamination, the cartilage in our joints wears down over the years. The resulting pain, stiffness, and loss of flexibility are symptoms of an extremely common condition known as osteoarthritis.

While osteoarthritis of the knee is particularly prevalent, unicompartmental knee arthroplasty—more commonly known as partial knee replacement—is an orthopedic procedure meant to restore use of the knee and reduce pain.

“The process of performing a partial knee is less invasive than a total in that we only replace one of the three parts of the knee joint,” explains Dr. Jeffrey W. Akeson, orthopedic surgeon at the Midwest Orthopaedic Hospital at UnityPoint Health – Proctor in Peoria.

In his more than 30 years as a surgeon, Dr. Akeson has performed over 1500 partial knee replacements, so when a new tool became available to help him in his work, he was one of the first in Central Illinois to jump at the opportunity.

The Mako Robotic-Arm Assisted Surgery System is exactly what its name suggests. It is a robotic system meant to aid the surgeon as he or she performs the actual procedure. Utilizing a computerized tomography scan from which it constructs a 3D model of the joint, the Mako assists surgeons like Dr. Akeson even before the actual surgery is performed.

“[During surgery,] the Mako, in conjunction with its computerized navigation system, allows for fine tuning the fit of the implants for each individual patient,” Dr. Akeson says. These intra-operative measurements of the different parts of the joint lead to improved accuracy of actual placement of the implant.

Of course a more accurate, fine tuned surgical experience for the surgeon pays dividends for the patient as well. “The Mako allows for a somewhat less invasive procedure. This will make rehabilitation easier and improve the end result,” Dr. Akeson points out. “Partial knee replacements, done correctly and with the appropriate indications, result in a more normal feeling knee for the patient.”

Again, the Mako System is still an instrument used by the surgeon; it is not the surgeon itself. And whether it is used for partial or total knee replacements, Dr. Akeson says the role of the Mako and the role of the surgeon remain the same. “The use of the Mako is similar in terms of adjusting our surgical plan to best fit the individual patient,” he states. “The surgeon still needs to have hands on the saw and burr when preparing the bones.”

Whether one is a surgeon or a patient, having the Mako Robotic-Arm Assisted Surgery System in the operating room has already shown considerable benefits in regard to surgical accuracy, surgeon-satisfaction, and patient recovery and rehabilitation.

Currently, Midwest Orthopaedic Hospital at UnityPoint Health – Proctor is the only hospital in Peoria using the Mako system; but certainly as the Mako continues to be utilized by skilled hands there and across the country, it will continue to prove there is a distinct advantage to human surgeons working alongside surgical machines.

Midwest Orthopaedic Hospital at UnityPoint Health – Proctor is the only hospital in Peoria using the Mako Robotic-Arm Assisted Surgery System. It is conveniently located off North Knoxville and Sheridan Road in the heart of Peoria. To make an appointment, call (309) 691-1400 or visit www.midwest-ortho.com. Back to Top
January 06, 2021