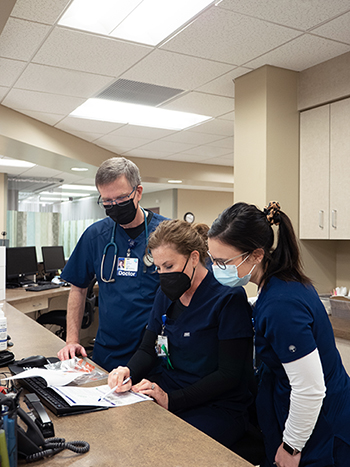 John Abraham: Routine Exam Made All the Difference

What if you could peer into the future and see chart the trajectory of your health? It may sound farfetched, but the reality is modern medicine can pinpoint problem areas and prevent small problems from growing into major, life-threatening problems. In gastroenterology, scheduling a routine colonoscopy can have a drastic effect on a patient’s prognosis—in fact, 90 percent of colon cancer deaths can be prevented by undergoing a colonoscopy.

“I’m adamant about staying on schedule with my screenings,” John said. “That’s just part of my health regime. It’s really important and I know the benefits of staying in my routine.” John scheduled a colonoscopy with Central Illinois Endoscopy Center.

During this procedure, the patient is sedated while a doctor examines the patient’s colon lining using a small, high-definition camera attached to a thin, flexible tube. During a screening, doctors can look for polyps and other abnormalities, which can often be removed during the colonoscopy. With sedation, patients are unaware of anything happening during the procedure, which usually lasts about 30 minutes. In fact, a colonoscopy is the only test that examines the entire colon and can remove polyps.

Before a colonoscopy, patients at Central Illinois Endoscopy Center prep by using the SUTAB® tablets, a series of 12 tablets taken with water and followed by drinking more water beginning at 6pm the night before the procedure. The process continues at 6am the morning of the procedure. A more traditional, liquid prep option is also available. A colonoscopy provides the patient with knowledge of whether cancerous or precancerous conditions are present. Not only does a colonoscopy find the problem—in many cases, it can also treat the problem. Though many patients may feel anxious about the procedure beforehand, patients are commonly surprised to discover a colonoscopy is not difficult or painful. During a procedure, patients can expect to be at Central Illinois Endoscopy Center for about 1 hour, 45 minutes, a shorter period than patients would experience going to the hospital for the same procedure.

Doctors recommend patients schedule a colonoscopy every 10 years starting at age 50. Scheduling a colonoscopy is extremely important for patients over the age of 50, as well as patients with a family history of colorectal disease. In 2020, John found out firsthand just how important his routine screenings are. After undergoing a colonoscopy on May 22nd, John woke up from anesthesia expecting to hear great news—just as he’d always heard. Instead, the nurse, Susan Krumholz, told John they would get John’s brother-in-law—who drove him to the appointment—and bring him in. Sitting down with Dr. Terry Baldwin, MD, John learned he had an 8-centimeter polyp in his colon that was unable to be removed during the procedure.

“That was kind of a journey. I’m fortunate that with COVID-19, it was still only six weeks from the time I had my colonoscopy until the surgery was completed,” John said. After surgery, John said he met with Steven S. Tsoraides, MD, FACS, FASCRS on July 2nd to review the final pathology report. John said the results came back with good results with clear margins—there was no cancer in the lymph nodes.

“My daughter came with me because she knew how nervous I was. Dr. Tsoraides swung the door open and said, ‘No cancer,’” John said. “We both had tears in our eyes. We were really fortunate—so blessed because I know a lot of people had a much different outcome than I did. John said Dr. Tsoraides explained the size of the polyp meant it had roughly an 85–90 percent chance of containing cancer cells. Thankfully, John fell into the 10–15 percent.

“I’m so lucky, so blessed, and so appreciative of the great care I got not only from Central Illinois Endoscopy Center—Dr. Baldwin and Susan Krumholz—but also the Peoria Surgical team,” John said. “They were absolutely wonderful.”

Because of his experience, John said he’s passionate about using his platform and encouraging others to schedule regular screenings. Because early detection saved his life, it can save many others. “People know me in Central Illinois because I’ve probably done your mortgage before,” John said. “Or people know me in the fitness community from my passion for drug-free bodybuilding. But I want to use my voice now to help educate people on the importance of regular screening, staying on schedule, and how it does save lives. My outcome could have been very, very different.”

In addition, Central Illinois Endoscopy Center has been recognized by the American Society for Gastrointestinal Endoscopy (ASGE), a leading gastrointestinal medical society, as part of its program specifically dedicated to promoting quality in endoscopy. The Central Illinois Endoscopy Center team is comprised of physicians, nurses, and administrators dedicated to providing compassionate, high-quality care in a state-of-the-art, outpatient setting.

To schedule your screening colonoscopy, you do not need a physician referral. Call 309.495.1122 or visit ciendoscopy.com/contact and request an appointment. After your screening date is set, a nurse will follow up with you to gather more health information and to go over the prep options and instructions that will also be sent by mail. Back to Top
February 05, 2022
Categories:  Feature