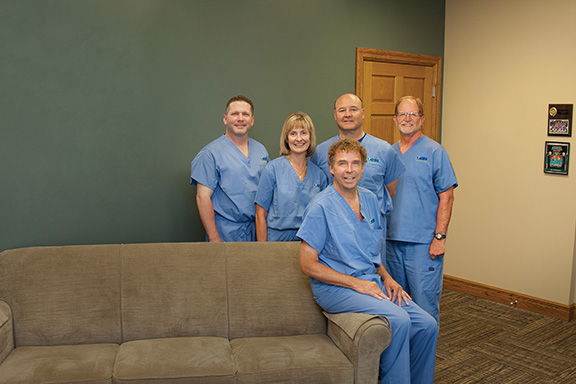 Mention “varicose veins” to anyone over a certain age and the response you get will often have a tone of resignation, as if the condition is inevitable or untreatable — or at least, not easily treated. A lot of people think that the unsightly bulges and discoloration are cosmetic issues, even though they are often accompanied by itching, burning, and cramping. They also may feel that doing anything about them involves a terrible-sounding process called stripping and isn’t worth the hassle to just have “pretty” legs.

They would be wrong on almost all counts.

These physicians and their staff often find that they must first educate the public and their patients regarding the truth about varicose veins. It is not simply a cosmetic reality of age, gender, and genetics, although those do have a role to play. Instead, they enlighten people about the true medical issues associated with varicose veins.

“The truth is, it’s a medical issue that progressively gets worse over time,” says Dr. Castillo. The breakdown of the valves in the veins doesn’t allow the blood to be pushed back to the heart against gravity, causing the blood to pool in the veins, which results in the bulging and distention of the large veins in the legs, as well as swelling in the legs, feet, and ankles. “When untreated, this can lead to severe stasis dermatitis, which can then become ulcers that won’t heal simply because of the restricted blood flow.”

Additionally, the blood pooling in the legs can cause legs to feel heavy, achy, and tingly, which may cause people to simply stop doing the things in life that they truly enjoyed doing. Often patients will come in and be somewhat desperate because their quality of life has changed so drastically — “they’ve stopped dancing or shopping because their legs hurt, or even sleeping with their spouse because of restless legs syndrome,” explains Dr. Bohn.

The good news is varicose veins — the medical condition — can be treated in such a way that there is little risk to the patient, little lifestyle impact as far as restrictions during or after treatment, and with little pain throughout treatment. “There are lots of benefits,” says Dr. Castillo of the treatment options The Vein Specialists offer. Better health and quality of life for the patient are the main reasons and, yes, the cosmetic benefit is a definite plus as well.

“These treatments can be game changers for patients who have quit doing things because their legs hurt or they just didn’t like the way their legs looked,” says Dr. Bohn. Their overall health and quality of life improves, and they can become more active because it’s easier to move again.

Seeking treatment
Women, by a three-to-one margin, deal with varicose veins more often than men, but that’s not to say men don’t have varicose veins or that they aren’t just as serious or affect quality of life any less for men. “I would say men tend to wait longer to seek treatment,” says Dr. Nielsen. “I’ve had several guys come in because their golf buddies told them they were tired of looking at their veins. But, men typically don’t care as much as women about what their legs look like. When men come in, their pain is at a higher level.”

Women in general seem to be more attuned to their own healthcare, and they are definitely more conscious of how their legs look — whether it’s their own recognition or comments from others. “Some patients have also said they decided to come in after their grandchildren touched the veins on their legs and the touch was either painful or the child asked questions. One patient told me their granddaughter said, ‘What are those purple worms?’”

“Others have said people asked about the ‘bruises’ on their legs when they were swimming or wearing shorts — and the ‘bruises’ were actually spider veins or discolored skin due to the varicose veins,” adds Dr. Bohn.

Even though some people may seek treatment for cosmetic reasons, they quickly find out there is a medical issue going on. The good part about that is, along with having better looking legs, the treatment takes care of issues they didn’t realize they were having. “I’ll ask a patient during a consult if they have ‘heavy legs,’ and they’ll say ‘no.’ But after they’ve had the procedure, they’ll feel a definite change and say, ‘Remember when I said I didn’t have heavy legs? I was wrong — because now they feel much lighter!’” says Dr. Nielsen.

Ed Young, a hair stylist from Farmer City, definitely had “heavy legs” due to varicose veins. “Back in 2000, I had the surgery where they stripped the veins in my legs to get rid of the varicose veins. I stand on my feet all day doing hair, and my legs were so painful I would have had to quit,” he says. That surgery “hurt a lot,” he remembers, and he had 60 stitches and 60 clamps in his legs that had to heal before he could return to work.

Unfortunately, almost 20 years later, he had trouble with his legs again (a not uncommon occurrence after vein stripping surgery), but he certainly did not want to go through the same thing again. His physician recommended that he see The Vein Specialists, where he talked with Dr. Castillo. His treatment plan this time included endovenous laser ablation (EVLA), which uses an ultrasound-guided laser to deliver laser energy to the inside of the vein, causing the vein to collapse and seal shut.

Ed went into the Vein Specialists office five or six times from October to February for treatment. “Each appointment lasted no longer than an hour, and after I was done, I could do anything I wanted. There was no pain and no recovery time.” Ed hardly felt the small incision they made to insert the laser. “I’ve never had trouble since,” he adds. “And, I’ve got really good-looking legs now!”

“Anyone who has vein trouble, I would send them there in a heartbeat!”

The process
Patients will be seen for an initial office visit. The physicians will review your symptoms, examine you and your legs, and perform a diagnostic ultrasound (sonogram). An individualized treatment plan will be developed based on the patient’s specific needs.

A typical treatment process includes two laser treatments and four sclerotherapy treatments over the course of four to six months.
It is not an overnight fix, as the veins must have time to heal between treatments. “I always tell people their varicose veins took time to develop, so they’ll take a little while to treat,” says Dr. Castillo.

The laser portion of the treatment (endovenous laser ablation) involves using a local anesthetic and saline solution to numb the vein and the surrounding tissue. A small incision is made through which the laser is inserted. An ultrasound picture enables the physician to see exactly where the laser energy needs to be targeted. The laser energy targets the water in the wall of the vein creating steam which creates scar, closing the vein. The body reabsorbs the scar tissue over the next year.

Three to four weeks later, patients often undergo sclerotherapy treatment. This treatment uses medication that is injected into the remaining tributaries of the vein. The medication scars the inner lining of the vein, leading to collapse of the vein, which is eventually reabsorbed by the body.

But, will it hurt?
Both the endovenous laser ablation and sclerotherapy treatments are minimally invasive procedures, which cause less trauma to the surrounding tissue and require much less time to heal. Pain tolerance is a very abstract and subjective thing — what might be mild pain for one person is hardly noticed by another. Still, the fear of pain can keep people from doing a multitude of activities, even activities that will benefit them in the long run.

Of course, that actual pain a person feels depends on that person’s nerve fibers — some people have more, and some areas of the body have more. A question often posed is whether the procedures will hurt. “I always tell people it’s not intended to be painless,” says Dr. Nielsen. “But most people say it is uncomfortable.”

The Vein Specialists have a really good resource for patients who need to talk about pain. One of their own staff members, Kim, has undergone both the EVLA and sclerotherapy procedures. “My previous job involved a lot of standing, so when my legs ached, I thought it was just due to my job — it was normal,” she says.

She had a small vein on her leg that a friend noticed — so her primary reason for coming in to see Dr. Nielsen was cosmetic, not due to her aching legs. “I noticed after the procedure that several symptoms, like the achiness in my legs, were gone. I hadn’t even realized they had been caused by vein issues!”

Kim had such a good experience that she ended up joining the staff at The Vein Specialists. When a patient is concerned about the pain, they can call Kim in. “I can definitely relate to the patients. I’m honest about what it feels like — there’s a little pain, but it’s not horrible. For most people, it’s the fear of the unknown more than anything.”

For people suffering from the effects of varicose veins — aching, cramping, heaviness, swelling, wounds that won’t heal, unsightly bulges — the pain of what they go through every day is probably greater than what they will feel during the treatment.

The Vein Specialists keep a “brag book” in their lobby that is full of thank you cards and notes from patients they’ve treated. Chances are high that every one of them would say any pain they felt during treatment was totally worth it.

Why? Because the end result is not only better-looking legs, but a healthier, more active you.

Contact The Vein Specialists at 309-862-4000 or www.ILveins.com for more information or to schedule a consultation.