The Responsibility of Caregivers Runs Deep 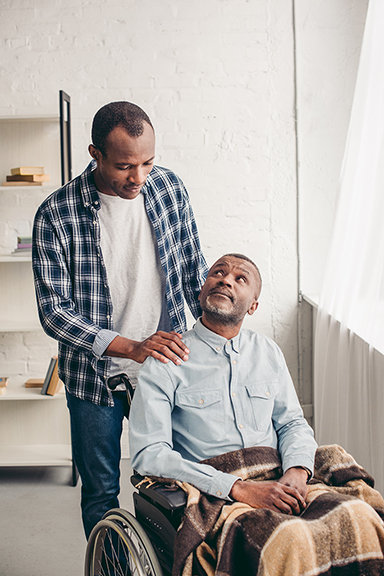 One constant that we, as humans, can be assured of is change. Change is inevitable, and we know it, and yet, instead of embracing change, it is often our human nature to fight against it, push it away, or ignore it in hopes that change will move on to another. Why is this? One of the most commonly cited reasons is that change — even some of life’s positive changes — can feel stressful and overwhelming. We tend to find comfort in our seemingly stable or secure environment, even when that environment may limit our day-to-day activities, interaction with others, or our general wellbeing and quality of life. This is especially true for older adults or their families who are contending with decisions that may involve a life-impacting change in the living environment.

A recent phone call was received from an adult son, sharing that his parents live in the Quad Cities area, and even though he lives a couple hours away, he is one of the closest and most involved of the children. Due to concerns over his father’s health, they were considering various options, such as home health care, independent living, and assisted living.

Here is the interesting part, though not at all uncommon, is that it became obvious shortly into the conversation that he was not really calling for his father at all. Sure, we discussed care needs (first and foremost), finances, location, goals, etc., in regard to helping him with his father. However, once we were able to delve a little deeper into the son’s motivations it became clear, and he even admitted, that his main reason for contacting us was for his mom, the person who had been dad’s primary caregiver up to that point. She had always been in good health and up to the task. Yet, the son could see that it was beginning to take its toll and that it was likely to only get worse.

Many of the themes surrounding caregiver stress and change clearly resonate with the working adult children and caregivers who have had some experience caring for an elderly loved one, None more so than discussions of caregiver stress. We all know from experience the strain of caregiving. Studies also seem to support what we suspect intuitively. Experts, for example, note the emotional burden carried by caregivers. Besides stress, they are likely to feel isolated, burned out, and have an overall sense of being overwhelmed. According to the Family Caregiver Alliance, between 40 and 70 percent of caregivers are stressed enough to show symptoms of clinical depression.

All of this obviously takes a physical toll as well. The Shriver Report, a study conducted by Maria Shriver and the Alzheimer’s Association, estimated that “caregivers’ own health care costs an additional $4 billion dollars a year due to the emotional and physical stress and strain of caregiving.” Billion with a “b,” as the saying goes. That is a lot.

In the example cited above, this is where the wife was finding herself. Moreover, this is where the son was starting to find himself. As his mom needed to give up the role of caregiver, the son tried to fill the void — not easy to do from out of town and being a working professional who has burned up through all his vacation days through this process.

LivWell Seniors’ Senior Resource Specialists serve as personal and professional advocates who work closely with the family to navigate the broad network of senior living solutions. Members of the LivWell Seniors team live, work, and volunteer, serving the Iowa City/Cedar Rapids, Quad Cities, and Des Moines areas. It is their promise to provide families with compassionate and professional services. We can be reached at www.livwellseniors.com or 563-265-1577. Back to Top
June 05, 2019