Superhuman: Life at the Extremes of Our Capacity 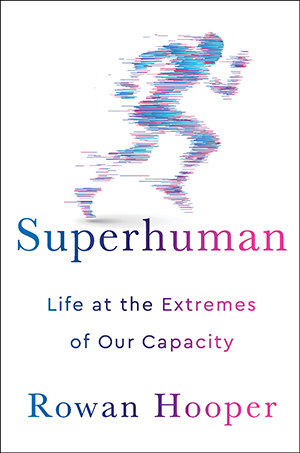 You must think you’re something special.

And you’re right – you are. You’re one in a million, unique and talented, and possessing skills beyond what’s normal. Yep, you’re something special alright, but in the new book Superhuman by Rowan Hooper, there are things you can do to be better.

At a conference for primatologists a few years back, Rowan Hooper was feeling smug in his view that humans and animals weren’t that far apart, that “there was nothing unique about us humans” — until one of his fellow scientists put him in his place with a question that changed Hooper’s perspective.

We are unique among animals, but, as he discovered, some of us are even more so.

Take, for instance, intelligence: our brains are efficient machines that are driven partly by genetics but, unlike animals, we can do certain things to become experts. Smart people are daydreamers, and they tend to have laser-like curiosity; it helps that many are born with “innate talent” that “tilts” to enhance expertise.

Certain among us “have a condition called highly superior autobiographical memory, or HSAM,” and can recall minute details of specific days of their lives. That “gift” (or curse, depending on who you ask) helps scientists learn how memories are stored. Yes, there are ways to boost your ability to remember.

Hooper spent time with hyperpolyglots, people who fluently speak dozens of different languages, and he learned how that ability can alter personality. He also spoke with people who have, since childhood, possessed extraordinary focus; and he learned how anyone can gain better “sustained attention.”

He learned about bravery, and how motherhood hormonally changes a woman’s level of it. Hooper discovered what to do to encourage a child’s emerging talent, why running can be Zen-like, what sleep (and its lack) does to our brains, how resilience and happiness come from unlikely places, and why you should go ahead and eat that piece of chocolate cake: “unless you’ve got the genes, you just ain’t gonna be a centenarian.”

That shouldn’t make you sad. Says author Rowan Hooper, “Don’t beat yourself up if you don’t reach the level of the people in this book” because it rarely happens. Even so, with Superhuman, you can give yourself a strategic boost.

In the meantime, and while you’re picking up pointers, let yourself be highly entertained by Hooper’s not-always-distanced curiosity about human capability; indeed, he often uses his personal thoughts to tie together the surprising things he brings to readers who can’t help but share in his contagious delight. Is it any surprise that this circles back to the section on teamwork?

It shouldn’t, just as it should come as no surprise that this book is based in genetics and neurology, but don’t freeze: it’s super-easy to understand, even for the non-scientific-minded reader. That should absolutely help, if you’re curious about curiosity, fearful that understanding fear might be difficult, or you want to enhance your memory, happiness, health, focus, smarts, or speed.
If that’s your goal, then Superhuman could really be something special.