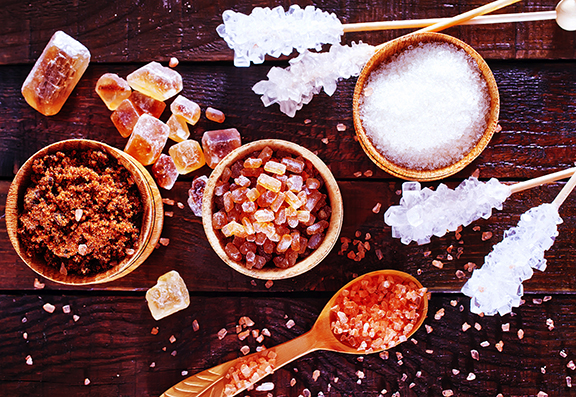 How did we ever get to a place where there are so many types of sweeteners on the market that there might be genuine confusion? Just 100 years ago, there was only cane sugar, sorghum, honey, and maple syrup, and Americans each ate less than two pounds a year of them, total.

Today, Americans each eat the equivalent of 22 teaspoons of sugar a day, adding up to over 70 pounds of sugar per person, per year. According to Rachel K. Johnson, lead author of a paper published in the American Heart Association (AHA) journal Circulation, too much sugar not only makes Americans fat, but also is a key culprit in diabetes, high blood pressure, heart disease, and stroke.

Sugar raises blood glucose, triggers abnormal insulin surges, and makes us hungry and fat. It also reduces HDL cholesterol (the “good” kind), skyrockets triglycerides, and contributes greatly to inflammation in the body. Some scientists even think that sugar is a slow-acting poison.

The Heart Association report recommends that most women consume no more than 6 teaspoons a day, (24 grams) of added sugar and for men, the recommended limit is 9 teaspoons, or 36 grams. This means that one 6-ounce cup of store-bought, flavored yogurt, with 40 grams (about 10 teaspoons) of sugar, would put you over your sugar limit for the whole day!

Worldwide consumption of sugar has tripled during the past 50 years, and commensurate with it, the incidence of obesity and chronic disease has become epidemic. In fact, sugar has recently been found to be so toxic to the body that some scientists have argued for its regulation, like alcohol or tobacco.

This summary of sweeteners comes with a warning: Added sugar in any form is not good for you, so please use it sparingly.

Sucrose, like all complex sugars, breaks down during digestion into two simple sugars: glucose and fructose. Glucose is transported by insulin to the cells for energy, which, unless burned, gets stored away as fat. Yep, you read that right: Sugar, unused, makes you fat.
Glucose is the foundation for the Glycemic Index (GI), which ranks foods on how they affect our blood glucose levels. This index measures how much your blood glucose increases in the two or three hours after eating certain foods. Table sugar, or sucrose, has a GI of 60. Eating low (below 50) on the glycemic index can help you control your blood sugar naturally. In addition to glucose, complex sugars like sucrose or lactose also break down into fructose.

Refined white sugar (table sugar) is 50% glucose and 50% fructose, and is highly processed using multiple fossil fuel and chemical-intensive processes. It provides empty calories and zero nutritional value. Additionally, the fact that over 65 percent of commercial sugar is made from genetically engineered (GMO) sugar beets makes white sugar something to be avoided at all costs.

Fructose does not raise blood glucose levels immediately the way glucose does, and is therefore considered low on the glycemic index. But don’t be fooled into thinking that’s a good thing. Fructose travels to the liver where it gets converted to triglycerides—the fats in the blood that are associated with heart disease. Like excess blood glucose, blood triglycerides made from fructose are stored as fat, which increases the size of your fat cells, contributing to weight gain and obesity.

The excess triglycerides created when you eat fructose increase insulin resistance, thereby boosting insulin production to very high levels, which fosters the development of diabetes in a “back door” fashion.

Sugar Extracts
Cane Juice is the common name for the sugar produced directly from milled cane using a single-crystallization process. The filtered, clarified juice is simply heated to remove water and then allowed to cool, forming granular crystals.

Date sugar can also be made with the fruit of the palm by pulverizing very dry dates, but sugar made this way will not dissolve well in liquid and processing leaves much of the flavor of the sugar intact, creating an almost molasses-like flavor.

Demerara sugar is a light brown raw sugar with large golden crystals, which are slightly sticky from the adhering molasses. It is often used in tea, coffee, or on top of hot cereals.

Turbinado sugar is raw sugar that has been partially processed, where only the surface molasses has been washed off. It has a blond color and mild brown sugar flavor, and is often used in tea and other beverages.

Muscovado sugar, a British specialty brown sugar, is very dark brown and has a particularly strong molasses flavor. The minimally processed crystals are slightly coarser and stickier in texture than “regular” brown sugar.

Palm sugar is a traditional sweetener that has been used for thousands of years. Because it comes from tapping trees that require little water and help build agroforest ecosystems, it is also the most sustainably produced granulated sugar in the world. Originally made from the sugary sap of the Palmyra palm, as well as the date palm or Sugar date palm, now it is also made from the sap of the sago and coconut palms and may be sold as “coconut sugar.”

Rapadura or panela—often still has the minerals and enzymes intact because, they have not had all of the molasses chemically and physically removed. Common brown sugar is a highly refined pseudo-food best replaced by one of the naturally brown sugars below.

Liquid/Modified Sugars
In the 1970s, Japanese scientists discovered a process that could convert cornstarch into an alternative sweetener called high fructose corn syrup.

High fructose corn syrup contains 55 percent fructose and 45 percent glucose, which makes it virtually as sweet as sucrose or natural honey. Today, high fructose corn syrup has replaced pure sugar as the main sweetener in most carbonated beverages and is hiding in products like salad dressing, spaghetti sauce, and whole wheat bread. It is often one of the first ingredients in cake mixes, cookies, sauces, breakfast cereals, and commercial baked goods.

Rice Syrup is a natural sweetener that is made from cooked brown rice, which is specially fermented to turn the starches in the rice into sugars. Since rice syrup will cause an elevation in blood sugar, it is not suitable for diabetics, and individuals with gluten intolerance should read rice syrup labels carefully.

Natural Sweeteners
Coconut Nectar is simply coconut palm sugar that hasn’t had the water completely evaporated out of it. It is syrup you can use like any other sugar syrup, though it is slightly less sweet.

Honey is a mixture of sugars and other compounds, mainly fructose and glucose. The specific composition of any batch of honey depends on the flowers available to the bees that produced the honey.

Raw honey is honey as it exists in the beehive or as obtained by extraction, settling, or straining without adding heat (although some honey that has been “minimally processed” is often labeled as raw honey).

Lo Han Guo—also called Monkfruit—is the fruit of the Momordica grosvenorii, a plant cultivated in the mountains of southern China for thousands of years. Many studies are underway which are confirming the nutritional and healing properties of Lo Han Guo.

Mogrosides extracted from the Lo Han fruit taste 300 times sweeter than sugar, but without affecting blood glucose levels, making this sweetener an excellent choice for diabetics. Lo Han Guo is available as a pure extract and as a powder that is easier to bake with than stevia, and it has no after taste.

Maple Syrup is one of the many wonders of the world, made from the sap of 40 year old sugar, black, or red maple trees. Maple syrup contains fewer calories and has a higher concentration of minerals than honey.

Molasses is a thick, brown to deep black, honey-like substance made as a byproduct of processing cane or beet sugar. The process by which it is extracted and treated with sulfur results in fortification of iron, calcium, and magnesium. It is also made up of both glucose and fructose.

Sorghum syrup use to be one of the only affordable sweeteners produced locally in the U.S. but during World War II, there was a shortage of farm labor to produce it. After the war, industrial farming and food processing techniques made sugarcane— and later, corn syrup—much cheaper to produce.

Stevia is a South American herb that has been used as a sweetener by the Guarani Indians of Paraguay for hundreds of years. The leaves of the small, green Stevia rebaudiana plant have a delicious and refreshing taste that can be 30 times sweeter than sugar, but it has no calories, and consuming it does not raise blood glucose levels at all.

Yacon Syrup is a sugar substitute native to the Andean region of South America. It is glucose-free, and does not increase blood sugar levels.

Sugar Alcohols
Sugar alcohols (which end in -ol) occur naturally in plants. Some of them are chemically or biologically extracted from plants (sorbitol from corn syrup and mannitol from seaweed), but they are mostly manufactured in a highly-intensive industrial process from sugars and starches. Because they are not completely absorbed by the body, they affect blood sugar levels less, but can ferment in the intestines, therefore not recommended for people with IBS or other digestive issues. Sugar alcohols don’t promote tooth decay so are often used to sweeten “sugar-free” chewing gum, but sugar alcohols like xylitol are highly toxic to dogs.

Swerve®
Swerve is the latest “natural sweetener” to hit the market. Swerve is made from a combination of erythritol, oligosaccharides, and natural flavors that give it excellent baking and cooking functionality. Swerve even has the ability to brown and caramelize! It is still a highly refined sweetening agent made from a sugar alcohol even though it is generally recognized as safe (GRAS) by the U.S. Food and Drug Administration (FDA).

Artificial Sweeteners
Saccharin, Aspartame, and Sucralose are completely artificial, chemical sweeteners. None of them have any calories or glycemic index, and each of them has been linked to cancer, digestive distress, and chronic illnesses in numerous studies. None of them are real food and each should be avoided at all costs.

Saccharin, most often known by the brand name Sweet ‘N Low®, is the oldest artificial sweetener. It comes in the pink packet, and is commonly used to sweeten diet soft drinks and candies or to improve the flavor of medicine and toothpaste.

Aspartame is sold under a number of different product names, including Equal® (blue packet) and NutraSweet®. It is used to sweeten diet soft drinks and candies

Sucralose, sold under the name Splenda® in the yellow packet, is an artificial sweetener that is heat stable. Splenda® is made from refined sugar which has a molecule of chlorine artificially added to it so it is not properly absorbed by the body.

The Sweet Surrender
While no sugar or sweetener is without its health risks, in moderation, minimally processed, traditional sweeteners like rapadura, palm sugar, maple syrup, sorghum, raw honey, lo han guo, or stevia leaf can be delicious additions to a healthy, real food diet.