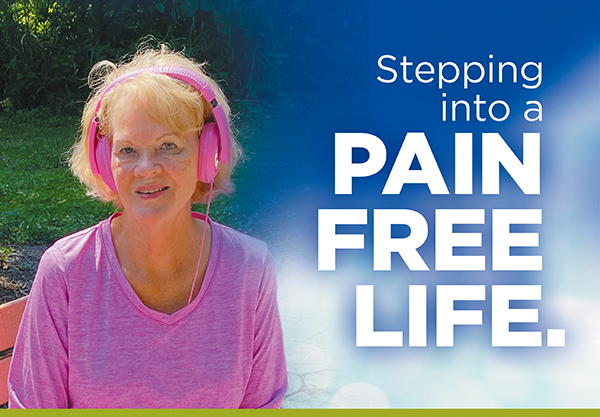 Quad Cities resident Donna Honold had never even had stitches before her recent knee replacement, which was her very first surgery ever. To say she was nervous would be an understatement.

“With it being my first surgery, I didn’t know what to expect,” Donna said. “I was apprehensive, and now I have absolutely no regrets.”

That newfound assurance stems from her trust in Dr. Robert Cagle and the team at Mississippi Valley Surgery Center (MVSC), an outpatient surgery center in Davenport, Iowa, where her procedure was performed. Dr. Cagle joined the Orthopaedic Specialists, PC team in March of this year with extensive experience in the Mako Robotic-Arm Assisted Surgery System.

One of Donna’s fears about having her procedure performed in an outpatient setting was going home the same day, and now she says she’d recommend it to anyone.

Making the Decision for Mako
Prior to her surgery, Donna’s right knee hurt her all the time. An X-ray showed bone grinding on bone. That is a common occurrence for those older than 50. The cartilage that cushions the bones wears away causing the bones to rub against one another and resulting in pain and stiffness.

After the X-ray, Donna began doing her research. She soon discovered that Mako SmartRobotics™ would be her best option at Mississippi Valley Surgery Center. At the time of her procedure, Dr. Cagle and his team were the first and only certified doctors in the Quad Cities performing SmartRobotics surgery, in which the surgeon uses a robotic arm for increased precision and in-turn, a faster recovery time.

“As soon as I heard about it (Mako), I was in,” Donna said. “Less pain? Less recovery time? Sign me up. If there’s a bigger and better way to do things, why wouldn’t you?”

On April 21, 2021, the wait was over. Donna had her total knee replacement. Dr. Cagle had performed more than 400 robotic-arm assisted surgeries prior to relocating to Iowa, but Donna’s knee replacement would mark his first surgery in the Quad Cities.

Insights at Every Step
As a performance consultant who handles management and development training, Donna appreciated the team’s eagerness and compassion. At every step along the way, she stayed informed. With it being her first surgery, this helped further calm her nerves.

Dr. Cagle provided a guide that walked through pre-surgery, day-of, and post-surgery, which Donna really appreciated. He also went over the details in their preliminary meeting and again day-of.

“He was amazing to work with,” Donna said. “I felt so comfortable having him as my surgeon. I’m a huge fan of his and a big proponent of his work. I feel like I have a partnership with him. He is the kindest and most caring. He’s also extremely attentive. He was open to any question. It never felt like I was bothering him.”

“I cannot say enough good about the Surgery Center,” Donna said. “As someone who conducts employee training, I was impressed. Each employee introduced themselves, asked for my name and birthdate, said how happy they were to be there and explained exactly what they were going to do and why.”

Donna said that everyone from the front desk to the anesthesia provider to the nurses caring for her before and after helped her feel comfortable.

“You can tell the staff is highly engaged and it’s a good work environment,” Donna said. “It felt safe, clean and secure. Somebody was with me all the time and they explained everything.”

No Place Like Home for Recovery
Another fear that Donna overcame was going home the same day of the procedure. As an outpatient facility, MVSC’s patients are able to return home the day-of surgery and recover in the comfort of their home.

Donna’s surgery took place at 8am, and by 4pm she was home.

“I’m so glad I did the day-of,” Donna said. “I was very concerned, but I would recommend that to anybody. I didn’t go home until I walked and did stairs. It felt very comfortable to be home that night.”

She also credits her husband as a “supportive caretaker, champion, and cheerleader” for her speedy recovery. Her team also included her physical therapist, who prepared her prior to her knee replacement with exercises to do before the surgery and has continued to work with her throughout her recovery.

For about a week, Donna used a walker to get around, and then she used a cane for about two and a half weeks. About three weeks after her total knee replacement, she didn’t need any device to assist with walking.

“Everyone that sees me is amazed,” Donna said. “Friends that have had total knee replacements are just shocked at my progress.”

Complete Personalization Makes a Complete Difference
Indeed one of the key benefits of the Mako System is the faster recovery time. Now Donna praises the technology, which helped her get back on her feet quickly.

“I highly recommend it,” she said. “It’s less invasive, less pain, and a faster recovery. I mean I can’t compare it with this being my only surgery, but compared to people I know who have had total knee replacements, mine went much smoother.”

Mako is an innovative solution for those suffering from painful arthritis of the knee or hip. It uses 3D CT-based planning software, so the surgeon better understands the patient’s anatomy to create a personalized joint replacement surgical plan. This 3D model is used to preplan and assist the surgeon in performing the joint replacement procedure.

During the procedure, Dr. Cagle followed the personalized surgical plan while preparing the bone for the implant. He then guided Mako’s robotic arm within the predefined area, and Mako’s AccuStop technology helped him stay within the planned boundaries that were defined when the personalized preoperative plan was created. By guiding him during surgery, Mako’s AccuStop technology allowed more precise cutting to help protect Donna’s healthy bone.

Mako SmartRobotics does not perform surgery, make decisions on its own, or move without the surgeon guiding it. The Mako System also allows the surgeon to make adjustments to the plan during surgery as needed.

Walking Into Her Next Chapter
Now Donna is counting down the days until she can see her grandsons who live in Springfield, Missouri. With the COVID-19 pandemic and then her procedure, it has been more than a year and a half since she last saw the boys, ages 8 and 10.

“That’s what’s been driving me,” Donna said. “Going to see the grandsons is what I’m most looking forward to.”