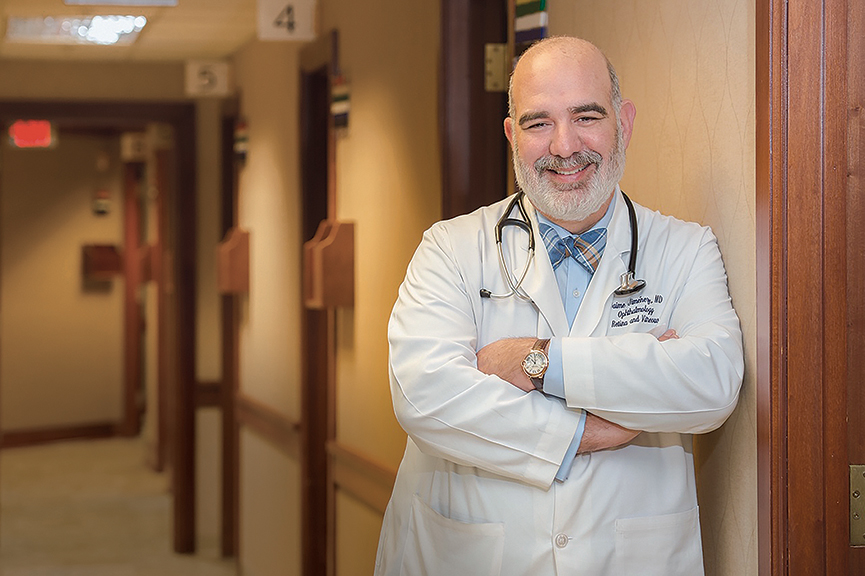 Over the course of his esteemed career, ophthalmic physician and surgeon, Dr. Jaime Jiménez has seen great technological advances in the devices used to treat numerous eye problems, especially for the removal of “floaters.”

Described as strands, dots, cobwebs, and flashes, the condition known as floaters is an opacity in the vitreous cavity, located in the back of the eye. “With age, the vitreous gel begins to shrink and clump,” said Dr. Jiménez. “That shrinkage creates the dark, moving dots that are commonly known as floaters. There are patients who don’t find the symptoms problematic, while others do. This is one reason we handle every case of floaters individually; no two patients are the same.” While most floaters are longstanding and benign, in some cases it may be a symptom of a more severe eye condition. A sudden increase in floaters requires prompt evaluation.

Floaters can be equated to looking through fog. Like fog, light glare is a common and uncomfortable problem for patients experiencing floaters. “Can you drive through fog?” asked Dr. Jiménez, “Of course you can; but, to do that every day, all day long, would take its toll.” While floaters are a common symptom of vitreous deterioration, a patient’s quality of life can be affected significantly enough to warrant treatment.

With five fellowship-trained physicians at Southern Eye Center, the ability to quickly refer patients to the appropriate in-house specialist allows for a more timely diagnosis and treatment. “The five of us have worked together for many years, with that synergy and with multiple specialties, our patients can trust we will find the best solution to an eye problem,” said Dr. Jiménez. “If we see something out of the ordinary, we bring in one of our other doctors for consultation.”

While there are varying symptoms and levels of severity for floaters, treatment can be handled onsite in a procedure or in one of Southern Eye Center’s two surgery centers, located in Hattiesburg and Laurel. There are several treatment options for floaters. The first recommendation may be observation, where the retinas are checked regularly for changes.

While surgery is reserved for more severe complications, today’s technology has vastly decreased the amount of time a patient is in surgery, allows treatment to be done outpatient, and decreases the level of discomfort experienced after. “Earlier in my career, floater removal surgery had a bad name and it was discouraged,” noted Dr. Jiménez.

“Smaller instrumentation allows for smaller incisions,” said Dr. Jiménez. “That leads to less discomfort for patients and faster recovery. Since the eighties, laser technology, light sources, and other enhancements make the removal of floaters, as well as other procedures, much more reliable with much better outcomes for patients.”

Cheryl Ladner, a patient of Southern Eye Center, credits Dr. Jiménez and Dr. Kiper Nelson for her “new and improved” vision. “I have had floaters for as long as I can remember,” said Cheryl. “The black dots ran around my eyes every day. I went to see Dr. Nelson for cataracts, but was quickly referred to Dr. Jiménez, who was just down the hall."

While concerned before her surgery, within 24 hours Cheryl knew this was one of the best decisions she’d ever made. “It is the most amazing thing. I don’t see the Curly Qs — like rotini noodles — moving around my eye,” said Cheryl. “I’d recommend it to anyone; my vision is crystal clear.”

Heavily involved in ongoing research, Dr. Jiménez is a co-author in a recently published, multi-center study. In this body of work, patients with diabetic macular edema received intra-ocular, long-acting steroid (Iluvien). The study demonstrated a beneficial effect on patients’ outcomes, as well as a long-term decreased burden for monthly injections.

Remaining abreast of the most current advances in treatment options, instrumentation technology, and procedures allows Dr. Jiménez to provide the best patient care. While not directly involved with the research and development of new devices, Dr. Jiménez is often asked to beta test and provide feedback on their design.

One of the newer treatment options for patients experiencing floaters is the YAG laser. Unlike the vitrectomy, the surgical removal of the eye’s vitreous gel, the YAG laser procedure can be done in house. “After that, many patients see tremendous improvement in their vision in a short amount of time. The laser treatment is minimally invasive,” said Dr. Jiménez.

Dr. Jiménez knew from a very young age that medicine was his calling. As a child, his mother, Minerva, a nurse, saw neighbors, relatives, and friends in their home in Puerto Rico. “In our community, I noticed how everyone respected my mother. Her care and compassion for people was so genuine. Everyone knew me as ‘Minerva’s son,’” reflected Dr. Jiménez.

In 1967, at the age of seven, Jiménez received burns to approximately 60 percent of his body while playing with a friend. “I was at my neighbor’s house, and we were burning plastic models, child’s play,” said Jiménez. During his sixth-month stay in the ICU, he recalls that his mother never left his side during the lengthy recovery. While he couldn’t leave the hospital on his own two legs, a decade later Jiménez competed in the 3,000-meter track and field event in high school in San Juan.

The bright and talented Jiménez was accepted into college at the age of 15, earning his Bachelor of Science degree with honors. After earning his medical degree from the University of Puerto Rico School of Medicine, Jiménez did his eye surgery training, and he served as the Chief Resident in the Department of Ophthalmology.

Before completing his fellowship in vitreo-retinal diseases and surgery at the Hermann Eye Center at the University of Texas in Houston, Jiménez served in the U.S. Air Force. Stationed at Keesler Air Force Base in Biloxi, Miss., he was the Assistant Chief of Ophthalmology for two years. For his work, he was awarded the Air Force commendation medal.

“After medical school and the Air Force, I’d learned so much about the eye,” said Jiménez. “But, I knew there was so much to learn about the retina. As a fellow, I was able to study under two renowned physicians, Dr. Charles A. Garcia and Dr. Michael Bloome. Under their tutelage, I was able to learn the complexities of the retina and how to best treat patients with complicated retinal issues.” Dr. Jiménez was the first full-time vitreo-retinal specialist in Southern Mississippi and has been caring for patients at Southern Eye Center for more than 25 years.

A community leader in the Pine Belt, Jiménez was actively involved in the Hattiesburg Mississippi Rotary Club from 1993 to 2005, receiving the Paul Harris Fellow Award.

A lover of music, Jiménez spends many hours enjoying orchestral music and opera. He is also a supporter of the music programs at The University of Southern Mississippi, William Carey University, Hattiesburg Concert Association, and the Hattiesburg Youth Symphony Orchestra. You can often find Dr. Jiménez singing opera, playing the guitar or piano, or enjoying live music.

For more information about the leading-edge treatments for floaters or to schedule an appointment with Dr. Jaime Jiménez, or any of the fellowship-trained physicians at Southern Eye Center, call 601-264-EYES or visit southerneyecenter.com.