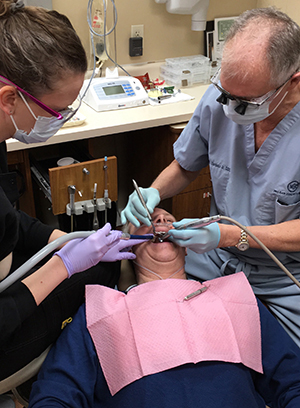 It is well known many children are afraid of going to the dentist. Also not surprising is the fact that that fear often stays with people well into adulthood. In fact, anxiety over going to the dentist is one of the most common fears people cite when asked about their phobias.

For all those people who mentally suffer before even sitting down in a dentist chair — whether it is an outright fear or just an inability to relax — sedation dentistry may be the answer.

Connie, a patient of Bloomington’s Emil Verban, Jr., DDS, has carried her fear of the dentist for a long time. “As a child, I had a lot of visits to the dentist and it was pretty scary for me,” she says. “So recently, when I was looking for a new dentist, I saw sedation dentistry and steered right toward it. I would not go back to the regular [dentistry.]”

Whether in need of a semi-annual cleaning, like Connie, or a root canal, there are various levels of sedation. Although sedation is sometimes referred to as “sleep dentistry,” that is somewhat of a misnomer. Levels of sedation cover a wide range, from a simple inhaled mix of nitrous oxide and oxygen meant to relax the patient for the procedure, to oral sedation, which is taken in pill form about an hour before getting started. There are deeper levels as well, including general anesthesia.

Sedation is also offered intravenously. That is what won over Mary, another one of Dr. Verban’s patients. “It has given me the opportunity to take care of all my dental needs, many of which I’d put off for several years due to a phobia of needles and injections,” she shares. “Now, I no longer fret over going to the dentist.”

A local anesthetic, namely lidocaine, may also be used in conjunction with some of the levels of sedation. The two may be very beneficial to those who have a low pain threshold or for patients who suffer from sensitive teeth.

Fear of the dentist or of pain may not be the only reasons to pursue sedation dentistry. For some, a bad gag reflex is a simple enough reason for it. For anyone who needs a great deal of dental work done, simply sitting still in the dentist’s chair can be a challenge. Sedation can help that time flow by.

Sitting still can be especially difficult for small children. Fortunately, some levels of sedation are perfectly safe for them as well. But whether a child or a grown adult, the level of sedation a patient receives is determined by the patient and especially the patient’s medical history. Depending on the medical history, an MD Anesthesiologist or a CRNA may be brought in for the case.

Sedation dentistry is not always covered by many insurance companies, so there may be an out-of-pocket expense, which, for most people, is less of a concern than having to face the dentist chair without the sedation.

Used in conjunction with wisdom teeth removal, general extractions, implant placement, root canals or even just a routine semi-annual cleaning, sedation may be as important as any instrument in the dentist’s hands. It does something no amount of soft talking can do. As evinced by Kelly, another of Dr. Verban’s patients: “I avoided the dentist for years. But sedation dentistry allows me to get dental issues fixed without the stress and anxiety of the actual process.”

For more information, you may contact Emil Verban, Jr., DDS at 309-662-8448 or visit www.mcleancountydental.com. McLean County Dental is located at 2103 E. Washington Street in Bloomington. Dr. Verban is certified to perform sedation dentistry and provides his patients both general dentistry expertise and the ability to provide specialized services such as cosmetic procedures and dental implants.