Rodgers Family Pharmacy Continues to Take Care of the Community, One Patient at a Time 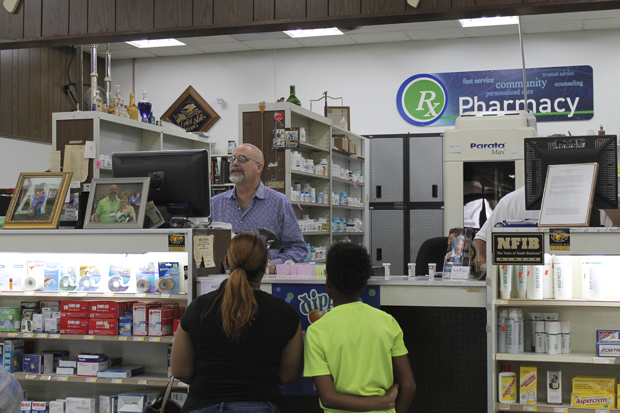 These days, people are grateful just to have the option of picking up their medications at a brick-and-mortar pharmacy as many plans require their members to get all their prescriptions via mail order.

For those given the option of the pharmacy of their choice, as opposed to being restricted to just one or two chain pharmacies, customer service can be dialed up to full blast by visiting Kim Rodgers and his staff at Rodgers Family Pharmacy.

The independently owned pharmacy serves tens of thousands of people across the Pine Belt from its location in Petal’s original central business district. It is conveniently located along many Pine Belt commutes.

Ironically, the very laws seemingly meant to strangle mom and pop pharmacies like Rodgers’ — loads of red tape that any person with a chronic condition undoubtedly is familiar with — is what’s keeping them so attractive.

“For me, personally, I can make my own decisions to help a patient, whereas I couldn’t if I didn’t own my own store,” Rodgers said. “The decisions that I make are my decisions and I will make decisions that enable me to assist patients to a greater degree.”

What does that mean? That means he does not have to abide by the endless number of policies that corporate pharmacies have in place as an answer to every regulation born out of the Affordable Care Act.

When a patient runs into a roadblock at a corporate pharmacy — something “flags” in the system that their insurance isn’t going to pay for a prescription — a clerk will be prompted to give the customer a series of several steps to take.

A computer will make these decisions based on algorithms regarding a patient’s situation. Software will determine best practices for resolving problems efficiently (and at as little cost as possible to that pharmacy chain, which already enjoys the perks of lean operation due to volume).

Don’t expect them to just pick up the phone for you and resolve it, at least not every time.

No red tape too sticky for Rodgers to rip
Consider the situation of a Rodgers Pharmacy customer who had advanced-stage melanoma. Due to the nature of the drug he had been prescribed, Rodgers had to become a “sponsor pharmacy” to dispense the drug.

The monthly medication cost $21,000 every other month. Guidelines are created as such to discourage smaller pharmacies from dispensing high-dollar drugs. Insurers would rather work with fewer, larger pharmacies who streamline processes on economy of scale.

The problem is, those pharmacies protect their economies of scale by passing along cumbersome red tape requirements that come along with certain medications to the consumers. It can be intimidating and confusing for lay-people to figure out the various bureaucracies involved with approval.

Rodgers is a red tape ripper in that regard, if necessary, and when within his domain. “We worked with [the cancer patient] to get it pre-approved with the insurance company so the company would pay for his medication,” he told Healthy Cells Magazine.

“The man passed away 18 months later, but without this medication, he probably would have passed away much sooner,” Rodgers continued. “The patient’s family saw how we worked with him through the entire process. Because we treated him well, others in his family began doing business with us.”

“At the end of the day, you can’t always look to the bottom line. What should guide you is what’s good for the patient.”

Find an affordable gift while filling scripts
Rodgers speaks with the kind of sincerity we all seek in the people we do business with. He talks modestly about his pharmacy’s offerings. While it’s not a big box store, it does offer the types of things people have come to expect pharmacies to offer.

In fact, it’s a rather large space for an independently owned pharmacy. While most are doing well to offer even 2,000 square feet of retail space, Rodgers has 6,500.

The store offers affordable gifts, including Mississippi-made pottery items and the popular Tyler candle line. It also has all the things you would expect to find at a traditional family-owned pharmacy, including health and beauty items and other non-food essentials.

When picking up or dropping off a prescription, or even waiting while a prescription is filled (like in the old days), it’s a great time to peruse greeting cards for that special someone. You also can find little trinkets for yourself and others without the hassle of waiting in line at those gigantic big box stores.

Small-town pharmacy, modern-day conveniences
While people approaching retirement, and even some Gen Xers, can remember the days of family-owned, hometown pharmacies as the norm, the younger set do not. To that end, Rodgers plans to ramp up the pharmacy’s social media presence soon.

He admits that’s not something he knows a lot about. His son-in-law, who is in pharmacy school, is going to handle that.

While Rodgers’ son-in-law no doubt has fresh ideas that come from being in a learning environment every day, Kim Rodgers already runs a completely modernized pharmacy.

Prescriptions are filled by robotics, which ensures nearly flawless accuracy over a lifetime of use.

They still are double-checked by a pharmacist, however. A patient’s safety is paramount at Rodgers Family Pharmacy.

A state-of-the-art electronic medical records system allows your doctor to access anything they need regarding your medications.

“Our technology caters to younger patients,” Rogers said. “Young people like to see that pharmacies are keeping up with the times. We attract a lot of young customers to our store with the technology we use.”

Rodgers provides signature friendly service
“We say hello to the patient when they come into our store, and we ask them how they are doing,” Kim said. “Before they leave, we thank them for doing business with us. We want to know our customers’ names, and we want them to know ours. It’s about building relationships. The little things are significant.”

Rodgers got married in 1981 and his wife advised him to try a pharmacy career. He graduated from the University of Mississippi in 1985 and after graduation he received a call from a friend who did relief work for what was then Gamble’s Drugs. He asked if Rodgers could fill in for him.

Rodgers said yes, and in May 1990, purchased the pharmacy that had been serving Petal since 1959.

Perhaps even more important than Kim’s schooling and work ethic is his southern sensibility. He knows what customer service is all about. After all, he’s not new at this.

“Our number-one priority is to take care of our patients,” Kim said. “We educate our patients regarding their medications and discuss with them the proper way to take it.

“I think a pharmacist should be very involved with their patients along these lines [as they] so closely affect their health and wellbeing.”

In an era when most Americans have had their fill of pharma’s pocketbook-squeezing muscle, mom and pop pharmacists like Kim Rodgers are a friendly face whose only concern is you.

Rodgers Family Pharmacy has been providing local service for over 50 years and is located at 130 W. Central Avenue, Petal, MS. For more information, please call 601-582-8351. Back to Top
September 03, 2017
Categories:  Feature