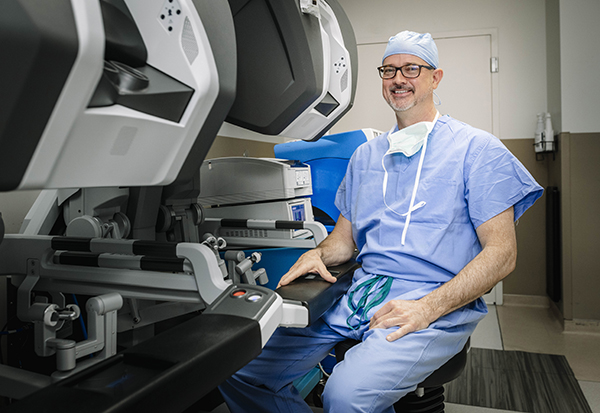 The surgeons at Springfield Clinic Peoria offer a full range of robotic surgical treatment options. Hernias of the groin, diaphragm, umbilicus and abdominal wall, diseases of the colon and rectum, stomach and esophagus, gallbladder, liver, spleen and adrenal glands are all treated using this state-of-the-art technology. The advantages of robotic surgery include smaller incisions, shorter length of hospital stay, reduced pain, better cosmesis, decreased blood loss as well as reduced ergonomic strain on surgeons, which can take a toll over many years of operating.

While robotic surgery has become commonplace in many places, including Peoria, it would be a mistake to not highlight how Whiskey City was a pioneer in yet another field. In line with Peoria’s impressive streak of innovation in areas like distilling, manufacturing, and the automobile (think Duryea), Peoria can make claim to many firsts in medicine as well.

In 2000, the da Vinci robotic system was the first telerobotic manipulation system approved by the Food and Drug Administration for use in the USA for intraabdominal surgery. Originally, it was developed by the US Department of Defense to allow the surgeon to operate from a safer remote location. Its seed money came from the Strategic Defense Initiative, aka the “Star Wars” program, during the 1980s. It provided a three-dimensional (3D) image, tremor reduction, motion scaling, up to ten-fold magnification, surgeon camera control as well as said comfortable ergonomics for the operating surgeon. This technology allows the surgeon greater precision, through small incisions that speeds recovery and return to normal activities. While the goals of remote surgery never panned out, largely due to network limitations at the time, robotics took off in the private sector over the following decades.

Well before becoming commonplace, and soon after FDA approval, in 2002 Peoria Surgical Group was the FIRST private practice group in the entire United States to purchase the system, right here in central Illinois. This purchase was spearheaded by the pioneering vision of Dr. Tom Rossi who was the first general surgeon in central Illinois to perform surgery using this new technology. The group then went on to be not only early adopters of the technology but leaders in the descriptions of technique in the surgical journals and books read by surgeons around the world, with Dr. David Crawford first publishing in 2006. The first robotic operations in central Illinois for heartburn, esophageal swallowing problems, gallbladder disease, colon disease as well as disorders of the spleen and adrenal glands were all done by these leaders. Dr. Crawford traveled locally and nationally teaching robotic surgical techniques in the early 2000s and was named as one of the first few national, and Illinois’ first, general surgery Epicenter Surgeon. Peoria became a destination for surgeons to come and watch Dr. Crawford operate. Observer surgeons came from around the United States and from as far away as South Africa, Australia, and the United Kingdom.

Surgical education has always been of critical importance to Peoria Surgical Group, now Springfield Clinic, LLP. In 2004, Dr. Crawford and Dr. Vegunta in their teaching roles at the University of Illinois College of Medicine at Peoria’s Department of Surgery were one of the nation’s first programs to create a curriculum for the surgical residents to be trained in robotic surgery. These curricula involved lecture, skills labs, and hands on education with mentoring that became the template for several other surgical training programs around the nation. This effort has led to generations of surgical trainees now being comfortable with the technology and being able to offer it to their patients.
Springfield Clinic continues to lead the community in surgical innovation, quality care, and best patient outcomes possible.

Drs. Alley, Crawford, Evans, Fischer, Hopping, Orcutt, and Tsoraides are seeing new patients every week in Peoria offices and operate at all Peoria hospitals. You can choose your hospital AND your doctor in YOUR community. These names carry on the legacy of Peoria’s innovation. When you think of Pabst, Walker, Duryea and Caterpillar, don’t forget to add Springfield Clinic Peoria to that list for medical innovation. Back to Top
June 05, 2022