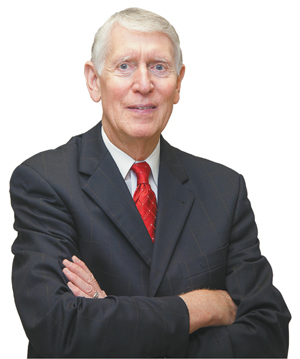 Road construction is an overly familiar sight in the Midwest. Even deep into the winter months, it is not uncommon to see a “road closed” sign warning away irritated commuters. Only once in a while is there a sign indicating a planned detour. But for those more adventurous souls, there is something exciting about creating one’s own detour. In this way, a closed avenue may lead to the exploration of paths previously not experienced.

Such was the life of Dennis Kagel of Dennis Kagel Financial Services in Normal. Because he is known in Central Illinois for his financial and investment savvy, it may be surprising to learn that it was closed roads and detours that brought him where he is today.

Off the Base Path
A self-proclaimed small town boy, Dennis Kagel said he “grew up on a farm about 12 miles east of here.” Graduating from Octavia High School in Colfax, he then attended Illinois Wesleyan University, happy with the atmosphere and opportunities the towns of Central Illinois provided. “I’ve been around here most of my life,” he goes on to say. “I think Bloomington-Normal is a great place to raise a family and establish a business.”

Even though the success he has had in his own business and his “A+” rating with the Better Business Bureau prove the veracity of his words, establishing such a business was not even on the horizon when Dennis attended IWU.

“I had always been very active in sports,” he recalls. “I played basketball and baseball at Wesleyan.” He was captain of the IWU basketball team both his junior and senior years, and he even set the career scoring record at the university. ”It’s been broken several times since,” he laughs.

But the games ran in his blood. Even when his collegiate career came to an end, he sought to maintain a life on the court and diamond, albeit no longer as a player. “You know what they say: when nobody wants you to play anymore, you become a coach,” he jokes, good-naturedly. “I would like to have gone on to play somewhere else, but no one else wanted me to play beyond that level, so I became a coach and a high school teacher for 11 years in the small towns in the area.”

Traveling the sports road is what ironically led him to his current profession of 38 years. “I didn’t really get into the [financial] business by design. I got into [it] quite by accident,” he recollects. “I was with a coach friend of mine and we were at the state basketball tournament in 1976.” Franklin Financial Services Corporation in Springfield, Illinois had a hospitality room at the tournament and, according to Dennis, “a friend of mine who was with Franklin dragged me into this room against my will. I signed a registration card and [later] they came to see me.”

With wide-open summers and a need for supplementary income, educators like Dennis were prime candidates for financial companies in the 1970s. “I got into the business in 1976 on a part-time basis. I experimented with it, got my insurance license and tried it. I was part-time for about seven years and several of my friends made the transition out of education and into the insurance and financial services businesses. I thought if they can do it, I can do it. I made the transition to full-time in 1983.”

Philosophy of Finance
Even before becoming an independent representative in 2002, Dennis has labored to develop an investment strategy somewhat different from the traditional forms with which people might be familiar — a strategy he calls ‘”the lazy investor.”

“We don’t deal with individual stocks,” he goes on to say. “We’re not in and out, [making] buy-and-sell decisions every day. We’re more conservative, more long-term, with the kind of programs we put together for people.”

This conservative investment philosophy is especially enticing to those in whom Dennis specializes: retirees and pre-retirees.

“Even though we serve everybody in terms of their stage of life or their age,” Dennis assures, “this philosophy lends itself naturally to people at that [later] stage of their life, because if there’s anything you want to have in retirement, you want to be financially secure and not worried about having to go back to work. You want to retire on your own terms.”

A simplified peek into their “financial planning approach” works “regardless of your age,” he insists. “We talk to people about dividing their investable assets into three categories: yellow money, green money, and red money.”

“Yellow money would be very easy to define,” Dennis describes. “That’s money in the bank or credit union. It’s totally safe and it’s totally liquid. Very low returns, but this is money you’re going to use over the next 6 to 24 months. We tell people they need 5 percent there, just as a starting point.”

The level of investment known as green money is marked by three major characteristics: “your principle is guaranteed at all times, it allows you to retain your gains, and it will guarantee your income at some point in the future.”

This last criterion is perhaps the most important, “because people are living longer, pensions are going away, who knows about Social Security and the future of that,” he says. “People are left, more than ever in the history of our country, to their own means to provide a comfortable financial future.”

Red money, as the name intimates, is “money at risk: stocks, mutual funds, real estate investments trusts, gold and silver, variable annuities, anything that’s tied to the market.” Dennis explains that as one ages, less and less of one’s investable or liquid assets should be put into this latter category.

These investment strategies have led to a “high level of activity” for the business. “The only way we can manage the activity we have is with a competent and professional staff,” Dennis insists. “Ralene Lartz and Evelyn Ehlers do just a tremendous job for us. Their experience along with their friendly service-oriented attitude helps us execute our ‘Client First’ mission statement on a daily basis. It gets pretty crazy busy around here at times and, believe me, I realize every day that I couldn’t get it done without them.”

The Relationship Business
From the outset of his career, Dennis Kagel has understood that to be trusted with other people’s money, their savings, their accrued life hopes, is not something to be taken lightly. Such a trust requires a sober dedication to the individual, “identify[ing] every person’s challenge” — not losing any money, leaving money to children, wanting to retire early, etc. “What makes it so interesting is that every case is different, every person is different,” he says. “We do case analysis and case design that is different for everybody.”

Addressing those individual needs, in the early days, required a drive — figuratively and literally —which many people would find difficult to deal with. “For 20 plus years I drove all over, going to people’s homes at night,” he recalls. “It was scary on a daily basis because you didn’t have clients and you didn’t know who you were going to go talk to… and there wasn’t enough activity. There were a lot of these uncertain, fearful moments with very little compensation.”

Dennis’ family shared in those uncertain times. “I’d certainly be remiss if I didn’t give them the credit they deserve for the success we’ve enjoyed,” he says. “My wife Penny is 100 percent supportive and understanding of what it takes for me to accomplish my goals — the long, irregular hours, the traveling — she’s always great about that. I have two great kids, Todd and Stephanie, who I could not be prouder of. They’ve both done so well with their own careers and families.”

But those years of uncertainty, he realizes, were “part of the process of growth. Without those, I wouldn’t be where I am today. It was an apprenticeship of sorts.” And the dedication paid off. “I look back with a lot of fond memories because that’s where my first clients came from and many of those people are still with me today.”

“I realized a long time ago that I’m really in the relationship business,” Dennis continues. “I’m really not in the transaction business… There’s nothing I enjoy more than really getting to know that person beyond a business relationship.”

Part of getting to know people means preparing them for those unforeseen “financial detours,” such as unexpected health care expenses and other variables that can throw their financial plan off track. This is particularly true with the retired and pre-retired majority of Dennis’ clientele. “Health care is the biggest single unknown as far as a financial commitment or emergency,” he states. “People are going to be left with a few options — not a lot — to address that: good health insurance coverage (with a Medicare Supplement), some plan for addressing the possibility of long-term care expenses, and possibly certain types of Trusts to protect and
distribute assets.”

“With proper planning and the right strategies,” he assures, “you can remove a lot of the financial question marks about your future. You can retire with the certainty that this is going to work. What we do is we answer those questions.”

Although it has been said that the journey is better than the destination, a king’s portion of satisfaction can be found in the recollection of the journey and taking joy in where the journey has led you. “It’s been really kind of fun to think back at where I’ve come from, and some of those fears and personal challenges have gone away,” Dennis recalls.

Now, those challenges and fears have been replaced with the happiness that comes from engaging in other people’s journeys — detours and all — alongside them. “That’s really a neat part of my business,” Dennis smiles. “You really grow with people, you see their families grow, you see them progress through their careers, you see them transition into retirement. You kind of live these experiences with them. Many of our clients have become like family.”

For more information or to schedule a no-cost, no-obligation visit, you may call Dennis Kagel at 309-454-9171 or visit his website: www.safemoneywizard.com. His office is located at 321 Susan Drive, Suite A, in Normal. Back to Top
Dennis Kagel, Investment Advisor| December 02, 2014
Categories:  Feature