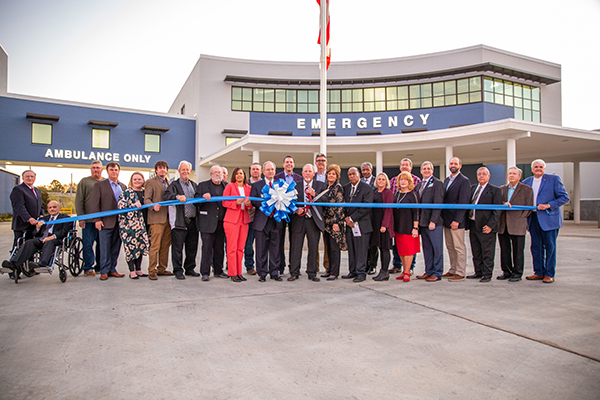 Doug Higginbotham, President and Chief Executive Officer, said, we celebrate the completion of a construction project that has been on the drawing board for more than 14 years. The process of acquiring the land these new facilities are located on today took us 11 years, and another year was required to design the project. During this period, we dealt with many individuals and agencies. As a result of their cooperation, we are here today celebrating the completion of a $33 million project that includes a new Emergency Department, Medical Office Building, Wellness Center, Rehabilitation Center, helicopter landing pad and additional parking. These facilities will benefit the residents of Jones County and surrounding counties for many years to come. The new Emergency Department opened on Thursday, December 12 at 3am. South Central Clinics and South Central Wellness Center and Rehabilitation Center moved the weeks following the opening.

Facility Names of Those Location in the Medical Office Complex include:
This project would not be possible without the help and support of the members of the Jones County Board of Supervisors—Jerome Wyatt, Johnny Burnett, Barry Saul, Danny Roy Spradley and David Scruggs, as well as the support of past members of the Board of Supervisors. The Jones County Board of Supervisors has always supported our institution in efforts to improve access to healthcare in Jones and surrounding counties. Members of the South Central Regional Medical Center Board of Trustees—George Walters, Victor Jones, Lewis Goins, Mike Lowe, Becky Brewer, Arthur Siggers, Jay Scoggin and Frank Therrell, past member of our board—spent numerous hours over the years making decisions to get us to this point. During the property acquisition and project development timeframe, South Central Regional Medical Center had the support of three Laurel mayors, Susan Vincent, Melvin Mack and Johnny Magee, as well as Laurel City Council members past and present. Their support came in the form of making some modifications to the “S” curve project and on land acquisition. We also worked with Tom King, Transportation Commissioner, the Corp of Engineers, the Mississippi State Department of Health, and numerous attorneys and financial advisors.

Laurel native Mike Foil of Foil-Wyatt Architects and Planners in Jackson was the architect for the project. He has worked with South Central for more than 30 years on various projects. Because of his knowledge of our operations, Foil was a valuable partner in designing the project. The firm has completed projects on over 30 university and hospital campuses throughout North America. Other members of the architectural and planning firm team who worked closely with us on this project include Justin Parker, Carley Dunaway, and Bob Pressley.

The successful bidder on the project was Mac’s Construction Company of Hattiesburg. Mac’s has a reputation as a quality organization that has done many large projects. Their goal was to provide our community a facility we could be proud of while providing uninterrupted patient care as well as staff and visitor safety throughout the construction project. They accomplished their goal. Andy Simmons, Hal McMann and Steve Hatten, all with Mac’s Construction, led the efforts on the project.

South Central Regional Medical Center has been in this community for more than 67 years. Today, the South Central Health System includes a 285-bed regional medical center, 23 medical clinics, a cancer center, 2 large nursing homes, an ambulance service, a wellness and rehabilitation center, a wound care center and numerous other programs and services. We are the second largest employer in Jones County with more than 2,100 employees and an economic impact to our local community annually of more than $200 million.  We are extremely proud of the new facilities that will allow us to improve access and care to the residents of Jones County and surrounding areas.

South Central Regional Medical Center appreciates the support of the community and looks forward to serving all. Back to Top
January 09, 2020