Quad City Storm: Fulfilling Their Promise to Be the Community's Team 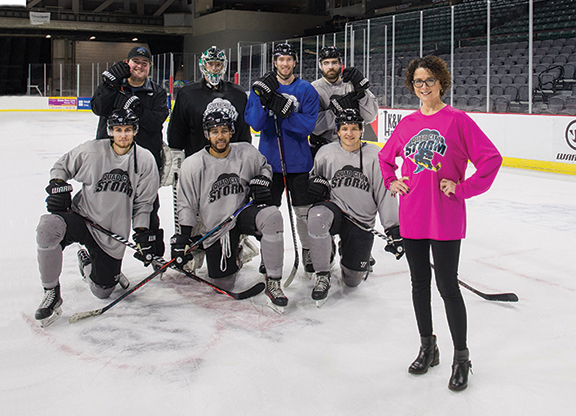 Now that the team had local owners who cared about the Quad Cities, they started building their team from the ground up. The first hire needed was the team president, and they didn’t have far to look. Gwen Tombergs was working for the Quad Cities Chamber and just finishing the first Quad Cities Big Table, an initiative to bring the Quad Cities closer as a community. She wasn’t looking for a change but knew it would take someone with a lot of connections to get a new team off the ground. “We had 130 days to get a name, logo, coach, staff, office set up, and sponsorships and tickets sold,” Tombergs said. “I was up for the challenge but knew I needed a lot of supporters behind me.” The Quad City Storm, with the first female president in the Quad Cities hockey history and Southern Professional Hockey League, was started.

Tombergs also knew she had to bring in new fans. “I wasn’t necessarily a hockey enthusiast but knew that professional sports is good for the community, helps make a vibrant downtown, increases the tax base, and makes the Quad Cities a great place to live. For us to make hockey work, we need non-hockey fans to come to one or two games a season. When the owners said they wanted this to be the community’s team, we decided to put our money where our promise was.” So, giving back to nonprofits became the goal.

Every single Quad City Storm game has money going to a nonprofit through the team’s Chuck-A-Puck promotion (fans buy foam pucks to throw on the ice to win prizes.) Then the Storm chose the Big 5 games to give back even more. These games are targeted to have the largest attendance, creating an opportunity for the Storm to give back even more. With a portion of the ticket proceeds and a specialty jersey that is auctioned off after several games, the first two Big 5 games have given United Way $10,300 and Trinity Foundation’s Military Services Fund $17,500. Through 15 home games, the Storm has given back over $43,000 back to local nonprofits.

The Quad City Storm created a program for nonprofits to receive money back if they bring a group to a game. This can also be used for companies who want to raise money for a nonprofit. All they have to do is book a group, and the Storm will give back $8 on every $20 ticket or $5 on $15 tickets. For example, nonprofit A brings 100 people to a game and they bought $20 seats. The Storm will write that nonprofit an $800 check! With a new online ticketing program called Fevo (similar to Ticketmaster) the Storm can have groups sit in the same section but pay for their own tickets. No more handling tickets or money! Just share a code with your staff, volunteers, and board and let everyone pay for their own seats and sit together.

Yet ownership knew there needed to be one more thing added. The team needed to be out in the community and make the Quad Cities their home while they are here. This was an easy task. First-time Coach Dave Pszenyczny’s philosophy was that he not only wanted good players, but good people on his team. The guys know when they arrive that being a part of our community is part of the job. From ringing the Salvation Army bell, to school and hospital visits, the Storm players have been having fun interacting with Quad Citizens of all ages.

“This is what will bring new fans to our games,” said Tombergs. “We have had more new fans because they came for something else and fell in love with the Storm while they were here. Plus our social media is funny and engaging, and we are brining new people into our world for one reason or another every day.”

A promise well kept. A community’s team who gives back. Go Storm!

If you have a group of 10 or more or require special seating, contact Joe Kazmier at 309-277-1364 or joe@quadcitystorm.com.
If you have any questions about the event, please contact Rhonda Halterman at 563-265-1553 or rhonda@livwellseniors.com. #QCSTORMCARES Back to Top
February 04, 2019
Categories:  Feature
Keywords:  Feature Story