Protect Yourself From Insect & Animal-Related Injuries at Home and Away 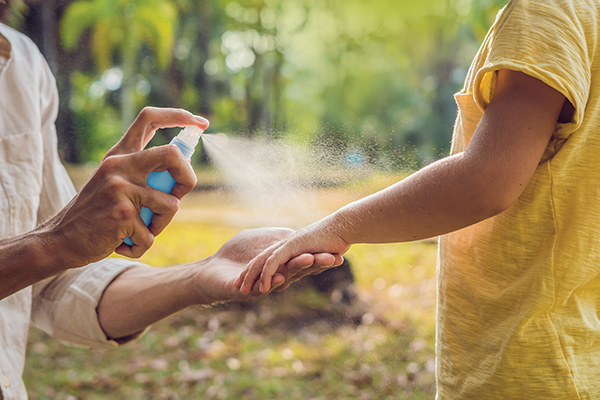 Each year, 1.3 million Americans are treated in emergency rooms for animal-related injuries, according to the Healthcare Cost and Utilization Project published by the Agency for Healthcare Research and Quality. Roughly 232 people die from their injuries. Dr. Joseph Forrester, the co-author of a study published in the British Medical Journal, December 2018, says the rate of animal-related injuries is on the rise. He attributes this in part to climate change because non-venomous arthropods, such as mosquitoes, ticks, spiders, and centipedes, thrive in warmer temperatures. Arthropods now account for 41 percent of all animal injuries.

With 89.7 million dogs living in U.S. households and not always being able to predict or control the presence of insects and wildlife, the number of animal-related injuries isn't surprising. Still, there are precautions you can take to prevent or reduce your risk of injury.

Begin by learning about the particular animals and insects found in your area and what types of risks they pose. When planning to travel, particularly to another state, country, or even a different eco-system nearby, research the animal and insect-related risks before you go. The following are some of the most common or deadliest culprits.

Arthropods
These creatures can be venomous, which is actively injected through a bite or sting. But non-venomous arthropods, which are nonetheless often poisonous, cause the largest number of animal-related deaths each year. So the first step to protecting yourself is knowing which ones pose a danger, and what those specific arthropods look like.

The black widow, Arizona bark scorpion, centipede, brown recluse, and tarantula are the most poisonous arthropods in America and can be deadly. But there are many other arthropods to be cautious of as well. Many have urticating hairs that can cause irritation or even allergic reactions when touched. The tarantula can also eject its abdominal hairs toward its potential attacker. Caterpillars have these hairs as well.

Mosquitoes and ticks, among other arthropods, can also carry and transmit diseases. Unlike most arthropods that want nothing to do with us, blood-feeding arthropods are fearless and relentless.

Given the enormous variety of arthropods, the best prevention is to avoid touching them unless you know what they are and their potential risk. To protect from mosquitoes and other blood-feeding arthropods, use repellents. If you're in a wooded or another area where they're likely to be present, wear pants and long sleeves as well.

Bees, Hornets, and Wasps
These also are arthropods. There are some differences in the aggressiveness between bees, hornets, and wasps. Hornets are the most aggressive. But all three will defend themselves if they sense danger. To reduce your risk of being stung, don't go outside barefoot. Keep vibrating equipment such as lawnmowers and weed whackers away from nests and hives. Don't drink from soda cans, especially if they've been outdoors. Also, avoid wearing cologne, lotion, antiperspirant, or other products with sweet or floral scents.

Try to keep your distance from these pests, especially their nests or hives. If a bee is near you, be still rather than swat at it to reduce the risk of it seeing you as a threat. If you are stung, calmly move from the area immediately. Some hornets, wasps, and bees release a pheromone during the sting that sounds an alarm to others, which can bring a swarm.

In the event you are swarmed, it's time to run as fast as you can. Pull your shirt over your face and head to protect yourself from stings. Don't swat at them, which will only anger them more, and get to shelter as fast as possible.

Dogs
Dog bites have the third-highest death rates among animal-related injuries. Adults, and particularly children, should avoid approaching strange dogs that are unattended. Even when a dog is with its owner, ask permission before approaching it.

When you do approach a dog, avoid scaring it. Otherwise, it could bite. Walk at a leisurely pace. If the dog shows signs of fear or discomfort, stop and allow the dog to come to you. Don't reach your hand out for the dog to sniff. Instead, keep your arm relaxed and let the dog approach and sniff your hand. If the dog seems comfortable, you can then pet the dog in a calm, gentle manner.

Also, avoid direct eye contact with dogs because dogs can perceive that as a threat. If the dog is small, face to the side and kneel down. Just don't get your face too close. Never hug a dog you don't know well. Dogs will usually tolerate hugs from their own families, but they generally dislike hugs.

If you have grandkids or young guests, children should be particularly cautious. Many dogs aren't raised with kids and are fearful of kids' high-pitched voices and quick movements. However, most kids who get bitten by dogs are by ones they're familiar with. Dogs can bite or attack a child for many reasons. Young children, in particular, don't understand boundaries, which poses a high-risk situation. So close monitoring is crucial.

Also, teach grandkids to never run from a dog, whether it's yours, their own, or another. Some dogs see a running child as prey. Kids shouldn't play with dogs without adult supervision. They also shouldn't disturb dogs that are sleeping, eating, or in the presence of their puppies.

But there are other ways people are injured by dogs as well. For example, bicycling with a leashed dog is dangerous. There's a high risk of dogs either abruptly stopping or pulling, which has caused many a crash. Add to that, bicycling with a leashed dog can be cruel and dangerous to your beloved pet. Dogs can get run over by the bike and also incur injuries to the trachea and spine from the pulling on the dog's neck. Overexercising can also be deadly to dogs. Many breeds, both large and small, have cooling systems that are quickly and easily taxed.

Rats
The deadliest bites come from rats. Of every 10,000 people bitten by a rat, 6.5 dies. People who own pet rats may see them as safe, but pet rats can also carry germs, such as Salmonella. If you have a pet rat, read up on how to properly care for it to reduce the risk of it becoming sick and spreading germs.

Wild rats can carry rabies among other diseases and germs that pose risks to humans. So never approach a wild rat. Rats can also spread disease through their urine and feces. If there are wild rats on your property or in your home, use recommended measures to eliminate them immediately.

Snakes and Lizards
While lizard and snake bites aren't in the top 3 animal-related injuries, they do have the second-highest death rate for those who are bitten. The only venomous or poisonous lizards in the U.S. are the Gila monster and Mexican beaded lizard, found in the desert southwest.

The best way to protect against a snake bite is to avoid snakes. If you see one, don't attempt to approach it or provoke it. Snakes are terrified of humans, so those that are venomous won't hesitate to protect themselves. If you're traveling to or live in an area that's home to venomous snakes, learn when and where they're likely to be encountered, and take extra precautions.

So, as we enter the warmer months here in the Midwest or if you travel to a warmer state anytime of year, it's important to be aware of the presence of these insects and wildlife, how best to avoid them, and the safest way to respond should you encounter them. By being prepared, you'll greatly reduce your risk of illness or injury while enjoying everything the wonderful world of nature has to offer us.