Pediatric Care From Head to Toe 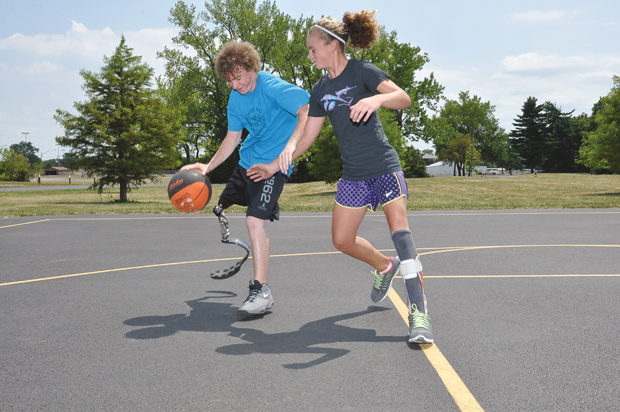 In 1843, Charles Dickens introduced the world to a character so memorable that the name Scrooge is still synonymous with “miserly cynicism” in the modern day. However, the unjust suffering experienced by a child, Tiny Tim Cratchit, softened the old man’s heart more than any other memory or fear Scrooge experienced during his harrowing night.

Unable to walk, Tiny Tim was a tragic figure—a young boy incapable of experiencing childhood the way most children did. However, had Tiny Tim access to the aid available at Comprehensive Prosthetics and Orthotics (CPO), his childhood may have been far more favorable.

Although CPO helps people of all ages in Central Illinois, their certified orthotists and prosthetists take a particular joy in providing whatever care is necessary in order that children, who were previously unable to live lives like those of their peers, can experience the simple joys of childhood.

From Many Paths — One
Opening in Peoria in 2005, Comprehensive Prosthetics and Orthotics has since spread to 20 locations, but has always had the goal of being a worldwide caregiver in the field of orthotics and prosthetics. Staffed by certified and licensed experts from a variety of backgrounds, the one thing they all have in common is their love for the job.

“My undergrad is in exercise science, so I’ve always been involved with the human body and helping people reach their goals physically,” says Robin McRae, MEd, CP, LP, CFo. “One of my best friends, who is also a prosthetist, said I would do well in this field and would love it. So I checked it out and she was right. I started out as a technician, learning how to fabricate prosthetic devices and then went back to Northwestern University to become a prosthetist. I can finally say that I found a career I love.” With degrees in exercise science and sports management, Robin has a special interest in supporting athletes, children, and other active individuals who have experienced limb loss.

Working in the orthotic and prosthetic field since 2001, Tracy Melton, BS, CPO, LPO, CPed, LPed, started his career as a lab technician. “I enjoyed working in the field and went to Roselyn Franklin University for the pedorthic program. After working with patients more and more, I decided to go back to school to complete my undergrad, and then went to Northwestern Feinberg School of Medicine for the orthotics and prosthetics program.”

A father of two young children, Tracy found a niche in helping the young of Central Illinois. He does not mind taking his work home with him. His children “were test-fit with a number of devices when they were younger because I wanted to try them out on somebody,” he jokes.

“I originally wanted to study radiology,” says Jill Grieff, CPOA, CFom. “But one of my dad’s friends told me about a new program at Joliet Junior College in orthotic and prosthetic technology, so I went for it. I’m very hands-on and loved to play with tools when I was little. I went to school to be a technician and then transitioned to provide more patient care.” That patient involvement has since translated into working with breast cancer and lymphedema patients while also assisting in orthotic and prosthetic care.

Making up the other half of the team at Bloomington Comprehensive Prosthetics and Orthotics are Don Goertzen, CP, LPO, BOCPO, a co-owner of CPO and an amputee himself, which gives him an empathic connection to many of CPO’s patients; and Dennis Dillard, a certified pedorthist and orthotics technician who specializes in education and direct care for diabetic and arthritic patients. They are each here once a week and spend their other days in the Peoria CPO office.

Fit the Head Fit the Body
There is no age limit to those who are in need of CPO’s services. Although it is not surprising to see a full grown adult in need of orthotic or prosthetic care, to think there are those so young they are not even able to speak yet, also benefiting from this type of care, can be somewhat shocking.

There are many reasons a child may need orthotic or prosthetic intervention. “Sometimes infants are seen days after birth due to hip dysplasia and need an orthosis for proper hip positioning. Some children are seen at several months old needing a cranial helmet for deformational plagiocephaly,” explains Tracy Melton.

“We also see children for ankle foot orthoses (AFO), which can be for many different reasons.” Tracy continues, “Sometimes it’s more for stabilizing the child’s feet as they grow. Sometimes they grow out of the need for the devices, while other times it may be needed for the rest of their lives. During the adolescent years we tend to see more patients needing spinal orthoses, such as those for scoliosis, or sports injuries requiring varying types of supportive devices or even protective face masks.”

Fortunately, less common are the children who require more permanent solutions due to a lack of an upper or lower extremity. There are several reasons a child may be seen for prosthetic intervention. Oftentimes a child is born missing an upper or lower extremity or even part of an extremity that leads to an amputation. Sometimes it may be trauma and many times it is due to cancer.

Cancer is a bitter pill to swallow at any age, but it carries a far more tragic overtone when it happens in children. That tragedy extends even further when that child must cope with losing an extremity in order to continue living. Cathe Carter is a mother of not one, but two children, Austin and Haley, who had to fight cancer and whose fights took somewhat different approaches. She shares her story:

“Both our son and daughter were diagnosed with Osteosarcoma in their tibia, which is bone cancer in their shin. To remove a bone tumor, the surgeon had to remove the bone. My daughter, Haley, had a surgery called ‘limb sparing,’ to remove two-thirds of her left tibia and replace it with a telescoping rod. They called it an internal prosthesis. Haley was only 9 years old when they did this surgery to remove the cancer. Austin was diagnosed with bone cancer 10 months after Haley. He had the same cancer as Haley, in the same bone as Haley but in a different leg. Austin had the same limb-sparing surgery as Haley; however, there was a complication during surgery and he had to have his right leg amputated just above the knee.

“Because of the procedure, Haley developed foot drop which means she is unable to lift her toes during normal walking. To compensate, Haley wears an AFO, which allows her foot to stay at 90 degrees and prevents her foot from ‘dropping.’  Haley is now 16 years old and she never goes anywhere without her AFO. It makes her feel secure and confident. As long as she wears it, she can do just about any activity she wants. Haley is even the goalie for the Bloomington/Normal Lady Warriors lacrosse team. She wouldn’t be able to participate in this sport if it weren’t for her AFO giving her the support she needs.”

Since Austin’s amputation, he has let little slow him down. He was 12 when he lost his leg to cancer and is now 18. He has a prosthetic leg that allows him to participate in all kinds of activities. He is very active and does everything, from ride his bike to rollerblading. He never lets his prosthetic leg limit him. He also has a running foot (blade) he can put on his prosthesis that allows him to run, play basketball, and do other physical activities with ease. As Austin has grown, CPO has been there to provide him with a different leg to meet those growth changes.

“I do not know what our family would do without Comprehensive Prosthetics and Orthotics,” Cathe says. “Everyone in that office is so nice and flexible to help meet our family’s needs. Austin and Haley can continue being normal teenage kids who are healthy and active with the help of their prosthetic and orthotic devices.”

Adapt to Survive
Losing a limb is a trial with which most people are unfamiliar, so being able to understand how anyone, least of all a child, can live a normal life afterward may seem an impossible task. It becomes even more miraculous, then, to discover many of these children thrive after an amputation.

Children adapt well to most any situation and that is usually the case with amputation as well. Some children are born with a deformity of an extremity such as fibular hemimelia. This is when a child is born without the fibula (the small bone in the lower leg). When the leg can no longer be managed through orthotic care, the decision to amputate often needs to be made in order to be functional. Such was the case with Seth Melvin.

Seth’s condition, fibular hemimelia, is degenerative and it resulted with the right leg being shorter than the left. Before his amputation, he walked with a limp, even with the aid of his orthosis and shoe lift. At 15, Seth, along with his parents, made the decision to have his leg amputated. Seth felt that his leg with the deformity was holding him back. Since the amputation, he has returned to playing the drums, which he loves, running around with his friends and playing sports. He plays basketball and wants to run track as well. Seth has not let his amputation slow him down; in fact, it has allowed him to feel more normal and has given him the ability to accomplish more than he ever thought possible.

“It’s exciting to be present for their first steps on their prosthetic. Every day I have a sense of purpose and am humbled by many of my patients and their will to succeed, no matter what,” says Robin McRae.

“It’s a lot of fun when things go really well and they’re excited about being able to walk or function normally again,” Tracy concurs. “It’s a transition to get to that point; there’s a lot of work involved. It’s exciting when they're happy or when their parents are happy.”

And, Robin continues, “For our prosthetic patients more so than our orthotic patients, we’re in their lives forever. They will always need their prosthetic device to live life. If I can make life easier for everyone I have the privilege of working with, I will do my best to make that happen.”

This year, 2015, marks the 10-year anniversary of CPO’s existence. It has since expanded to 20 offices in those 10 years. The continued success of aiding the “Tiny Tim’s” in the area has CPO Services on its way to achieving its goal of becoming the global leader in orthotic and prosthetic care. “As the company continues to grow, we are all here to live up to our mission statement as well as provide the best services and patient care possible,” Tracy concludes.