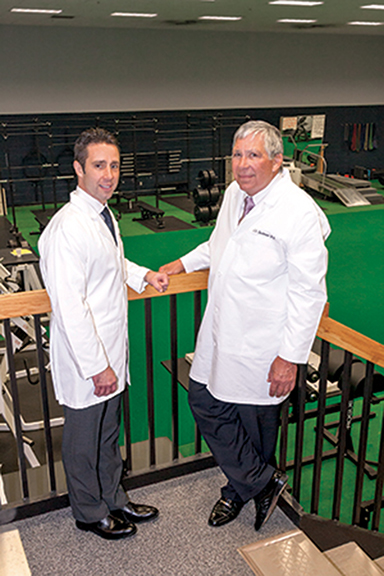 Looking up at the grandest oak tree, it is often easy to forget the humble origins of such a tree lie in a single acorn. The oak is a perfect example of how even the simplest of starts can often be followed by steady growth, strength, and endurance.

Our endeavors in life can be that way. When orthopedic surgeon Dr. J. Anthony Dustman struck out on his own to treat athletic injuries, sports medicine was not even recognized as a specialty in medicine. Pioneering the field in Central Illinois, he and his colleague, Dr. Seidl, saw that spe-cialty as well as their practice, the Orthopedic and Sports Enhancement Center (OSEC), grow from very humble beginnings into a firmly rooted and continually growing practice.

A field in its infancy
Sports medicine went almost unnoticed when Dr. Dustman first arrived in Bloomington/Normal in 1979, due in large part to the fact it essentially did not exist. As the city had a population of roughly a hundred thousand with a university setting; it was exactly what the doctor was looking for.

“When I came here, I became good friends with Dr. Bill Kauth, Sr., who worked in the athletic department at Illinois State University,” Dr. Dustman recalls. “We saw there was an obvious void to fill. The athletes were having to wait two to three weeks to get in to see an orthopedic surgeon; therefore, some of them were playing when they shouldn’t have been playing and their injuries were causing more damage, or they weren’t playing when they could have been.”

A real need for athletes getting medical attention in a more timely fashion is what prompted the start of the first clinic, called simply the Sports Medicine Clinic. “Back then even the term ‘sports medicine’ was hardly ever used,” he says.
The clinic was a bold experiment. Open for three hours after normal school hours, anybody with an injury was seen and helped.

Part of getting that clinic up and running meant also establishing good relationships with more than just the injured athletes. “Bill was instrumental in making it a collaborative practice between the athletic trainer and the physician,” Dr. Dustman says. “He really taught me the importance of the athletic trainer in treating the athlete and resolving his issues. He also knew all the athletes and the coaches in the community.”

“Bill would interact with the coaches and athletes, and I would give my expertise with the orthopedic injuries,” he continues. “It was an ideal partnership.”

No man is an island
As the amount of work increased, so too did Dr. Dustman’s partnerships. Orthopedic surgeon, Dr. Robert Seidl, was his first choice when it came time to become a fullyfledged practice.

“Rob was an extremely important component to the sport center,” Dr. Dustman says. “Without him, we couldn’t have built this to the level we have now. His expertise and his work with me gave us the opportunity to grow.”

“Dr. Dustman had already laid the groundwork,” Dr. Seidl insists, humbly. “He had made a financial commitment and had started and kept those relationships with the athletic departments at the schools.”

Part of making and keeping those relationships is coverage, and coverage means actually attending the football games, every home basketball game, and keeping in constant communication with the schools’ athletic trainers of 13 different schools. “We watch [our athlete patients] through their rehab, with their athletic trainers and we monitor their progress back to play,” the doctor adds.

The relationships are equally important to the coaches. For Illinois State University’s football coach, Brock Spack, Dr. Seidl is, in his opinion, the best in the business. “We trust his evaluations of our players, his judgment, and his advice,” he says. “He is one of the best I have been around in my 30-plus years of coaching and we are lucky to have him around our program.”

Illinois Wesleyan’s football coach, Norm Eash, feels the same way about Dr. Dustman’s work there. “Dr. Dustman gives the highest level of care to our athletes,” he shares. “And we are very fortunate to have a team physician that travels with our football team to away games.
There aren’t many physicians willing to put in that kind of time.”

Their level of success reveals itself in different ways, too. “Even when people thought Dr. Dustman was retired, they still found him,” Dr. Seidl jokes.

“That I’m retired is the rumor out there and that is far from true,” Dr. Dustman laughs. He is, in fact, busier than ever, especially with the continually growing practice.

“We have a spine surgeon, Dr. Nitin Kukkar, who just joined us, which I’m very excited about,” Dr. Seidl says. “We have the new blood we’re training, because even though we maintain our educations, having that fresh mentality when you approach a practice is important.”
Rounding out the orthopedic end of things are foot and ankle specialist Dr. Bryce Paschold, hip and knee surgeon, Dr. Chris Dangles, and orthopedic surgeon, Dr. George Irwin.

“We do a lot of physical therapy as well,” Dr. Dustman adds. Plus there is the Acceleration sports performance program and on-site X-ray and MRI machines to handle any scanning for their patients ‘in-house.’”

“An important part of any orthopedic care is that it has to be collaborative,” the doctor continues. “The nursing staff, the ancillary people and the physicians must be able to easily communicate to make this really work well.”

Such a scope of specialties are necessary at OSEC, Dr. Seidl explains. “We take care of all kinds of patients,” he says. “Certainly there are athletes, but also people who just want to be mobile. It might be a 75-year old who just can’t mow the lawn or walk for enjoyment or ride a bike because they have pain or limitation.”

That is why the doctors feel sports medicine and the orthopedic field are so ideal. “It is a huge blessing and fantastic part of what we do to see patients or their families come in and give us the positive feedback very quickly,” Dr. Seidl says. “To be able to get them back to where they were before an injury — it’s an almost tangible, very gratifying feeling.”

Out of devastation — Success
While Dr. Seidl explains the satisfaction derived from practicing in the field of orthopedics as a whole, the emphasis at OSEC is and always has been sports. Dr. Dustman explains, “Sports were and will always be a big, important part of my life. Not only in my own life, but in the value they provide for all athletes — the direction.”

Sometimes that direction may lead one down circuitous paths, but there are wonderful lessons that can be learned along the way. One such lesson lies in the very origins of OSEC. It is for anybody who believes a sports or orthopedic injury has permanently shut the door on their hopes and dreams.

Sharing his own experience with his patients, Dr. Dustman hopes to be able to prove the fundamental law of sports is true: it’s not over until it’s over.

“Football and flying were my loves, but I had an orthopedic injury and they said I couldn’t play football anymore,” the doctor remembers. “Because of that same thing, it got me classified as 4F, so I couldn’t join the military. I wanted to fly jets, and back then, to become a pilot, you needed to be Air Force trained, but they wouldn’t take me.”

“It was devastating to me,” he continues. “I thought it was the worst thing ever. So, I went to college and medical school to become an orthopedic surgeon because of what happened to me in high school. That injury made me interested in orthopedics and it carried me forward.”

Ironically drafted into the service as a physician, Dr. Dustman was able to serve his country after all, and he has since earned his pilot’s license, which he puts to good use flying to numerous games to see how his patients are taking to the field again.

“I was told, ‘You can never play again.’ I now know that was wrong,” Dr. Dustman says. “That’s why I care so much to make sure an athlete that could once play can still play. I tell my athletes: what seems devastating can end up being a positive story down the road.”

“My story is not nearly as interesting,” Dr. Seidl chimes in. “I never had an idea of doing anything other than orthopedics and sports medicine. I was lucky enough to do what I wanted to do from the start. I knew I wanted to be in a practice where I could do both, and Bloomington/Normal was a perfect spot. It was exactly what I was looking for.”

Dr. Seidl’s career still speaks of unwavering dedication. It is something he sees in his patients: that desire to take to the field again or just back to living their normal lives. That is, after all, the foundation upon which the pioneering institution of OSEC was built.

The board-certified physicians and expert staff at the Orthopedic and Sports Enhancement Center offer the most advanced treatments — including non-surgical options — that minimize pain and speed recovery for people of all ages. You may contact them at 309-663-9300, or check out their website at www.sportsenhancement.net.