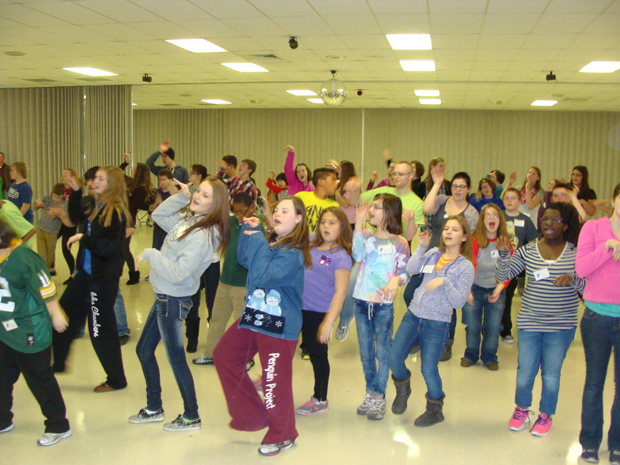 The Penguin Project, a program founded by Dr. Andy Morgan and his wife, Kathy, features a group of young people who take to the stage to perform a modified version of a well-known Broadway musical. These productions are unique because all of the roles are filled by young artists with developmental disabilities. They are joined onstage by their “peer mentors” — a group of children without disabilities who have volunteered to work with them side-by-side through the rehearsals and onstage.

The Penguin Project celebrates its 11th anniversary with an exciting production of Seussical Jr., which will be performed Jan. 23-25 at Eastlight Theatre at East Peoria High School.

“The biggest benefit for many of our artists (also known as penguins) is that they previously were very isolated and they now have established social networks. They have an opportunity to really interact with other kids, not just in the program, but beyond the program. It really creates a social network where there was not one before,” says Dr. Morgan.

“The other benefits are that it helps the kids with their self-esteem and to gain confidence in their abilities to do things. For those kids who had poor socialization skills, they have learned how to interact. Those who did not want to touched or hugged now allow it and even initiate touching. Kids who didn’t really talk are now initiating conversation,” he adds.

For the mentors, the Penguin Project provides an opportunity to help others by being a teacher and a friend. They learn to support their partners, and to encourage them to be as independent as possible. In addition, the program has a special impact on the parents. For the first time, many of them experience the joy of sitting in an audience and watching their child perform and succeed in ways they never thought possible. They have an opportunity to “network” with other parents, not to lobby for rights and services, but to share something encouraging and uplifting.

“Like the children, I think the families are often isolated. The parents may have a very limited social network because they are so busy taking care of their kids and fighting for their kids. This gives them a social network, as well. They come to rehearsal, they meet other parents and learn they are not alone in terms of what they are feeling,” he explains.

Seussical Jr. features Horton the Elephant, the Cat in the Hat, and all of Dr. Seuss’ favorite characters who spring to life onstage. The show will be held at 7:30 p.m. on Friday and Saturday evenings and at 2 p.m. on Sunday afternoon. Tickets are $10 for adults and $5 for youth, with a $1 per ticket service charge for online orders. Student tickets are available only through the box office. For tickets to the production, call 309-699-SHOW (7469) or order online at www.EastlightTheatre.com.

More information about the Penguin Project may be found at www.PenguinProject.org.

Photos courtesy of The Penguin Project Back to Top
January 06, 2015