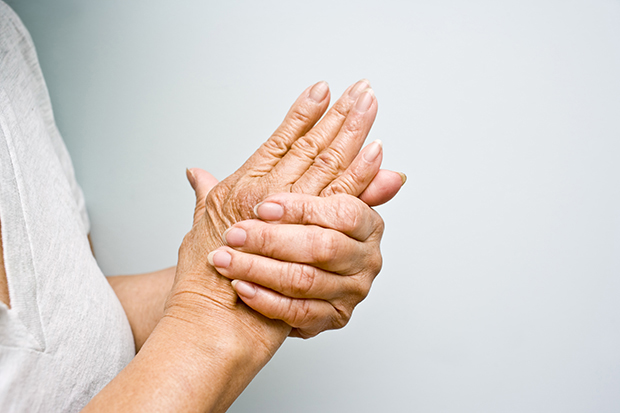 New Therapies
Researchers continue to identify molecules that appear to play a role in rheumatoid arthritis and thus are potential targets for new treatments. The path between identifying the molecule and developing a drug that targets it is long and difficult. Fortunately, this path has been successfully negotiated and new drugs have emerged that successfully reduce symptoms and damage in rheumatoid arthritis. Researchers continue to identify more candidate drugs, with hopes that these will have fewer side effects or will cure more patients.

Tofacitinib, approved for the treatment of rheumatoid arthritis in 2012, is from a new class of drugs developed to target Janus kinases. One member of this family, JAK3, was discovered in the early 1990s by a National Institutes of Health laboratory in the National Institute of Arthritis and Musculoskeletal and Skin Diseases (NIAMS). Subsequent studies carried out at the National Heart, Lung, and Blood Institute (NHLBI), in collaboration with the NIAMS, showed that genetic defects in JAK3 can cause severe combined immunodeficiency. This discovery led to the idea that drugs blocking Janus kinases would suppress the immune system and might be protective against the damaging inflammation of rheumatoid arthritis and certain other autoimmune diseases.

Understanding Joint Destruction
Advances in understanding the processes that lead to joint destruction are bringing NIAMS-supported researchers a step closer to new therapies to stop the destructive process. In one such study, researchers found a factor they suspect plays a crucial role in joint destruction: an adhesion molecule on cells of the synovium called cadherin-11. Adhesion molecules allow individual cells to stick together to form tissues. At normal levels, cadherin-11 enables the cells (synoviocytes) to adhere together to form the lining layer of the synovium. But when overgrowth of the synovium occurs, cadherin plays a key role in the destructive behavior of the synovium; namely, eroding the cartilage, which causes permanent destruction to the joint. In studies of mice prone to a disease similar to human rheumatoid arthritis, blocking cadherin-11 prevented cartilage destruction. The next step is to determine whether an agent to block an excess of the molecule has the same beneficial effect in people with rheumatoid arthritis.

In other research, scientists found that a lack of apoptosis (programmed cell death) contributes to a proliferation of cells in the joint lining and the failure to eliminate immune cells that react against self. In animal studies, mice lacking two proteins that mediate the process of apoptosis developed arthritis.

Other NIAMS-funded research has led to a better understanding of autoantibodies and how they cause joint damage. Studying the joints of patients with rheumatoid arthritis, researchers found that anti-CCP and rheumatoid factor antibodies from the joints actually bound to a lot of products associated with joint cartilage and also to histones, intracellular proteins from the cell nucleus that associate with DNA in the formation of chromosomes. The histone deposits may be derived from cells that died and spilled their contents, a result of the disease condition. Furthermore, they found that cartilage in RA is actually coated with histones, regardless of whether RA was active or not. Cartilage from joints of people with osteoarthritis (OA) was not covered in histones. The researchers hypothesize that histones on the cartilage bind with antihistone antibodies, contributing to joint-damaging inflammation in rheumatoid arthritis.

More information on research is available from the following websites:
Hope for the Future
Scientists are making rapid progress in understanding the complexities of rheumatoid arthritis: how and why it develops, why some people get it and others do not, why some people get it more severely than others. Results from research are having an impact today, enabling people with rheumatoid arthritis to remain active in life, family, and work far longer than was possible 20 years ago. There is also hope for tomorrow, as researchers begin to apply new technologies such as stem cell transplantation and novel imaging techniques. (Stem cells have the capacity to differentiate into specific cell types, which gives them the potential to change damaged tissue in which they are placed.) These and other advances will lead to an improved quality of life for people with rheumatoid arthritis.

This article ends the 8-part series on RA.  For more information on rheumatoid arthritis and other musculoskeletal health issues, visit www.niams.hih.gov.