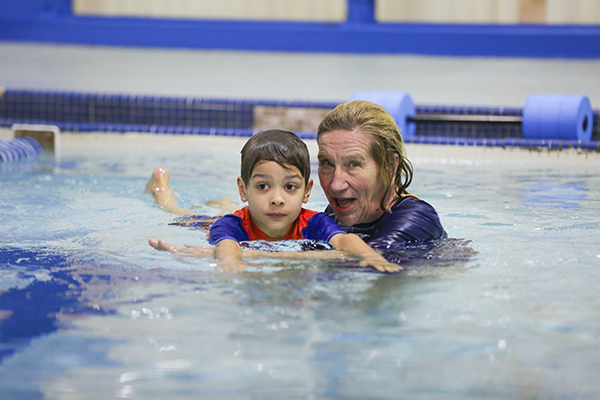 A mere 24 years after the founding of the city of Bloomington in 1831, the YMCA had already found a home within its borders. Subsequently, the YMCA (colloquially known simply as “the Y”) has been a home of sorts to thousands of citizens in McLean County.

In its 165 years of operation, the Bloomington-Normal Y has been a place for not only youth development, but also for encouraging healthy living and social responsibility for people of all ages and every background.

It should then come as no surprise that an organization with such a mission and such history might need room to grow, especially as the city continues to grow around it. So, in a joint capital campaign with Easterseals, the Y has been raising funds to construct a new YMCA facility, with more space, better facilities, and a better ability to bring their core values to the population of McLean County.

Originally from the St. Louis area, BJ built a passion for health and wellness from an early age. After graduating from Missouri State University, he became the fitness director at the Perry Park Center in Perryville, MO.

“After a couple of years, I had the opportunity to accept a position at the Knox County YMCA in Galesburg, IL as a Senior Program Director,” BJ shares. “It was there I found my calling and true passion for helping individuals reach their full potential under a value system similar to my own. This was a tremendous feeling. Soon I learned that the YMCA’s mission and culture were aspirational, idealistic, and intoxicating. There aren’t too many organizations that have the ability to serve all people from birth to 100.”

Five years later, the Christian County YMCA in Taylorville, IL brought BJ in to lead as their Executive Director/CEO until “a wonderful opportunity” opened up at the Bloomington-Normal YMCA back in 2009.

“My 10 years in Bloomington has been one of the best experiences I could have ever imagined,” he says. “The ability to work with creative and innovative staff and volunteers and the opportunity to assist in fulfilling community needs is a great honor.”

Partnership
Significant growth often comes through cooperation and friendship. In order to achieve their vision of the new YMCA, BJ says including Easterseals was a particularly important friendship to make. “We envisioned developing a welcoming, inspiring, and uplifting environment that provides for healthy living, fosters youth development, and unites the entire community in social responsibility,” he explains. “Easterseals’ mission, operating model, and need for similar programming space made them a natural partner.”

The youth developmental programming in particular will see the greatest benefit from this partnership. “Our hope is to cross-pollinate programming in which we blur the lines between typically developing children and non-typically developing children,” BJ adds. “Through innovative and adaptive measures, we want all children feeling empowered and included.”

Just as the smallest sapling cannot grow straight and strong without the right environment in its formative years, proper care and attention in the earliest months and years of development are also crucial to strengthening and fortifying a young child to later brave the storms of adulthood.

“The social, emotional, cognitive, and physical development of our youth are critical,” BJ emphasizes. “Our partnership with Easterseals along with the new venues within the facility will allow us to be much more innovative and creative.”

“Easterseals will lease dedicated space and have access to spaces and venues within the Y such as the warm water therapy pool, gymnasium, community rooms, wellness center, etc.” BJ states. “And the Easterseals suite, will contain best-in-class therapy rooms, a feeding therapy kitchen, and a therapy gym.”

It is no coincidence the new facility will stand on the OSF campus. In a partnership with OSF St Joseph Medical Center, the Y will continue to foster its directive of healthy living and social responsibility.

“OSF and the YMCA will be exploring evidence-based population health management programs in an effort to reduce chronic diseases,” BJ says. “Many of these programs focus on the social determinants of health and get at the root cause of unhealthy behaviors. In addition, the new facility will be accommodating to special populations, thereby providing ease of access.”

The Core
Since the Y established a foothold in McLean County in 1855, its core values have been illustrated in everything they do. The four pillars upon which the Y is based—Caring, Honesty, Respect, and Responsibility—have not only brought growth to them and to the people they serve but they are values that, if embraced, can bring growth, peace, and harmony to every city in which the YMCA finds a home.