Music to Pluck Your Heartstrings 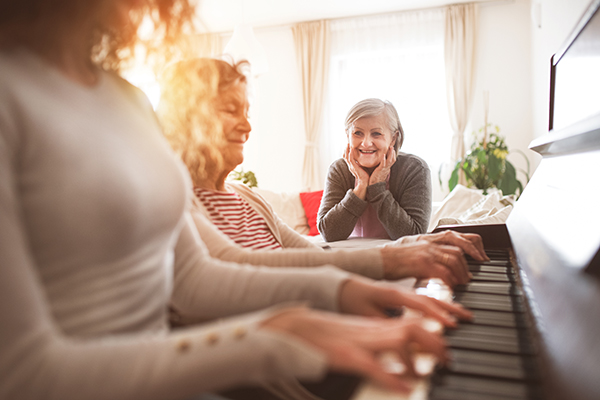 Going back thousands of years, the heart has been directly linked to emotion. Plato, Aristotle, Descartes and other philosophers believed our feelings indeed originated from that vital muscular organ. This was such a popular belief for such a long time the term “heartstring” was only first used in a non-anatomical sense in the 1500s by English poet Edmund Spencer.

Since that time, anything with the power to heavily influence the emotions is said to tug or pluck at one’s heartstrings.

Perhaps more than any other medium, music has the ability to pluck at those heartstrings as if the heart were a musical instrument itself.

His words have since been adapted to say music soothes even savage beasts as well.

The sentiment is, however, the same: “Music can do so many things,” indicates music therapy intern Leah Young. “It can touch many different aspects of an individual, and it’s because of that, that music therapy is very specific and individual based. Music can be used for relaxation. Instrument play can be used to address motor function. You can listen to and play music with others to address social goals. Musical reminders can assist with behavior. A certain song can hold immense meaning for someone and the music therapist can work with it. A big part of music therapy is knowing and working with the music preference of the client. Music therapy can be tailored to an individual’s specific needs and goals to get the best possible outcome.”

Music is also finding its way into hospitals in order to aid patients in the healing process. A recent study conducted in Germany showed how patients who listened to soothing music during their surgery saw a reduced need for pain relievers after surgery than those who had no music playing.

Technicians also employ music as a calming aid for their patients who are undergoing the claustrophobic and noisy confines of an MRI scan.

Eastern medicine has long held onto the healing power of music. According to Psychology Today, “In Chinese medical theory, the five internal organ and meridian systems are believed to have corresponding musical tones, which are used to encourage healing.”

Music, of course, often leads to physical activity such as dancing and other movement. And who doesn’t find themselves singing along to a favorite tune? These forms of personal interaction bring both physical and emotional benefits.

What Makes Your Heart Sing?
A heartwarming film, a spiritual hymn, or standing on the gold medal podium at the Olympics often has the power to bring tears to the eyes. While the experiences may be powerful events in and of themselves, what stirs the emotions in each instance is the music and the connection is makes mentally and emotionally.

Such mental connections are so significant, music is often used with people suffering from Alzheimer’s Disease. The Alzheimer’s Association states, “Studies have shown music may reduce agitation and improve behavioral issues that are common in the middle-stages of the disease. Even in the late stages of Alzheimer's, a person may be able to tap a beat or sing lyrics to a song from childhood. Music provides a way to connect, even after verbal communication has become difficult.”

Research conducted by the Mayo Clinic “suggests that listening to or singing songs can provide emotional and behavioral benefits for people with Alzheimer's disease and other types of dementia. Musical memories are often preserved in Alzheimer's disease because key brain areas linked to musical memory are relatively undamaged by the disease.”

Johns Hopkins Hospital also points out the positive brain boosts music can bring through its power of nostalgia. “Reach for familiar music, especially if it stems from the same time period that you are trying to recall. Listening to the Beatles might bring you back to the first moment you laid eyes on your spouse, for instance.”

Johns Hopkins does say to pay attention to your body regarding how it reacts to different forms of music, however.

Smarter Through Music
Music has long been linked to intelligence as well. “Music is structural, mathematical, and architectural. It’s based on relationships between one note and the next,” says an otolaryngologist at Johns Hopkins. “You may not be aware of it, but your brain has to do a lot of computing to make sense of it.”

This advanced computing is why students who also play an instrument tend to do better in the rest of their academic career than students who do not.

But there is always room for growth through music. Experts suggest there are advantages to opening your mind to new genres of music. Although we tend to gravitate toward the music of our youth and avoid other genres, we should not shy away from expanding our musical horizons. “Listen to what your kids or grandkids listen to,” a Johns Hopkins Medicine study suggests. “New music challenges the brain in a way that old music doesn’t. It might not feel pleasurable at first, but that unfamiliarity forces the brain to struggle to understand the new sound.”

Music Health at Your Fingertips
At no point in human history has music been so accessible. For millennia, the only music available was that which could be performed live. Fortunately, inventions like the phonograph brought music recordings into our homes for the first time. However, the majority of us alive on this earth can remember a time when access to music was still fairly limited.

But wax and vinyl recordings eventually led to magnetic tape and then finally to digital formats of recording. Now, music of all genres and eras can be accessed with a tap of the finger.

Free music apps are available to download on smartphones and computers. Pandora, Spotify, and iHeartRadio allow you to choose your favorite genres and make different playlist choices in order to have music as close as your pocket 24 hours a day. The apps also play bands and artists similar to ones you choose, making it possible to expand your music knowledge with ease. Satellite and regular AM/FM radio also provide constant streams of tunes as well.

Although it may seem music is entering a digital-only realm, that is, fortunately, not true. Vinyl albums have been making a steady comeback for the last 20 years or so. In fact, many bands now release their new albums on multiple formats including vinyl in order to reach those purists of the medium.

The Heart Is an Instrument
Although the suggestion of heartstrings was an early misconception of the anatomy of the human body, the term has remained in use for good reason: The heart is indeed an instrument—one of emotion.

Whether one is remembering a long lost love, connecting to the spiritual, or experiencing a new moment of triumph, music is that common denominator with the power to pluck one’s heartstrings. Indeed, an entire symphony of emotions may be produced if those heartstrings are played in tune. Back to Top
February 05, 2021
Categories:  Feature