The subject matter of this article is of an explicit nature, and may not be suitable for some readers.

Imagine a young man between 18-30 with hopes of one day having a family and children, then suddenly paralyzed by a spinal cord injury. At one time it was believed his only option to conceive was medical intervention. Now he has the option of mental orgasms, to not only help enjoy intercourse more, but to help conceive a child in the comfort of his home, not a medical office. Mental orgasms actually “jump the cut” of spinal injury or full spinal cord cut allowing a full sexual response cycle mentally and physically.

We hear that Lady Gaga reports having mental orgasms. It was a news headline and very titillating, though for those in the know, not that uncommon. Mental orgasms are purposeful orgasms by thought alone, without physical stimulation. This simply means you “think-off,” as stated by a subject of  Gina Ogden,  PhD, LMFT, the acclaimed sex therapist, supervisor and author of "Return to Desire" and other publications. The brain is allowing an orgasm to occur, not because the body is receiving stimulation, but because the brain is deciding to have an orgasm, and then the body responds in an orgasm. It is a lot like a doctor hitting your knee to cause it to kick a little, or you simply kicking your leg yourself — by choice. This does not mean that there is no stimulation occurring in the body, but that it is not the stimulation itself that is driving the orgasm.

Most men can recall having wet dreams in their youth and waking to know that their bodies are practicing for future behavior. Women may not always notice the effects of having an orgasm while sleeping. Either way, a mental orgasm is like having an orgasm at night. It is all built up and created in the mind, but the response is felt throughout the body. 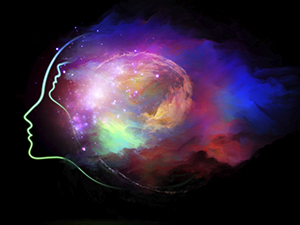 Mental orgasms are not just a party trick. It is a chance for those who have physical disabilities and differences to reclaim their orgasmic abilities. Yes, orgasm can be for fun and enjoyment as well as for procreation. Women with spinal cord cuts, who have been studied “achieving” a mental orgasm while in an MRI machine, have the same reaction in their brains as when they have a masturbatory orgasm. Yes, there is a difference in the brain’s reaction to masturbatory orgasm in women’s brains and partnered sex orgasms — the amygdala is activated with partnered sex and not with masturbation. The amygdala is the emotion center of the brain.

Men with spinal cord cuts — full cuts not just crushes — have reported and shown to have produced an orgasm resulting in ejaculation. This then makes mental orgasms another option for those men to father children. Even more importantly, they can father children without medical intervention that can be expensive and physically invading.

Many people often ask “why say ‘purposeful’, aren’t all orgasms on purpose?” The simple answer to that is, no. There are a variety of intriguing conditions that cause orgasms which are not purposeful or wanted. Orgasm can be created by the brain as part of the precursor to a seizure. This is not a welcome happening to those who are trying to live their lives, but yet seem to orgasm in public at random, often prior to a seizure or during. Also, many women have orgasms during the letdown of milk while breast-feeding or pumping. The chemical release of prolactin is similar in breast-feeding and orgasm; the two mechanisms are quite similar. Breast-feeding also has an effect on the physical tightening of the uterus, which can add to stimulation of genitals and sexual response and may be part of the stimulus for breast-feeding orgasms, although it is not entirely clear. So breastfeeding-induced orgasms are probably more physically induced, although sometimes just the cry of a baby can cause the prolactin release and letdown.

The benefits of mental orgasms are known to be equal with those of physically-induced orgasms. The defining reactions of an increase of pain threshold, pupil dilation, and decrease in muscle tension can all occur; including the more well-known feelings of relaxation, overall ecstatic pleasure, and an increase in dopamine release (the joy chemical). It is suspected that the same decrease in carcinogens, an increase in cardiac health, and the plethora of other benefits from physically-induced orgasms would also be expected, though this has not yet been studied.

Whether it is Lady Gaga titillating the TMZ viewers or a man with a spinal cord cut trying to start a family, mental orgasms are just another sexual option. As more and more people contact me telling me about their mental orgasms — how they first started, what they think about them, and what they use them for — the less rare and more simply recognized mental orgasms seem to be.

Dr. Chelsie is in private practice in the Ocotillo area of Chandler, Arizona. Find out more at www.drchelsie.com or phone 480-855-4009 and like her on Facebook.