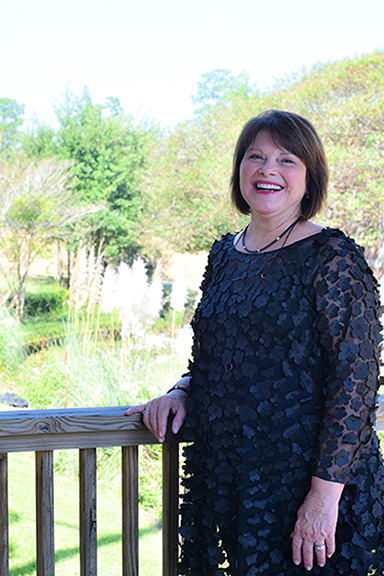 Anyone watching Becky Oliver hike up the lush green mountains of Ireland would see a youthful, vivacious woman working through her bucket list. While that perception is true, most may not expect that she also takes daily medication to keep her cancer in check. Becky suffers from stage 4 metastatic breast cancer, which is currently incurable.

“It turned out that I had breast cancer that had spread to my liver. It was in a couple of lymph nodes as well. That made it stage 4. It made it metastatic. Metastatic means that it has spread through your blood stream from one place to another place in your body, and developed a tumor there. It is the most severe form of breast cancer. I was shocked. I had never missed a mammogram. It’s not that I did anything wrong; it just happened,” Becky explained.

After receiving her diagnosis at the Forrest General Cancer Center, John “Bo” Hrom, MD, started Becky on hormonal therapy in conjunction with a new medication called Ibrance, which had only been FDA approved the previous year and was not yet available in Mississippi. This medication works by inhibiting kinases, a type of protein that occurs naturally in the body. According to Insight magazine, “Certain ones, the cyclin-dependent kinases (CDKs) 4 and 6, can cause breast cancer cells to multiply. Palbociclib (Ibrance) and other CDK4/6 inhibitors work by interrupting that process, killing the cancer cells or stopping them from growing.” Other than some minor fatigue and a lowered white blood cell count, both of which are common with this treatment option, Becky has not experienced the negative side effects many people associate with cancer. Having a lower-than-normal white blood cell count effects the immune system, making patients more vulnerable to infections and other illnesses.
Becky said, “Other than that (low white blood cell count and fatigue), I did not have surgery. I did not have radiation, and I did not have regular chemo. The only thing I’ve done is take the Ibrance and Famara. It’s called targeted therapy, and it basically puts the brakes on the cancer cells.”

Three months after starting treatment, the tumors in her breast and liver disappeared, but that does not mean she no longer has cancer. Clinical trials show that patients were able to remain on this combination of medicine for a median of 24.8 months with no signs of cancer progression. Becky has been treated successfully with this combination for 30 months, and she remains optimistic.

“The statistics are very grim, but they’ve come a long way with medicine. We’re treating it, and I just want to live into the cure. So much is being done in the way of research for breast cancer medicine, but not with metastatic,” said Becky. She continued, “Nobody knows what “metastatic” means. When you say metastatic, they don’t understand. If you say stage 4, they kind of get a sad look on their face; they kind of understand stage 4. It’s hard. Even family members don’t understand it.”

Tragically, according to the American Cancer Society, “only seven percent of all breast cancer research funding is spent on Stage IV.” This is why Becky is so concerned about raising awareness of this type of cancer and people, like herself, who will spend the rest of their lives in treatment of some kind. It was this lack of awareness from family and friends that led Kent Oliver, Becky’s youngest son, to donate a portion of funds generated from 2018’s Laughs 4 Life to stage 4 breast cancer research. Kent started Laughs 4 Life three years ago after being diagnosed with multiple myeloma, which is also considered treatable but incurable. A portion of the funds raised through Laughs 4 Life to the ongoing research program at the Forrest General Cancer Center.

The Cancer Center, in partnership with Hattiesburg Clinic Hematology/Oncology, has an extensive clinical trial program that has grown to be one of the largest in the state of Mississippi. Clinical trials are research studies that allow physicians to find new ways to improve treatments and quality of life for patients who have cancer. Becky says this program has offered hope for herself and many others.

“This program is extremely important; it gives us hope. It gives me hope and others, too. And knowing that he is conducting some of these clinical trials gives you confidence and the feeling that someone is in the arena helping you in every way. It gives me reassurance that I’m doing the right thing at the right place,” said Becky.

In addition to being a supporter of the clinical trials program, Becky also participates in the Metastatic Breast Cancer Project. This research program is led by the Broad Institute of MIT and Harvard and depends on patients voluntarily coming forward to share their records and submit samples for study.

When she’s not busy raising awareness and advocating for other cancer patients, Becky spends her time with her family and working through her bucket list, which involves plenty of travel. She has formed a small support group with two other women, who also have stage 4 metastatic breast cancer. The women currently all share similar treatment plans and have been able to support each other through all of the triumphs and setbacks they’ve encountered. Becky says she wants other patients to know that physicians and researchers are working diligently and have come a long way in developing advance treatment options.

She said, “It doesn’t have to scare you so bad. They’re coming a long way. There’s great progress being made, and I hope that it will continue. It scares you out of your wits, but then again, nobody’s guaranteed tomorrow. I am touched to have so many people praying for me, and I truly believe in the power of prayer and the difference that has made in my life. You’ve just got to have faith. I don’t want people to see me and think, ‘Oh, there’s a poor lady with cancer.’  I want them to say, ‘oh, there’s that lady who’s working on her bucket list! She’s traveling; she’s going and doing, and having fun."

Becky and Bill, her husband, are both excited about The Healing Garden, which will be named in their honor and is anticipated to open in the Summer 2019. The Healing Garden at Forrest General's Cancer Center will offer patients, loved ones, and visitors a quiet, outdoor space away from treatment areas. The Garden will be open to all, every day from dawn to dusk. Its purpose is to help reduce the stresses of illness and hospitalization by encouraging calm, comfort, and relaxation.

“The Foundation board members agreed that naming the garden after Becky and Bill Oliver was most appropriate because of their outstanding contributions to our community. Approving the construction of the Cancer Center was actually the first thing Mr. Oliver did as president and CEO of Forrest General. We wanted to honor them in a way that would be very meaningful, and with their ties to the Cancer Center, this seemed like a great way to do that,” said Martha Dearman, executive director, Forrest General Healthcare Foundation.