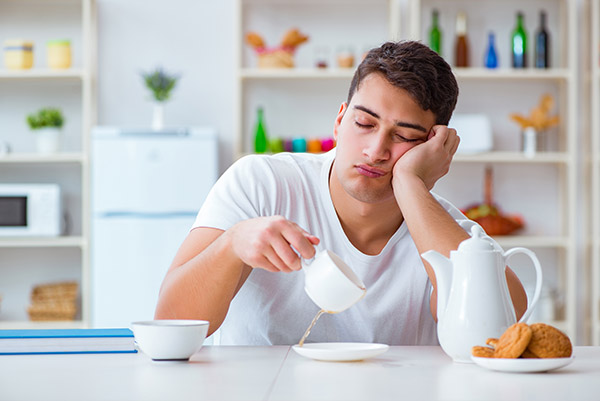 Our lives are busy even with the new technologies available today to save us time, we often still try to squeeze more time into our day. Cutting our sleep time is one of the easiest ways to give our self an extra hour or more in a day. We get up an hour or two earlier or stay up half the night to finish a project, and cut our sleep time to just a few hours. After all… its only sleep. Sleep is over-rated and besides, “I’ll catch up tomorrow night or sleep in on my day off!”

Can You “Catch-up” on Lost Sleep?
Despite popular belief, you can’t regain or catch up on “lost” sleep by sleeping more at another time. Being sleep deprived means you accumulate a sleep debt that is impossible to “repay” as it gets larger. In addition, long-term sleep deprivation puts you at risk for health problems and may impair your safety and work performance.

About one of every three adults regularly gets less than seven hours of sleep a night. Over time, lack of sleep can lead to changes in metabolism. Sleep deprivation has been linked to obesity, high blood pressure, negative mood and behavior, decreased productivity at work, and safety issues in the home, on the job, and on the road. Catching up on sleep may help to reduce daytime sleepiness or drowsiness, but it does not reverse the effects of not getting enough sleep or enough quality sleep each night.

Some people try to make up for a lack of sleep by sleeping more on their days off but catching up on sleep doesn’t reverse damage to the body caused by sleep deprivation, according to a new study. In fact, so-called recovery sleep may make some things worse.

A research team studied the catching up on sleep strategy for two weeks in 36 men and women. After three nights of normal sleep, the participants were split into three groups.

Those who had only five hours of sleep a night gained about 3 pounds on average during the study. They also had a 13 percent decrease in a key measure of metabolism called insulin sensitivity. Insulin sensitivity is the body’s ability to use insulin properly and control blood sugar levels.

Those who had recovery sleep gained about 3 pounds but had a 27 percent decrease in insulin sensitivity. Their natural body rhythms were also disrupted. They were more likely to wake up during the nights following the period of recovery sleep.

“Catch-up sleep does not appear to be an effective strategy to reverse sleep loss-induced disruptions of metabolism,” says Dr. Kenneth Wright, Jr., who led the study at the University of Colorado.

What Is Sleep?
Sleep is a complex biological process that helps people process new information, stay healthy, and re-energize. Periods of sleep and wakefulness are part of how our bodies function.

Although you are resting while you sleep, your brain remains highly active. Sleep consists of different stages that repeat several times each night. During sleep, the brain cycles through two distinct phases: rapid eye movement (REM) sleep and non-REM sleep. Not completing the full sleep process can stress your body.

Why Is Sleep Important?
Each sleep phase and stage is important to ensure that the mind and body are completely rested. Certain stages help you feel rested and energetic the next day, while other stages help you learn information and form memories. Sleep is important in the function of your body’s other systems, such as your metabolism and immune system. Sleep may also help your body clear toxins from your brain that build up while you were awake.

Not getting enough or enough quality sleep contributes, in the short term, to problems with learning and processing information, and it can have a harmful effect on long-term health and well-being.

Sleep affects how well you do your daily tasks, your mood, and your health in the following ways:
How Does Inadequate Sleep Affect Health?
Inadequate sleep—such as not sleeping long enough overall or having poor quality sleep—affects both how we feel and how we function. Short-term effects can include drowsiness or sleepiness, irritability, reduced alertness, poor motor skills, and attention problems.

Inadequate sleep over a longer period of time can affect how the body functions. For example:
Although the amount of sleep you get each day is important, other aspects of your sleep also contribute to your health and well-being. Good sleep quality is also essential. Signs of poor sleep quality include not feeling rested even after getting enough sleep, repeatedly waking up during the night, and experiencing symptoms of sleep disorders (such as snoring or gasping for air). Improving sleep quality may be helped by better sleep habits or being diagnosed and treated for any sleep disorder you may have. Back to Top
March 07, 2020
Categories:  Feature