Imaginative Play is Important for Children 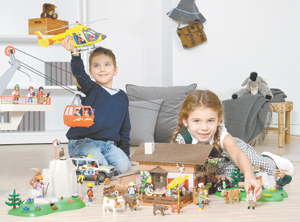 It can be all too easy to resort to television and other passive entertainment when you’re looking to fill a long afternoon with the kids. But encouraging your kids to use their imaginations is a much better use of their time.

Whether you’re playing with the little ones, or letting them do their own thing, here are some great suggestions for creative play:

Sock Puppet Play
Keep old socks on hand and art supplies for that next rainy day. Permanent markers, googly eyes, pipe cleaners, sparkles, glue, and yarn can turn some regular old socks into an entire cast of characters. You can even let the kids design the stage. Then have them write a script and rehearse. Finally, get the video recorder because it’s show time!

Talent Show
A talent show is a great way to showcase everyone’s unique abilities. Give everyone five to 10 minutes to dance, sing, twirl a baton, perform comedy, or whatever else he or she does best.

You can make the event even more special by inviting your children’s friends over to participate and their parents to be part of the audience. Set up the backyard or living room like it’s a real theater.

Creative Toys
Stock the playroom with toys that go above and beyond merely entertaining kids. They should encourage adventure and the use of one’s imagination. For example, PLAYMOBIL’s realistic play sets (www.playmobil.us) spark creativity and can transport kids anywhere — from a knight’s tournament to a pirate ship to a princess island to a pony pasture.

This year, there are opportunities for kids to get even more imaginative. In celebration of the company’s 40th anniversary, the brand has dispatched its “Tim the Traveler” figure to embark on sightseeing adventures all over the world, by sending him to be hosted by members of its worldwide PLAYMOBIL Collectors Club. This special program engages children and collectors of all generations as they host Tim, showing him around their hometowns and photographing him as he discovers exciting sights.

To follow Tim on his “PLAYMOBIL Around the World” tour, visit 40.playmobil.com. To learn about the PLAYMOBIL Collectors Club, visit www.PCC.pm.

Start a “Band”
Make an afternoon project of creating instruments with stuff found around the house, such as guitars made out of empty cereal boxes and rubber bands, and maracas made out of dried beans and cans. Kids can “cover” their favorite songs or even write their own.

With a little creativity, and the right toys and supplies, you can avoid letting playtime be downtime for your children’s minds.