Giving Patients a Reason to Smile 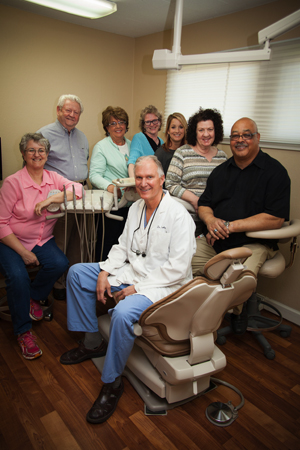 Dr. Emil Verban, Jr. has seen a lot of smiles in his more than 30 years as a dentist. Many of those smiles he has actually created for patients who, for reasons as individual as the patients themselves, often don’t feel like smiling before sitting in a chair at his practice, McLean County Dental, on East Washington Street in Bloomington. And, not because they have dentophobia (fear of dental care) or dental anxiety, but because they simply don’t like their teeth or are missing teeth or are about to lose their teeth due to disease or poor dental care.

Dr. Verban has become very proficient over the past more than two decades at helping these patients smile again through the use of dental implants.

While still maintaining a thriving general dentistry practice, Dr. Verban has become very knowledgeable and skilled in the technology and artistry of implants. “Technology has made it [implants] more predictable,” he explains. “Advances such as 3-D X-ray have made placement more accurate and less risky, so you can plan and execute the procedure better.”

In addition, changes and improvements in design and technology now allow for tooth extraction and placement of the implant to take place on the same day, cutting down on some of the time it takes to complete the process. “In the late 80s and 90s when implants were still a new option, we would extract a tooth or teeth, wait six months for healing, insert the implants, wait another six months for healing, and then start the restoration process,” so patients had to wait a minimum of a year or so to get through the entire procedure.

Dr. Verban has also contributed to the technology that enables dental implants to be an optimal choice for patients. Utilizing his own experience and innovation, he designed and patented a special drill bit that allows for greater accuracy in placing the implants in a patient’s mouth. Not only does this improve the outcome for the implant process, it is safer and more comfortable for the patient — especially those with dental anxiety.

Taking the Time to Do it Right
However, dental implants still require time; after all, when you’re designing something as important as a person’s smile, you want to do it right.

“We may have four to five planning appointments prior to any procedure,” says Dr. Verban. Part of the planning includes taking 3D X-rays and a cone beam CT scan, which uses less radiation than a typical CT scan. These X-rays and images are used to plan and assess the bone, finding out as much information as possible to make the best decision for the patient regarding the type of implant they need.

Dental implants can solve a variety of problems for patients, from replacing a single tooth, replacing several consecutive teeth, or replacing all teeth. The procedure and technology is basically the same:
“Really what we do is reverse engineering,” says Dr. Verban regarding the process. “We start with what we want the final outcome to look like as far as the smile, the amount of tooth show, and other aesthetic and functional considerations, then we work backwards to place the implants.”

Comprehensive Care
Taking a patient from start to finish through a dental implant procedure is not all that common. “There is a surgical phase in which teeth are extracted and the implant placed in the mouth, as well as a restorative phase during [which] the crowns are designed and inserted,” explains Dr. Verban. He estimates that fewer than 10 percent of all general dentists do both parts, which means patients often have to go to different offices, see different specialists, and deal with two sets of billing and insurance. “Our patients only have to come to one place — our office — for treatment.”

This comprehensive care benefits the patient in many ways, including assuring that there is no miscommunication between providers about the unique details of each patient’s case. As the provider, this also gives Dr. Verban more control of the outcome. “For the patient’s smile to look a certain way, the foundation has to be right — being actively involved in the planning, surgical, and restorative phases provides details and information that may be missed or misunderstood if it had to be relayed to another provider.”

Ken Mattingly readily admits that he “didn’t take care of … [his] teeth when [he] was younger.” As a result he has undergone a significant amount of dental work in his 81 years. Of all the work he’s had, he is most excited, and impressed, with dental implants.

While serving in the Army in Korea as a young man, Ken took a hit to the mouth that loosened some teeth and damaged the nerves. As he continued to age, his teeth started to turn dark due to the nerve damage. He had a partial plate that had been anchored to other teeth, and as these teeth began to deteriorate, Dr. Verban suggested considering other options, specifically dental implants.

Once he had undergone the process of getting the implants — taking the old teeth out, putting the implant into the bone, allowing it to heal, then getting the permanent “tooth” portion inserted — he was amazed with the result. “It looks a lot better — like my natural teeth, and is 100 percent better than plates or dentures,” he says. Plus, along with the cosmetic improvement, he also appreciates that no food gets into or under his teeth to cause discomfort. “I wish I would have done it long ago,” he says of the dental implants.

Another patient, John Lawrence, found Dr. Verban through the recommendation of another dental specialist. He needed, as he explains, “someone who could help solve some problems that hadn’t been solved in other ways” regarding his teeth. His case involved needing to replace old, fixed bridges. Dr. Verban did so with a total of six implants. “I sat down at 2:00 and got up at 6:30 — and had six post implants and a temporary set of teeth,” and even more significantly, “absolutely no pain at any point.”

John appreciates Dr. Verban’s hands-on approach — “he does all of the patient contact; that appeals to me a great deal.” The overall care is “superb — how they approach the patient and the detail they go to” is wonderful. “When you can have [the teeth in] a whole lower jaw replaced without discomfort, that is something,” he says. Even more, having perfect teeth is like “getting a new life.”

Similarly, Jackie Gehlbach had recovered from some major health issues when she decided to celebrate by focusing on her long-ignored teeth. “I neglected my teeth during treatment, so I had missing and moving teeth, especially in the front.” As a sales representative, she felt it was important to look good when she interacted with her customers, but the state of her teeth made her feel “like I looked awful.” Aesthetics aside, her teeth were also causing problems for her when she ate anything other than soft foods.

When she first met with Dr. Verban, she knew nothing about implants. Dr. Verban and his staff were very compassionate and worked with her to understand what she wanted as well as explained the overall process it would take to get her to a restored, and beautiful, smile. “He was very upfront about the fact that this would be a journey,” she says. The process included removing most of her remaining teeth, inserting the implants, allowing her gums to heal, and monitoring the changes in her mouth with regular impressions and ongoing conversation. “Until my mouth was finished changing, we had to go step-by-step.”

The entire process took over a year, but the end result, “was all just perfect,” largely because Dr. Verban worked to make Jackie’s smile truly hers: “It’s what my natural teeth would look like,” she says. Jackie feels much more confident when interacting with others simply because she knows her smile is now an asset. “It changed my life,” she explains. “Someone recently said to me, ‘You probably hear this all the time, but you have the most beautiful teeth.’ The truth was, no, I hadn’t heard that at all until I had dental implants.”

Rick Rutledge lost a front tooth just over a year ago. Having just relocated to Bloomington-Normal, he asked his children for a recommendation for a dentist. They sent him to Dr. Verban, who upon examining Rick’s teeth, shared the unfortunate news that Rick had gum disease and would likely end up losing all his teeth. In the end, however, Rick decided to proactively have all his upper teeth removed in order to place an implant for a full upper support for removable overdenture. Although the nine months of waiting for his mouth to heal with a temporary set of teeth was not fun, when it was all over, Rick was very pleased. “It’s a great thing,” he says. “I couldn’t handle a plate because I have a bad gag reflex, but with this, I can do everything as if they are my natural teeth.”

Dr. Verban believes dental implants will continue to become more prevalent as an option for a third set of teeth as patients have need. “For patients who have struggled with problems with their own teeth and/or had less than ideal experiences with options such as partial plates and dentures, dental implants can be a revolutionary change,” he says. “It’s very gratifying to help people who, for part of their life — and for some it’s been a very long part — have not wanted to smile simply because they didn’t like their teeth.” And giving people a reason to smile makes every day a good day.