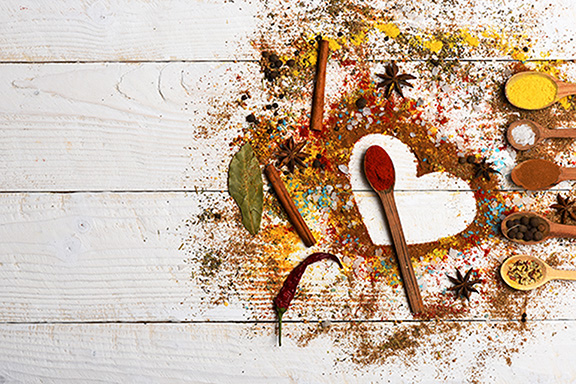 For most of us, the holiday season involves at least a little bit of excess and indulgence, and we often measure our dietary success on how well we resist eating the holiday goodies that propagate in every breakroom, buffet, and holiday tins that abound this time of year. Rich bases, creamy frostings, and those traditional butter-based baked goods are probably the worst culprits of the holiday spread, but there is a surprising upside to all the traditional flavors of the season: spices.  Let’s take a look at some of the most common spices used in holiday cooking that may give you a twinge of nostalgia along with surprisingly healthy benefits.

Allspice
The rather ambitious sounding name of allspice comes from the fact that it tastes like a lightly peppered blend of nutmeg, cloves, and cinnamon, all wrapped in a warming aroma. The Caribbean spice is used both whole and, more commonly, ground to add a savory, warm flavor to dishes. The general rule seems to be that, if you’re using ground allspice, you’re going to be baking with it, while the whole-berries variety goes into solutions like mulled beverages and brines. Either way, it has an incredible shelf life if stored whole and ground in a peppermill on demand. The most recognizable uses of allspice are the spicy-sweet flavors in gingerbread, the savory undertones in pecan pies and fruitcake, and the complex warmth of jerk and barbeque dry rubs.

Allspice has actually been a component in folk remedies for ages, being used to alleviate muscle cramping and spasms. Allspice is extremely rich in the antioxidant eugenol, which is known to fight the reproduction of cancerous cells and even combat tumors directly. Eugenol is also useful as a local antiseptic and anesthetic. Allspice contains gallic acid, an antioxidant known for its cardiovascular benefits. Ericifolin found within the spice is known to be especially aggressive to the cells in prostate cancers.

Cinnamon
Cinnamon is actually the aromatic inner-edge of the bark of a group of southeast-Asian trees. The delicate sweetness of cinnamon is well known for making lively flavors in gingerbread and mulled beverages, its warmth is an especially welcome addition to tart fruits and complex rubs for meats. Like allspice, cinnamon comes in ground and whole varieties, with the whole sticks of cinnamon providing a longer shelf life.

Cinnamon has a long list of benefits. The anti-microbial effects of cinnamon are likely what has made it a staple in anti-cold home remedies for centuries. Most prominently, even small amounts of the spice can help lower “bad” LDL cholesterol and balance blood sugar as well as lower inflammation in the circulatory system. Like allspice, cinnamon also contains the cancer-fighting antioxidant eugenol.

Cloves
Cloves are dried, immature flower buds from a breed of evergreen trees native to islands in the Indian Ocean. The buds may be small, but they pack a potent punch in terms of flavor: a semi-sweet, bitter flavor with a strong warmth. The pungent flavor is often tempered by bright tones like honey and citrus, earthy flavors such as tomatoes and beets, or as a compliment to savory meats. Any way that they’re used, cloves aren’t something your guests are going to like biting into, so you’ll want to remove them before serving your dish.

The astringent flavor of cloves is a result of the presence of eugenol and gallic acid in high concentration in the spice, making it another spice prime for cancer fighting.  Concentrated clove oil is used as a natural pain reliever and anti-inflammatory, as well as being an ingredient in many soaps and fragrances.

Nutmeg
Contrary to appearances and nomenclature, nutmeg is not a nut, but the dried seed of the Myristica fragrans evergreen tree in Indonesia. Nutmeg actually produces two valued spices: mace is ground from the shell/husk of the seed and nutmeg made from the powdered seed within. A surprisingly sweet spice, nutmeg has a warm, musky flavor that pairs nicely with starchy, hearty winter vegetables and dark, fatty meats. Nutmeg seems to play well with anything dairy; a sprinkle will add some pizzazz to your whipped toppings or extra richness and depth to your eggnog and hot cocoa.

Nutmeg also has anti-cancer properties, specifically those that combat intestinal cancers. The oils within nutmeg are also good for the belly as they stimulate the production of digestive enzymes, soothing upset and helping to restore regularity. The high mineral content of nutmeg makes it effective in regulating blood pressure, and the phytonutrients present increase circulation to the brain. Nutmeg is a mild anti-inflammatory, and it can be used to induce drowsiness — a perfect compliment to help you sleep off the aches of seasonal maladies.

Peppermint
It’s sometimes forgotten that peppermint is a spice, given its most common use is in sugary, syrupy sweet candies and lattes. The minty-cool leaves with a bold, peppery bite come from a hybridized mint plant common to Europe and the Middle East. Obviously, some of the best uses of peppermint are when it is contrasted with the sweetness of desserts and candies or the savor of chocolate, but peppermint makes an excellent calming tea.

Peppermint’s high content of menthol is responsible for its famous tummy-taming properties and its distinctive cool-spiciness. Menthol-rich plants have long been used to alleviate stomach upset in the form of spasms, IBS, cramps, nausea, and the symptoms of indigestion. Although science has yet to validate peppermint’s effectiveness against nasal congestion and other symptoms of the common cold, many find temporary relief in the form of fragrant peppermint tea or essential oil. Others find that it is also effective in reducing the severity of headaches, and that the bracing coolness is an energizing and refreshing alternative to caffeine.

While these flavors of the season are common in our Christmas delights, they by no means should be confined to the holiday season.  Of course, even healthy spices won’t magically make an unhealthy dish into a healthy one, but learning to use these and many other spices as seasonings may help you establish a healthier approach to cooking year round. Get creative; there's a whole world of spices and flavors out there to give your cooking a healthy boost. Back to Top
December 02, 2018