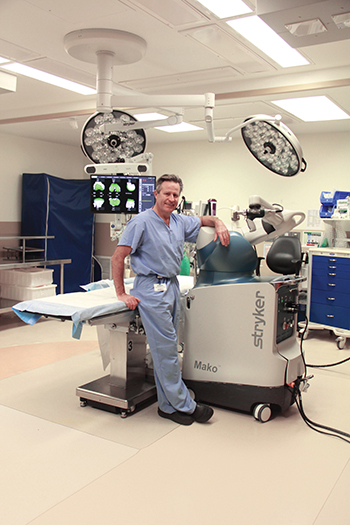 With every one of its myriad systems and joints working in perfect order the human body can be every bit an instrument of beauty as a well-crafted violin. The scope of its ability and beauty of its movement is, like music, nothing short of artistic.

Age and use have a tendency to wear down both instruments of music like the violin or instruments of movement like our bodies. Sometimes the wear can be so extensive a restoration of sorts is necessary in order to bring an instrument back to its proper artistic function.

On the Increase
One of the most common joints in need of restoration is the knee. Over 700,000 total knee replacement surgeries are performed in the United States every year.

Years of use can lead to arthritis, limited function, and even misalignment of the joint, which can then lead to even more problems. Actually replacing the joint, however, is an action taken only after more conservative measures fail to provide the relief a person needs. Exercise, weight loss, medication, braces, topical modalities, physical therapy, and injections are among those methods used, says Dr. Thomas Mulvey of Midwest Orthopaedic Center.

Options like exercise can be a bit of a catch-22, explains Dr. Mulvey, a specialist in knee and hip replacements. A person who experiences severe pain and limited function in their knee often finds him or herself avoiding activity altogether. “As the arthritis gets worse, often surgical treatment is indicated and that’s the only treatment that’s going to help them. Replacing the knee will give us the opportunity to get rid of the arthritis by resurfacing the joint and realigning their leg so their function improves, their quality of life returns, and their pain goes away.”

Knee replacement surgeries are continuously on the increase due mostly to a larger aging population, he explains. “People are also living longer and living healthier and more active lifestyles. They’re also expecting to be able to do more things,” he says, “so the demand to keep people more pain free, more mobile, and more active has grown substantially in the past couple of decades.”

Evolution of Knee Replacement
With over 50 years of history, knee replacement surgery is not a new procedure. There has been significant room for improvement, however, both in how the procedure can be performed and in the actual implant technology itself.

“It’s gone through different steps in the way we actually perform the procedure itself, using different types of instruments,” Dr. Mulvey states. “However, they have always had some limitation. Technology has progressed to the point where we now use more modern technology when replacing knees, specifically the Mako Robotic-Arm Surgery System, which allows us to do an even better job.”

Three Goals
Because the knee is a moving, flexible joint, replacing a knee means replacing or resurfacing more than one thing. For knee replacement, there are four parts to the new prosthetic joint: a femur component, a tibia component, a polyethylene liner, and a patella component.

“The goals of the reconstruction are threefold,” Dr. Mulvey begins. “First, we’re going to replace or resurface the worn-out articular surfaces. The second goal is to realign the extremity. We need to properly establish the position and alignment of the leg so that it is back into its normal range of position.”

Misalignment of the joint and deformation of the extremities are often associated with arthritic joints, so when bones of the joint are being replaced with implants, a realignment to a pre-arthritic state is sought.

“The third goal is properly rebalancing or tensioning the ligaments that surround the knee,” the doctor concludes. “There’s a certain biomechanical axis or alignment that the knee works best in. We need to reestablish that balance of the ligament, which is just as important as realigning the extremity. If you don’t do all of these steps then there’s potential for a suboptimal outcome. The Mako procedure allows us a much greater ability to accomplish all of these goals.” Locally, the Mako technology is only performed at Midwest Orthopaedic Hospital at Unity Point Health - Proctor.

Mako Total Knee Application
Historically, a surgeon used myriad instruments to perform a knee replacement. Beginning with x-rays of the joint, a surgeon would then have to measure how much bone to resect, or cut off. The angles of the resection, the size of the implants, and the positioning of the implant would have to be determined. Even with the improvement of instruments over the decades, there was an inconsistency in meeting the aforementioned goals.

“Predictable outcomes depend on reproducible accuracy,” Dr. Mulvey states. “Standard instruments have limitations with accomplishing that. There’s a human error element. What Mako does is reduce human error and gives us significantly more information so that all three of those goals are met more reliably, reproducibly, and accurately.”

The first improvement is made pre-operatively. Mako Technology uses a CT (computerized tomography) scan of the patient’s lower extremity—from the hip to the knee. That scan is then formatted and a 3D model is constructed of that specific patient’s leg.

Everything is taken into account: the wear of the joint, the severity of the misalignment, any specific deformity of the joint, old injuries to the joint, even old implants that could potentially be in the way.

That patient-specific customized information is then uploaded into the robot, aiding the surgeon in creating a far more detailed surgical plan than what could be done with standard instruments.

“We have all that information,” Dr. Mulvey continues, “and then intra-operatively we can take additional measurements and fine-tune each person’s knee replacements based on what specific needs they have. That is where Mako is separated from standard instruments because of the ability to fine-tune things to such a detailed level before any cuts are made in the bone. Historically, if you didn’t like it, you had to go back and re-cut or release for tissues. With Mako we’re not guessing. When we make these bone cuts, the alignment, the sizes, the implant is correct, the position is optimal and ideal, the balance and the stability are good and the limb is properly aligned.”

In the Right Hands
Just as when using computerized tools to reconstruct and restore a worn-out violin and an electronic tuner to apply the right tension to the strings, when replacing a knee, the work itself must still be done by the surgeon.

“The arm does not perform the surgery nor does it make any decisions, nor move in any directions without me controlling it,” Dr. Mulvey points out. “The Mako System gives me specific patient detailed information so I can fine-tune and make adjustments so I can optimally perform each patient’s knee replacement.”

Put simply, the Mako System is an instrument, not the practitioner, which is important. Even a Stradivarius violin, in the wrong hands, will sound awful.

In the right hands, however, there are a plethora of benefits to using Mako Technology. Some patients with previous hardware in their legs can be worked on, more accurate cuts can be made, and patients often report lower post-op pain and better limb function.

“It’s more accurate and safer,” the doctor adds. “There are a lot of tissues surrounding the joint we don’t want to injure: tendons, ligaments, nerves, arteries. Because of the pre-op CT scan, Mako knows the exact shape and size of that person’s bone. So when I’m controlling the saw, if I try to go outside of that bony boundary, the robot will stop.”

“Plus the procedure is easier on me,” Dr. Mulvey chuckles. “It’s ergonomically easier for me to perform compared to standard instruments. It’s actually more fun. We surgeons like to enjoy what we do; the more you enjoy things, the better you are at them.”

There is also the financial advantage. A Mako-assisted knee replacement is not, in any way, more expensive for the patient. In fact, the overall long-term cost for the patient may be less.

“If patients are healing quicker, their hospital stays are shorter,” he explains. “We’re even sending some patients home the same day. If they’re healing quicker they need less physical therapy and take less pain medication.”

A Better Musician
All the skills of a musical virtuoso are lost when handed a broken, out-of-tune instrument. With the right instrument in hand, however, a musician and instrument together can be lifted to new heights.

For Dr. Mulvey, the Mako System is that right instrument. “I use the Mako because I want the best outcome for my patient,” he says. “I’ve replaced thousands of knees over the last 20-some years. I’m experienced and have good skills, but now Mako allows me to use those experiences and skills to elevate my patients to new levels.”