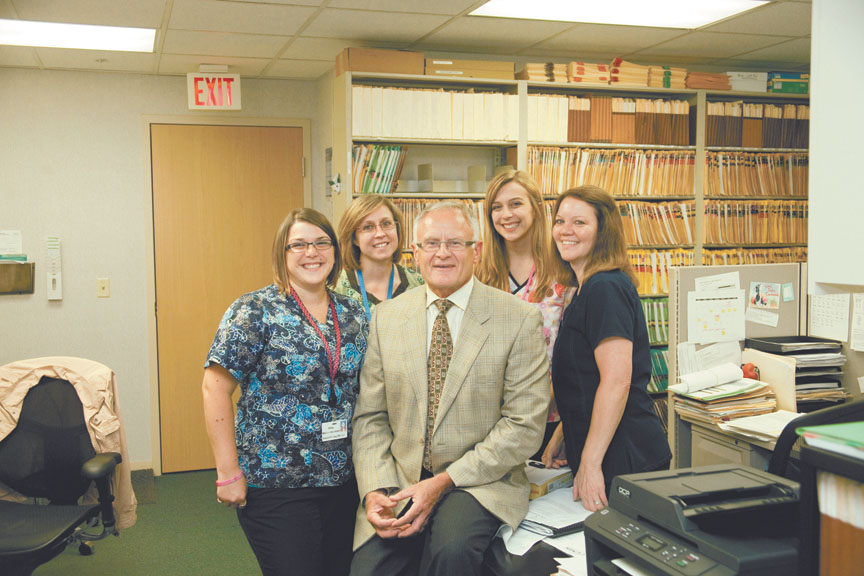 
When Dr. Pegg is mentioned, admittedly concussions and football may be the first things that spring to mind. However, the true depths of Dr. Pegg’s expertise, practice, and person sometimes get buried beneath an avalanche of athletics-induced head injuries. Indeed, just as there is more to a concussion than just a knock on the head, there is a great deal more to Dr. Pegg than just concussion management.

He and his wife, Carol, both family-oriented, settled into the Bloomington area almost 30 years ago, raising five children, two of which have also entered into careers in medicine. But his interests do not stop within the medical field. A lover of auto racing, fishing, and skiing, he also greatly enjoys spending time with his three grandchildren. It’s not uncommon for him to walk out with a patient talking about anything from lawnmowers to fishing holes.

Community Interest
To Dr. Pegg, making the decision to raise his family in the Bloomington-Normal area meant supporting the community. He has sponsored and actively participated in many charitable functions such as OSF St. Joseph Medical Center fundraising events, St. Jude golf outings, and local theatre and school athletic events. Dr. Pegg has also provided valuable information to the community by giving talks to local groups such as Kiwanis, the Alzheimer’s Association, and the Multiple Sclerosis Society.

With concussion management being of particular interest to him, Dr. Pegg has assisted area schools by giving concussion talks to coaches and athletic organizations. He has worked with local certified athletic trainers to develop concussion protocol and has provided baseline ImPACT™ testing and concussion management for their athletes. Dr. Pegg is the team neurologist for Illinois State Athletics,
Illinois Wesleyan Athletics, Bloomington Thunder Junior Hockey and Bloomington Edge professional indoor Football.

What Makes Him Tick
Dr. Pegg loves a challenge. Neurology is a complex puzzle and it was the challenge that intrigued Dr. Pegg and led him to become a board-certified neurologist. It’s not always black and white. The brain and the spinal cord are a complicated crisscross of “wiring” going back and forth throughout the central nervous system. Having knowledge of this circuitry allows a neurologist to put together the pieces of the puzzle (the patient’s complaints/symptoms) and make the diagnosis.

With such an intricate and often convoluted puzzle as the nervous system, the problems and eventual diagnoses logically range quite widely — from a pinched nerve to multiple sclerosis; ergo, solving the puzzle can be very gratifying. In one instance, locating and placing that crucial puzzle piece enabled Dr. Pegg to help a middle-aged teacher who was having occasional bed-wetting at night. The teacher was elated to find out he was not “weird.” “He had an undiagnosed seizure disorder that we were able to control with medication,” Dr. Pegg explains.

Another patient had complained of having crippling sinus headaches her entire life. “Unraveling her ‘puzzle’ led me to a diagnosis of migraine.” Again, providing the correct medication controlled the headaches so they no longer impacted her life in such an incapacitating manner.

In a town that truly loves its sports, diagnosing and managing concussion was, of course, a necessary challenge. Embracing that challenge led Dr. Pegg to ImPACT (Immediate Post-Concussion Assessment and Cognitive Testing) over 10 years ago. When the NFL was searching for ways to determine safe post-concussion return to play, Mark Lovell, PhD; Joseph Maroon, MD; and Michael (Micky) Collins, PhD developed neurocognitive testing or ImPACT. Always seeking new and better ways to diagnose and treat his patients, Dr. Pegg flew off to Pittsburgh, Pennsylvania to learn firsthand from Drs. Lovell, Maroon, and Collins. He became one of the first credentialed and certified ImPACT consultants in the state of Illinois. He continues to use ImPACT to manage sport-related and non-sport-related concussions.

Dedicated Staff
“The more things change, the more we stay the same,” Dr. Pegg says. Health care has changed a lot over the past 30 years. Although some changes have been for the better, others have not. “Being an independent physician gives me the freedom to care for my patients as I see fit… as individuals,” he states. Dr. Pegg takes pride in his staff, often receiving compliments from patients, physicians, and other offices. Describing them as family, most have been with him since he ventured out on his own over eight years ago. In fact, his wife Carol, daughter Liz, daughter-in-law Heather, and brother Bob are all part of the team dedicated to providing exceptional care to his patients.

You’ll never have to “listen carefully and choose an option” when you call. You won’t get transferred to an off-site billing department, and you’ll never get a call from an automated system to which you can’t ask a question. “This allows us to establish a relationship with our patients, so they’re not just a number.”

Dr. Pegg prefers a hands-on approach when it comes to patient care. For this reason, he has not enlisted the help of a nurse practitioner or physician assistant. He feels the doctor/patient relationship is very important. Whether reviewing test results, answering questions or researching a medication, he personally cares for each and every patient that comes through his office.
Patient Priority

“The patient’s concerns are our concerns.” New patients and return patients alike find office hours and appointment scheduling convenient. Being an independent office allows for flexibility when needed. “Concussions usually involve children so we try to work them in the day we are called. It’s important to determine the severity of the concussion so we can shut down their physical activities, if needed. This results in faster concussion resolution. If severe pain is an issue, we strive to work with the patient to get prompt service and quick relief.”

Electromyography studies can evaluate a patient’s nerves. Similar to an electrician checking the wiring in your home, the EMG can check the health of the nerves and muscles in your body. It is used to diagnose conditions such as a pinched nerve in the neck or back, as well as peripheral nerve damage like carpal tunnel syndrome.

Ultrasound allows the doctor to actually see the very small structures (such as a nerve) in the arms and legs. Neuromuscular ultrasound is a diagnostic technique used to look for entrapped or damaged nerves in the extremities. New advances in ultrasound have allowed for painless visualization of nerves without the use of X-rays. It is more sensitive than MRI. The ultrasound compliments the EMG and helps in determining a cause and making a diagnosis. Dr. Pegg has been training for over a year with neuromuscular ultrasound and looks forward to offering this service to his patients. Currently, it is only available in the Chicago and St. Louis areas.

Not Just Sports
Over the past decade, Dr. Edward Pegg has become synonymous with concussion management in the Bloomington area. Recognizing the importance of testing athletes more susceptible to concussions, he has become a one-man army dedicated to keeping our athletes safe from potential debilitation. He has spearheaded the use of baseline concussion testing; pioneered the use of the ImPACT concussion-testing platform; and, most importantly, raised awareness of the general public to the real, long-term, and potentially life-threatening dangers a concussion poses. Dr. Pegg, in essence, has become the go-to neurologist for concussions.

On the other hand, back pain, neck pain, Multiple Sclerosis, migraines, neuromuscular disorders, seizures, dementia, and Parkinson’s disease are just a handful of the other neurological disorders he diagnoses and treats. Regardless of the neurological puzzle, it is Dr. Pegg’s goal and desire to solve it.