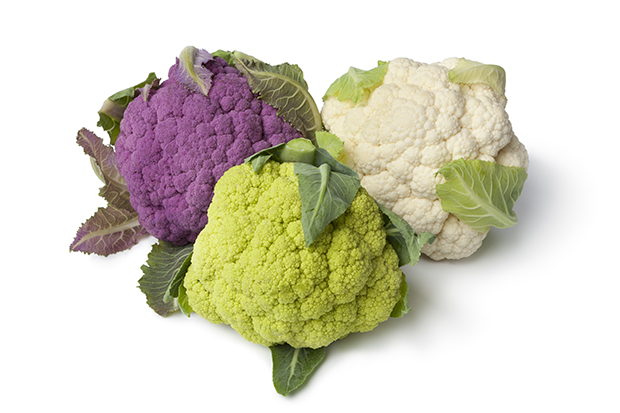 Cauliflower is my favorite vegetable,” exclaimed very few people, ever. It’s not hard to see why: the mealy texture and hefty bite make it a bit more work than most are willing to endure for the admittedly mild, some might say bland, flavor. Americans are mostly familiar with it in a filler and side-dish context. It’s the second-to-last vegetable to be picked for the team, so to speak — strong in a supporting role, but it’s never going to be the MVP. However, cauliflower has a hidden potential that might make you reconsider it for the first round of your meal draft.

Cauliflower is a plant that, as far as we know, has been cultivated before the birth of democracy, and they share a similar homeland in the Grecian/Turkish Mediterranean. The hallmark pale florets are actually slightly immature, closely packed flowers. They’re not the sort you’d find at the florist or put in a glass vase on the mantle, but at a certain point in maturity the dense flower crown begins to separate and comes to resemble something like a chunky, low-slung baby’s breath bush. That is, unless its growth has been strategically halted by a canny farmer, who uses the broad leaves of the plant to shield it from the sun and further growth. This agricultural trickery preserves the texture and nutrition of the flowering cruciferous vegetable.

There is a general bit of dietary advice that cautions us to avoid white foods: they tend to be starchy and stripped of nutrients, like white rice; or loaded with empty carbs, like white (refined) sugar. Instead, boldly colored vegetables usually indicate both ripeness and nutritional richness.  But the “no white foods” advice completely ignores the rule-breaking, nutritive punch of cauliflower. The white flower of Brassica oleracea is incredibly rich in vital minerals and vitamins in addition to having some unique antioxidant properties.

At its most basic, cauliflower is a highly filling food with very low caloric impact; a cup has only 29 calories, but contains 2 grams of protein, while providing you with 10 percent of your daily fiber needs. The magnesium and potassium in cauliflower are great for promoting cardiovascular health and fatigue recovery, and the very high vitamin C (around 77 percent of your daily requirement), beta-carotene, Vitamin K, and broad spectrum of B-complex vitamins are strong immune system and metabolic supporters.

Where cauliflower really shines, however, is its support of healthy aging and cell reproduction. It may look boring, but cauliflower contains a mother load of antioxidants. Vitamin C and beta-carotene are both yellow-orange carotenoids — plant pigments with strong antioxidant properties. Cauliflower also contains a not-insignificant amount of choline, which is noted for its ability to maintain healthy cell reproduction in many areas of the body.

It should be mentioned that there are significant rustlings to be heard about the glucosinolate content of cruciferous vegetables. Glucosinolates are responsible for the unflattering and pungent mustard-like aroma of steamed broccoli, but are also metabolized a into substance called sulforaphane. Sulforaphane is a potent agent for health, especially as a powerful, cancer-fighting antioxidant. Cauliflower also contains this substance, but mostly in the leaves, so unless you are also consuming the leaves (which are edible, but not particularly tasty), you won’t be getting as large of a dose of cancer-fighting compounds like you may believe you are. If you’re eating cruciferous veggies for that particular effect, you’re best sticking with the crucifers whose leaves we consume: kale, broccoli, arugula, collard greens, and cabbage.

If you’re interested in the health benefits for cauliflower but would like to enhance your experience, or you have picky little eaters at home, it should be noted that cauliflower comes in a variety of rainbow hues. The most impressive among them are the vivid purple and lime green varieties. With a color change comes an infusion of the phytonutrients associated with the new color and the antioxidants tied to them, but the taste isn’t greatly altered by a change in color. These somewhat exotic varieties are harder to come by than the garden-variety white cauliflower, but are a great playful alternative to infuse interest in a veggie your kids may otherwise shun.

You may be accustomed to encountering cauliflower in frozen vegetable medleys and side dishes, but recently, adventurous cooks have been capitalizing on cauliflower’s adaptability to bring it in off the sidelines and into many healthy, and somewhat unlikely sounding, dishes. Among the artful adaptions include cauliflower “steaks” that are sliced sections of the veggie’s head grilled up like a slab of meat, cauliflower “rice” which is finely chopped bits of the vegetable masquerading as the popular grain, cauliflower mash which is a substitute for mashed potatoes, and the very popular cauliflower pizza crust. You may have noticed a theme running through those entries; indeed, the sturdy texture and mild flavor of cauliflower withstands interpretation into other mediums and it is especially handy at transforming high carb, high starch, and high-calorie dishes into low carb, low calorie, and high fiber, “guilt-free” imposters of some of your favorite comfort foods. The specific methods to prepare these imposter dishes aren’t particularly complicated either.

Cauliflower can also be prepared by a more traditional method. If not being served on a vegetable and dip tray, most opt to boil it to soften it a bit. While a decent option, it is easy to over-boil the vegetable, ruining both the texture and destroying the bulk of its healthy nutrients. Boiling cauliflower for up to five minutes causes a loss of about a quarter of the nutrients and compounds, so if you must boil, do it for a short amount of time and give it an ice bath afterward. Options that don’t significantly harm the nutritional content include stir-frying, sautéing, roasting, or steaming — and pickled cauliflower is a zippy, tender treat.

The star player of dinnertime may be the main dish, but the supporting teammates makes the whole ensemble a success. Round out your roster with cauliflower for an all-star performance, or give it a promotion and make it an unexpected closer at mealtime.

Turmeric and other Indian spices are getting more and more attention for their anti-cancer properties.

Put them with known cancer-fighting vegetables and you’re in for real health food. For a hotter curry, increase the amount of cayenne.

Instructions
Heat 1/2 cup (125 milliliters) water in a large pot. Add onion and cook over medium-high heat for about 3 minutes, stirring occasionally, until onion begins to soften. Reduce heat to medium. Add potatoes and cauliflower. Continue cooking, stirring often, for about 5 minutes. Add water, 1/4 cup at a time, if needed to prevent sticking.

Toast cumin seeds, turmeric, coriander, ginger, cinnamon, and cayenne in a dry skillet over medium heat for about 2 minutes, stirring constantly. Add spices to vegetables along with tomatoes, and salt. Stir to mix, then cover and simmer for about 20 minutes until flavors are blended.

Stored in a covered container in the refrigerator, leftover Potato and Cauliflower Curry will keep for up to 3 days.
Variation: For a sweeter curry, add 1/2 cup golden raisins or 2 tablespoons of apple juice concentrate in with the tomatoes and salt.