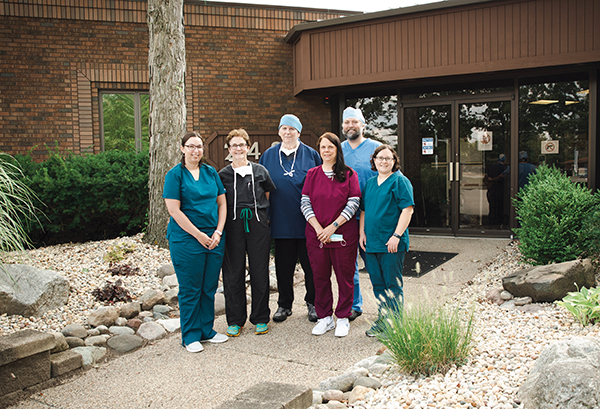 Nothing living can sustain itself without some system in place to transport nutrients. A city cannot subsist without a distribution of food to every household. The farms growing that food cannot thrive without delivery systems for water and fertilizer. And the human body cannot utilize the nutrients from that food or the oxygen breathed in from the air without the cardiovascular system.

The cardiovascular system—also called the circulatory system—is absolutely essential for the body to function properly overall. Blood needs to travel freely from the heart through the arteries and into the smaller blood vessels in order to nourish everything—from the brain to the feet and fingertips. Should anything interfere with the distribution network, a part of the body will suffer and may even die off.

Treating insufficiency of the blood vessels is why Cardiac Thoracic and Endovascular Therapies in Peoria exists. Led by Dr. James B. Williams, MD, FACS, ISES, Cardiac Thoracic is a safe, office-based setting where the body’s vascular system can be restored and nutrients can flow freely once again.

Revascularization
Should a farm be cut off from its water supply, whether due to drought or other conditions, crops can quickly wither and die. Should the body’s vascular system fail to deliver its supply of blood to the body’s extremities the consequences can be just as dire.

One type of vascular disease is called atherosclerosis, in which blockages are caused by accumulation of a sticky substance called plaque. Consisting of cellular waste, cholesterol, fat, calcium, and other substances, plaque acts like sludge in a water pipe or garden hose, constricting the flow of blood in the arteries and, subsequently, the different areas of the body.

People with atherosclerosis have an increased risk of stroke, heart attack, ischemia, kidney failure, and peripheral artery disease, among other things. In more extreme cases, amputation of an extremity can even result.

“The need for extremity amputation in the difficult set of patients—many with diabetes, a history of smoking, and open wounds—has plummeted because of the persistence in our efforts to restore blood supply,” the doctor continues. “We are successful many times because of the approach from the foot, and because we can use the latest technology, such as drug-delivering balloons. We are not always successful, but the amputation rate has fallen substantially.”

Easy In, Easy Out
During the very stressful past two years, some positives have actually resulted. Grocery shopping, for one, can now be almost a laid-back experience. Due to online ordering and drive-up order pick-ups, a necessary chore has now become less stressful.

Getting medical attention, believe it or not, can also be less stressful for similar reasons. “When patients are screened and selected appropriately, almost all peripheral vascular interventions can be performed in the office-based setting with minimal complications, and can be sent home within a few hours of the procedure,” Dr. Williams says. “We actively encourage our ‘easy in, easy out’ service advantages.”

This set up is not only less stressful for the patient but also for family members as they are no longer hassled by having to find a place to park or drop off their loved one. “You also see the same experienced and friendly faces,” adds the doctor.

Among those friendly faces is, naturally, Dr. Williams himself, a certified vascular (endovascular) surgeon with over 35 years of experience, along with a staff of registered nurses. “Also, we are an independent office-based facility,” Dr. Williams points out. “We are not owned by any hospital or healthcare system.”

“Since opening our independent office-based facility in Peoria, we have performed more than 3000 procedures on arteries and veins—the same population as a small city!” he states proudly. “The procedure performed from the foot is relatively new and not widely performed in many facilities.”

“No patients require general anesthesia, when entry is from the foot,” the doctor continues. “We utilize pills taken by mouth before the procedure and some intravenous pain medication, if required. Thus, the recovery is quick and side effects are minimal, allowing our patients to go home sooner.”

Blood loss, which is always a concern in surgery, has been another positive. In spite of using blood thinners and some invasive procedures, there has been no significant blood loss either during or after surgery for any patients. To date, not a single transfusion has been required.

“In spite of using dye, which is known to be hazardous to kidneys, we have no patients who have developed kidney failure, and many of our patients come to us with weak kidneys,” the doctor indicates. “We are careful to gently hydrate patients, and use ultrasound before and during the procedure. As a result, we use less than a teaspoon of dye in even the most difficult cases.”

Results Speak for Themselves
No statistic is quite as impressive as personal experience, however. For John and James, Dr. Williams’ work was not only impressive it saved life and limb.

John, 74, was a self-referral, who came to Cardiac Thoracic for an initial consultation in May 2021. “I could not walk more than 100 feet without developing pain in both calves, which forced me to stop walking just for relief,” John recalls. “I first had a procedure at another institution in April to open blockages in my left thigh, but I was told the arteries below my knee were completely closed and, unfortunately, there was nothing more they could do. I was told it might require an amputation.”

Fortunately for John, he had family and friends who had been treated at Cardiac Thoracic and suggested he request a second opinion. “He subsequently had this procedure from the foot, in our office,” Dr. Williams says, “which restored blood flow to an artery in his calf.”

James C., 84, was initially seen and treated in 2019 for chronic venous insufficiency, but had a lapse in care due to the COVID-19 restrictions later imposed. In April of this year, a wound clinic noted he had developed multiple large, draining wounds of his right calf, prompting their recommendation for James to return to Cardiac Thoracic for evaluation of arterial and venous insufficiency.

“I had to wear a grocery bag on my foot and leg over the bandages to catch the fluid that was leaking out, and empty it every 40 minutes,” James says.

After a procedure from the foot to restore arterial blood flow so he could tolerate adequate compression to stop the drainage, James’ wounds are now completely healed, and he is back to mowing his own lawn. “I have never met a crew like Dr. Williams’,” he beams. “They are compassionate and caring and treat you just like family. People who really care are hard to find.”

Serious Comfort
Of all of life’s necessities, those having to do with our health should be taken the most seriously. It is good to know Dr. Williams and the staff at Cardiac Thoracic and Endovascular Therapies take your health as seriously as you do.

But they also take your comfort just as seriously, which is why they strive for the most comfortable office setting in which to perform their life-saving procedures. Although Cardiac Thoracic may not be your actual home, the effective work they do there will get you back home soon, healthier, and happier.

Cardiac Thoracic and Endovascular Therapies is located at 2420 West Nebraska Ave. in Peoria, Illinois. If you wish to make an appointment, please call us at (309) 680-5000 or visit us on the web at www.cvendo.com. Back to Top
September 05, 2021
Categories:  Feature