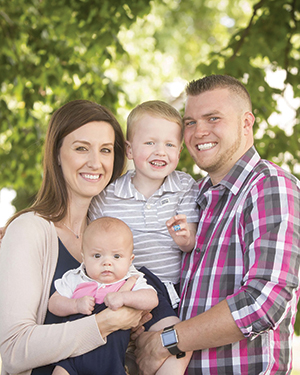 Four years ago, his wife Chelsea was pregnant with their first child, a baby boy they planned to name Milo. Their path to parenthood hit an unexpected bump in the road.

Chelsea had a negative blood type, and so she received the RhoGAM shot to protect her unborn baby. RhoGAM is an injection made up of antibodies called immunoglobulin, that help protect an unborn baby from its mother’s antibodies. The shot essentially prevents the Rh-negative mother from making antibodies during pregnancy.

Chelsea became RH sensitized, also known as fetomaternal hemorrhage, which is typically triggered when the RH-negative mother’s immune system develops antibodies against the antigens in her baby’s RH-positive blood.

Their son Milo was born at 39 weeks gestation and spent time in the Neonatal Intensive Care Unit (NICU). At just one week old, he received a lifesaving blood transfusion. Three days later, Milo went home — a happy and healthy baby.

Fast forward a couple of years, and the young family began to think about giving Milo a sibling. Since Chelsea had already been RH sensitized, they knew having a second child would be risky. Their doctors assured them that they were behind them in whatever decision they made, so Josh and Chelsea decided to go for a second baby. She became pregnant in 2016.

Things started out smoothly, but at week 23, their second child (another boy!) required a blood transfusion while still in the womb. In total, he ended up receiving five in-utero blood transfusions. Brooks made his way into this world at 32 weeks gestation. Upon delivery, he immediately received one more blood transfusion. Brooks spent several weeks in the NICU, but is now a healthy toddler.

Josh, a New Berlin (Illinois) firefighter, is so grateful for the science and for the blood donors who have helped his family. He was a blood donor before he had a family, but now has become a blood drive coordinator, hosting the “Beard Brothers Give Back” blood drive to help families like his own.

“Thank you from the bottom of our hearts. Both of our sons have needed blood transfusions, and for that, my wife and I thank you for what you do and for helping save both of our boys’ lives.”

They are always looking for more blood donors and more blood drive hosts, so if you’re interested in learning more about how you can help patients, visit www.bloodcenter.org or call 800-747-5401. Back to Top
December 06, 2018