Are You Ready to Re-Think Your Stuff? 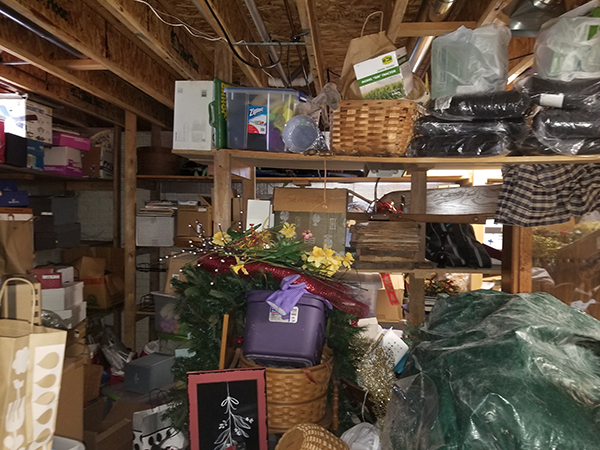 By Becky Rogers, Certified Professional Organizer® and Owner of Organize My Clutter

Where did all that stuff come from?” While working with clients we hear that question often. If you are like me, and most people I know, you have probably done all the things our culture dictated over the past several decades, and there is no shame in that. That was the culture of our lives. After the great depression era of the 1930’s our grandparents and great-grandparents had to save, re-use, and skimp on everything just to get by. So of course, that is how they raised their kids. By the time that generation could provide for themselves in the 50’s and 60’s, things were better, and shopping got easier with the rise of strip malls and franchising. And while they shopped, they still saved everything because it was what they were taught to do.

The next generation would provide for themselves in the 70’s and 80’s. Even with fluctuating economies, shopping and finding things they wanted just kept getting easier and easier. To top it off, they bought bigger homes than their parents, with rec-rooms, finished basements, and larger garages. With so much empty space to fill, it became too easy to let things pile up to deal with “later.” But many would still feel the need to save everything in case of an emergency, fearing what their grandparents had to deal with. In addition, they inherited things that had been passed down and getting rid of those things meant dishonoring someone’s memory.

In the 80’s and 90’s, the hobby of collecting became a more common practice and could be found in nearly every home. We collected things related to our family heirlooms for nostalgia. We collected antique furniture, propaganda, promotional products, dolls, figurines, toys, …you name it. And we couldn’t just have a few! We had to have the WHOLE collection so we could display it with pride. Now that heirloom piece was just another part of the collection. “This one belonged to my great grandmother, and I bought all of these at thrift markets.”

In the 80’s and 90’s kids had to live in it, hear about it, and some even had to dust all that stuff as part of their weekly chores (myself included, although I was a 70’s kid). These kids became the minimalist millennials of today, and they were ingrained with a new technology called the internet. They would be brought up learning how to use computers and the internet in a way that would keep them from EVER wanting to collect stuff. It’s no wonder minimalism has become so popular.

This is the world today:
Some people ask, “What if the internet goes down?” I say, “It’ll be back up the next day!” Today’s computer servers and backups are not going to lose data like they did 20, or even 10 years ago. It’s practically impossible to lose your data if you know how to protect it, so don’t overthink it. Instead, start by letting go of the unimportant stuff first.

Even if we were to go through another great depression, we will never be without stuff. Stuff is EVERYWHERE now. Just walk into any thrift store or look on the internet. Charities are so overwhelmed with stuff that many are turning things away. They either don’t have the room to keep it all, or they have so much of the same thing, they know they’ll never sell it. I know it’s hard to accept that so much of our stuff ends up in landfills—no matter how hard we try to donate and recycle—but that is a fact we now face, thanks to the past 90 years of our cultural evolution.

Depending on the charity, giving to people in need is usually more about health and safety, so giving them our dusty collectibles isn’t going to help them. They need practical everyday clothing, personal care items, food, shelter, transportation, jobs, and money. Everything else just takes up space.

Are you ready to re-think your stuff?
How many of these statements do you relate to?
If you are ready to let go, only donate things that are clean and still in good condition. Try not to make charity volunteers work harder than they need to. Be realistic. If you owned a thrift store, would you put it out for sale?

Of course, you can try to sell things yourself, online or in a rummage sale. Keep in mind, though, that those things are only financially worth what someone is willing to pay. Remember, your emotional attachment will make everything worth more to you, than to someone else. If you can’t find a buyer within a reasonable amount of time, that is a sign to just let it go, because times have changed, and YOUR time is more valuable!

Instead of focusing on the past, how, or why you originally acquired all that stuff, focus on your newfound freedom from clutter, and embrace simple living in the present.

For more information on professional organizing services, contact Organize My Clutter at 217-519-1919 or visit them online at www.OrganizeMyClutter.com. Becky and her team of organizers serve central Illinois areas including Bloomington, Champaign, Decatur, Peoria, Springfield, and beyond. In addition to organizing any space in your home, they offer services for home staging, space planning, unpacking, seniors and life transitions, paper/digital file organizing, time management, and organizing for special needs (physical or mental conditions). Back to Top
November 09, 2019