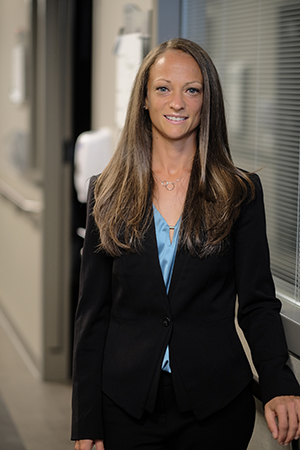 More than any pain reliever, anti-depressant, or blood pressure medicine, the number one thing physicians prescribe is exercise. After all, regular physical activity carries with it a never-ending list of benefits.

But if any prescription is not followed properly, disaster can result. This is as true with an exercise prescription as it is with any pill. While exercising, certain motions, particularly overextended or exaggerated movements, can result in injury.

At the Orthopaedic Specialists on Dexter Court in Davenport, these injuries are treated, repaired, or reconstructed in order to restore you to your exercise regimen as soon as possible.

ACL Expert
It’s nearly impossible to watch a football game, play soccer, or be engaged in the sporting world at all without hearing about someone injuring their anterior cruciate ligament (ACL). A tear of the ACL is one of the most common injuries of the knee for athletes. Orthopaedic surgeon Dr. Kristyn Darmafall is so familiar with these tears, she even credits them as one of the reasons she pursued her career in the first place.

“I knew early on that I wanted to be a doctor,” she recalls. “I discovered orthopaedic surgery before I was a teenager. I was a competitive soccer player through the college level. This was largely responsible for my orthopedic aspirations and specifically to pursue a sports medicine fellowship.”

The root cause of ACL tears was a sort of mystery for Dr. Darmafall, as not one ACL injury was incurred on her team during eight years of pre-college play, but collegiate play resulted in at least one per year. “I found it interesting,” she says. “I wanted to better understand and find out both how to prevent the injury—specifically in females, because of our higher rate of ACL tears when compared to our male counterparts—and finding ways to have the best outcome and decrease the likelihood of a second ACL injury. This became the focus of my research and a problem we continue to try and solve.”

Anatomy of the ACL
The anterior cruciate ligament, like many ligaments in the body, plays the roles of stabilizing and connecting bones together. Running diagonally through the knee, the ACL is situated in front of its partnering ligament, the posterior cruciate ligament. The two together form an x or cross, hence the cruciate part of their names. The ACL connects the femur to the tibia and resides behind the patella, or kneecap. Comprised mainly of collagen, the ACL is responsible for keeping the tibia in place in relation to the femur and stabilizes the leg during its normal range of motion.

When that range of motion is forced outside of the norm, damage to the ligament often results. “The most common way an ACL tear occurs is with a non-contact injury where the knee has a valgus moment in flexion,” Dr. Darmafall explains. “This usually occurs when landing from a jump, from a quick change of direction, or quick deceleration. A valgus knee moment is when the knee falls towards the other leg across the midline.”

Athletes and Non-athletes Alike
Naturally, sports are the number one cause of ACL injuries, so it comes as no surprise the majority of isolated ACL tear patients Dr. Darmafall sees are engaged in athletics—typically high school or college age. This does not mean people who do not engage in sports are immune to ligament injuries in the knee, however. “I also see this injury in adults from sporting and non-sporting accidents,” she adds. “Rarely, I will see this injury in a grade school-aged child.”

ACLs are only one of four ligaments in the knee Dr. Darmafall reconstructs. “I also manage multiligamentous knee injuries, which require at least two of the four knee ligaments to be torn,” she continues. “These are more typical from higher energy injuries but they can occur with an innocuous mechanism. Seventy-five percent of the multiligamentous knee injuries I see are associated with non-sporting mechanisms.”

Although a sedentary lifestyle leads to excessive health risks, it would be unfair to say exercise does not have a degree of risk as well. Dehydration, pulled muscles, and of course ligament tears can certainly come with the territory. Dr. Darmafall’s ACL patients all lead active lifestyles with nearly a third of them being current athletes.

Whether an athlete or simply an active individual, she says recovery after ACL reconstruction is similar, but she tailors each patient’s rehabilitation for their specific end goal. “If that includes returning to a high-risk sport, it typically is a longer duration for rehabilitation and additional functional testing for side-to-side (operative and non-operative knee) comparisons,” she illustrates. “If a patient’s goal is to return to work or less intense activities, the rehabilitation typically does not include the final phase of recovery, which is sport-specific conditioning, form monitoring, and correction (jump landing mechanics).”

From Reconstruction to Repair
With as common an injury as an ACL tear is, it’s no wonder there are several techniques that have been developed over the decades to reconstruct the damaged ligament.

The most traditional method of reconstruction utilizes grafts: taking a portion of similar tissue from another part of the patient’s body (autograft) or from a donor (allograft). “The traditional, most commonly used autografts were BTB (bone patellar tendon bone) and hamstring tendons,” Dr. Darmafall elucidates.

These grafts were once considered the gold standard for athletes, but recent data have proven similar outcomes can be reached using an all-soft tissue quadricep tendon instead. “In the past five years of performing these, I have seen very good results throughout the rehabilitation process with early passing scores on limb symmetry testing. The quadricep graft can also eliminate many of the post-operative complications associated with the BTB graft, specifically anterior knee pain,” the doctor confirms.

“There are many aspects to ACL reconstruction that can impact outcomes,” she continues. “I treat each patient individually including the best graft options for their goals—whether they be sports/exercise or work—and the best options for their body.”

While reconstruction using grafts has been the most tried and true method, more research is being poured into true repair of the torn ligament using implants. Attempted repairs in the past often met with high rates of retears, so study is ongoing to ensure lasting, positive outcomes, particularly as there are tremendous benefits to retaining the native ligament.

The Right Rx for You
Not all injuries, ACL or otherwise, necessarily require surgery. Many conditions Dr. Darmafall and her colleagues treat are done so through non-surgical means. “I review all appropriate treatment options with patients during their clinic appointments and together we decide on the treatment pathway,” she assures. “Non-surgical options can include physical therapy, periods of rest from activity, medications, injections, and bracing.”

Whatever your specific prescription for healing might be, those at Orthopaedic Specialists are dedicated to restoring the prescription everyone needs to fill: to be active and without pain.

Orthopaedic Specialists is located at 3385 Dexter Court, in Davenport, Iowa. If you are in need of a specialist or need an orthopaedic opinion, please contact us at (563) 344-9292 or you can visit us on the web at www.osquadcities.com. Back to Top
August 06, 2022
Categories:  Feature