A Life of Adjustments 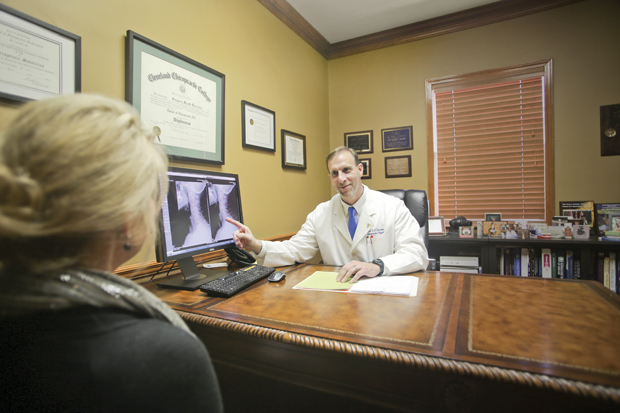 Dr. Greg Hairston became a licensed chiropractor because he needed one 20 years ago. Then, as a burling offensive lineman for Marshall University in West Virginia, Dr. Hairston was blocking a 300-pound defensive tackle when a running back slammed into his lower back. The next day he struggled to walk; he had severe low back damage and a fractured bone in his back.

He had intense low back problems that caused severe limitations. He did not want surgery. Finally, a friend suggested a chiropractor, and, by this point, he was willing to try anything. It worked.

“I couldn’t believe nobody told me about this,” says Dr. Hairston, who after playing junior college football, left Leland, Miss., and went on to play from 1992-1995 at the West Virginia school alongside future NFL players. “It took this injury for me to discover a treatment so valuable for patients with back and neck pain.”

He soon discovered that this treatment is used to help patients with bulging disc, herniated disc, sprains, strains, and even traumatic injuries such as automobile crashes.  He discovered that many patients are able to avoid back and neck surgery and get their health back. His interest kept growing and so did the desire to find out more.

And, a career was given birth. Dr. Hairston remained at Marshall University and finished his degree in exercise science and chemistry before going to Cleveland Chiropractic College in Kansas City, Missouri, in 1995. Then, he returned to Mississippi to open a clinic in Greenville in 2000. After visiting the Hattiesburg area many times, he and his family decided to move. In 2011, he closed the north Mississippi facility and opened one in Hattiesburg: essentially starting over, but aware that the region was growing.

He is also a 2010 graduate of the Spine Research Institute of San Diego (SRISD). Dr. Hairston is one of only two licensed chiropractors in Mississippi who hold advanced competency from this prestigious research organization.

Today, Hattiesburg-based Pine Belt Chiropractic (117 Thornhill Drive) has many patients and is growing with thriving interest. Some patients make the three-hour trek from Greenville. He has many patients who are willing to give written testimony of their results. Testimonies blanket the walls of his treatment rooms. Many of his new patients have been referrals from current patients who have been pleased with their results.

He currently has three assistants who are experienced and trained to apply a team approach and assist him in all aspects of treatment for the benefit of the patient.

That was the case for Kay Warren, who spends most of her week traveling across four states as a regional training manager for a local bank. Warren, age 66, started seeing Dr. Hairston in 2012 initially because she was having problems with her lower back and neck. She said the long hours in the car and picking up projectors and boxes contributed to recurring pain until she started visiting Pine Belt Chiropractic.

“I’ve tried medications, and I had previous chiropractic experience,” she says. “One of the things that compels me to continue going is the expertise and the team. Everyone seems to always be on the same page and the teamwork shows.”

Ms. Warren says she remains on a maintenance schedule, attending twice a month to ensure a high quality of life so she does not “get back in that shape again.”

Alternative Options Sought By Pros, Too
Dr. Matthew Matava, the St. Louis Rams’ head team doctor and president of the NFL Physicians Society, told USA Today Sports in December that every NFL team likely has a chiropractor on staff. The league continues to search for solutions that do not involve painkillers, even if all doctors are not buying-in.

Dr. Hairston was once unsure but became willing to learn after finding himself on the receiving end of the treatment that restored his quality of life. “I was on the table before too,” he says, offering that he continues to receive supportive chiropractic treatment. “We look at things totally different than any other doctor will.”

“Your body cannot heal appropriately under high pressure,” says Dr. Hairston. Restricted movement of spinal joints cause increased pressure and/or nervous system imbalance resulting in dysfunction and poor health. Once injured, these damaged tissues cause progressive limitations in life activities. This can cause progressive and permanent damage leading to premature degenerative disc disease and spinal stenosis affecting the nerve roots in your spine. This is a very unhealthy state for the patient and has severe consequences if neglected.

At Pine Belt Chiropractic, each patient gets a customized plan of care developed by Dr. Hairston. Treatment approach is through natural means. “Joints of the spine are progressively failing, leading to an altered quality of life. I have to concentrate on decreasing pressure from injured joints so my patients can correctly recover. Otherwise the patient’s condition will deteriorate,” Dr. Hairston says.

“It is my hope that more people become aware and learn more about the chiropractic profession. The state of Mississippi is one of the least populated chiropractic states so one can understand the need for more awareness and education. People are becoming more aware and discovering a natural form of health care,” Dr. Hairston says.

Wanda Young, who recently moved to Hattiesburg from Virginia, became one of Pine Belt Chiropractic’s newest patients during the summer after she could not get out of bed one morning.

Mundane tasks such as picking up her 10-pound puppy or getting dressed became herculean efforts; plus she found herself sitting down for long periods of time. She started having headaches. After some online research, she made an appointment and met with Dr. Hairston.

Mrs. Young, age 52, and a federal employee, says she was impressed from the start.

“He said if he couldn’t help me, he would refer me to someone who could. He wouldn’t waste my time,” she says. He showed her where the pain was coming from, began treatment, and even recommended exercises. The results speak for themselves. She says it has all been working well, and now she maintains a monthly visit.

Just recently, a friend of hers from Washington, DC called her and said she was having back pain, and Mrs. Young recommended she find a chiropractor. Then, she went a step further.

“I told her to call Dr. Hairston’s office and ask for a recommendation in her area,” she says. “I felt that strongly about his recommendation.”

Dr. Hairston has been in practice for 15 years. He and wife Allison are the proud parents of two children: 11-year-old daughter, Caroline, and 9-year-old son, John Paul. You can learn more about Dr. Hairston online at MyBackHurts.NET or call for your appointment at 601-268-8805. Back to Top
January 02, 2015
Categories:  Feature