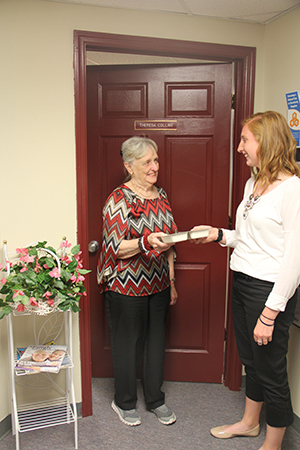 Submitted by Senior Services Plus

Senior Services Plus (SSP) in Alton, Illinois will once again bring country music stars to the Liberty Bank Alton Amphitheater in Riverfront Park for its 7th annual benefit concert supporting the organization’s Meals on Wheels program.

Senior Services Plus serves 22 townships in Madison and St. Clair counties with its Meals on Wheels program. The nonprofit United Way agency was established to help enrich the lives of older adults through programs and services that encourage independent living and provide opportunities and resources to individuals as they age.

Last year was SSP’s most successful show with headliner Alison Kraus and Union Station. This year, they expect the show to continue to grow with country singers Rodney Atkins and special guest Jana Kramer with the local Harman Family Bluegrass Band from Shipman, Illinois opening the show.

SSP’s Feed the Need concert is meant to bring the community together with the goal of raising awareness for and benefiting the agency’s Meals on Wheels program. The Meals on Wheels program helps low-income and at-risk seniors that rely on the program for 33 percent of their daily nutrition and allows them to remain living in their homes. The agency has seen drastic cuts to the program in recent months due to the state budget crisis, and proceeds from this benefit have become more important than ever.

The budget impasse continues to put tremendous pressure on SSP’s mission-driven services, which help vulnerable seniors live independently and safely in their homes. The program cuts were devastating to the Meals on Wheels and transportation programs, which have been providing services for over 43 years. In April 2015, a waiting list for Meals on Wheels was put in place, and until recently, over 130 seniors waited for services. When that waitlist was lifted, only 64 were added to the current recipient list due to unfortunate changes. This past February, deliveries were reduced to once a week of only four frozen meals instead of five hot being delivered once a day. The organization was also forced to stop older adult funded transportation that assisted seniors who needed transportation to medical treatments and appointments.

The need continues to increase as our aging population increases. In Madison County, there are over 53,000 individuals age 60+. Over the next 15 years, there will be over 1,700 people per year turning 60, and the need for services will only increase.

This year’s show will take place on Saturday, July 16 at the Liberty Bank Alton Amphitheater in Alton, Illinois. Gates will open at 6pm, with the show beginning at 7pm.

Rodney Atkins has had six number one hits from his first three albums, from “Watching You” and “These Are My People” to his most recent smashes, “Take a Back Road” and “Farmer’s Daughter,” which skyrocketed to platinum. He has sold over four million singles in the past five years. Atkins has received six nominations from the Academy of Country Music and two from the County Music Association, winning Top New Male Vocalist in 2006.

Jana Kramer will co-headline this year’s show. In just over three years, she has become one of country music’s brightest new stars. Many fans also know her from before her country music debut from her high-profile run on The CW’s cable channel show, One Tree Hill. Her platinum debut single, “Why Ya Wanna,” was number three on the Billboard Hot Country Songs chart in 2012, making her the most-played new artist that year.

In 2013, the Academy of Country Music honored her with its Top New Female Artist Award and was nominated this year for her first Female Vocalist of the Year award. In October of 2015, Kramer released her latest album, Thirty One, which debuted with career-best sales numbers. It landed in the Top 10 of the All-Genre Billboard 200 Albums chart and at number three on the Country Albums chart.

The Harman Family Bluegrass Band consists of first and second generation musicians with roots dating to 1975. The Harmans Family is a popular local band with a music style ranging from traditional to contemporary bluegrass, country, gospel, and other types of music.

General admission tickets are $40 each; premium reserved tickets are $55; VIP reserved are $65; and pit tickets are going to be available for $75. Tickets may be purchased online at www.metrotix.com, at the Alton Regional Convention and Visitors Bureau, or at Senior Services Plus, 2603 North Rodgers Ave. in Alton. Patrons can also purchase tickets online (www.libertybankaltonamphitheater.com) by clicking on the “buy tickets” button on the concert/event listing. A limited number of meet-and-greet tickets are available for both Rodney Atkins and Jana Kramer for an additional $50 per ticket. Those can only be purchased in person or over the phone with Senior Services Plus at 618-465-3298. Children under age five are free to get into the event.

SSP offers a wide variety of affordable services to all ages, from fitness and travel to Meals on Wheels and homecare. The organization
serves residents of Madison and St. Clair counties in Illinois and in St. Louis City and County. To find out more about the organization or this event, please visit www.seniorservicesplus.org, or call 618-465-3298. Back to Top
June 04, 2016
Keywords:  Feature Story